Army to rent, or why the US to fight with Syria 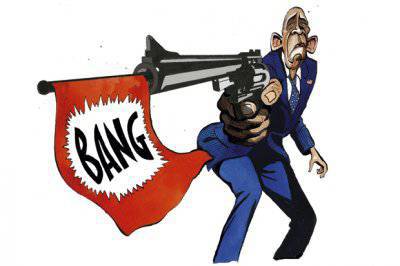 Rejecting as too convincing the idea that Barack Obama is an Islamist and a latent bearded man, and for this reason seeks to help Al Qaeda’s branches in Syria, analysts ask themselves: what does the US president in Syria really need? with such power puts pressure on Congress, allies and the world community? Wants to revive the former authority of the United States by another brilliant bombing with the smell of democracy, identical to the natural? The aim is to hire the armed forces in Saudi Arabia, which the American “Tomahawks” will pay with pleasure, why should the military industry and the state budget rise in the US? Maybe he is going to just hold a short war one, thereby proving that the Nobel Peace Prize laureate still has gunpowder?


John Rappoport found nine reasons to attack Syria. In fact, all these reasons merge into the list of benefits received by the United States (and, of course, personally by Obama) from attacking a long-suffering Arab country.

The appearance of the country's unification will be created for the president, who “did his job as expected,” addressing Congress. This will raise the political rating of Obama.

Those Americans who have bad brains, attacking Obama will be pleased with the "adrenaline rush."

The approval of the operation by the Congress will briefly revive among the people the illusion of America’s constitutionality.

The anti-Syrian plan is a "long-conceived American-Israeli plan." Syria must be destabilized and divided into hostile ethnic segments. The construction of a gas pipeline through Syria should be stopped, the author writes, then the Iranian economy should collapse. The Middle East must learn: the US is all-powerful, and the dollar remains the reserve currency in all oil operations.

The operation in Syria will satisfy the appetites of the US military-industrial complex.

Next, a long-term global goal is achieved: the entire Middle East will be “rewarded” with unbearable debt and suffering. Then the best banksters will come to the rescue: they will conduct a “perestroika” there and take possession of the region.

The Syrian attack will distract Americans from many scandals: the tragedy in Benghazi, the crimes of the Internal Revenue Service, the NSA spying, the unsuccessful and long war in Afghanistan, the poverty in the country, etc., etc.

And what have the “punishment of Assad for the use of chemical weapons", you ask. Yes, this is only a dubious scenario.

There is one more assumption, much more, let's say, a radical, rather than the harmonious concept of Comrade Rappoport.

Arab monarchies offered to assume the costs of US force intervention in Syria. This was announced on September 4 in Congress by John Kerry.

“With regard to the fact that the Arab countries offered to assume the cost and evaluate (her), the answer is yes, indeed. They offered. This sentence is being considered, "- quotes his words correspondent RIA "Novosti" Alexey Bogdanovsky.

“In fact, some of them said that if the US is ready to do all this, as we did earlier in other countries, they will take these costs. This is how they are devoted to us. This is not in the plans, and no one talks about it, but they talk about it seriously, ”added the head of the State Department.

And Saudi al-Faisal, the head of the Foreign Ministry of Saudi Arabia, said: “Arab countries must respond to the requests of the legitimate representatives of the Syrian people (opposition) for help from the international community in order to end the carnage.”

Many analysts, both Russian and Western, have decided: Barack Obama is leasing his army to the Saudis. The Saudis desire to overthrow Assad is the cause of potential American aggression against Syria. In addition, the problem of budget sequestration does not interfere here: after all, the operation will be paid for by the Gulf monarchies. On the contrary, the United States can make a profit: the military-industrial complex will find orders, the budget deficit will be filled with real money.

One of those authors who writes about the "sale" of the armed forces to "Arab feudal states" is Rainer Rupp. This is a German leftist publicist who worked in the economic department of NATO headquarters in Brussels. In 1994, he was sentenced to twelve years on charges of spying for the GDR and the USSR. The pro-communist German press refers to Rupp as "our man in NATO." This fellow wrote an article under the heading: "The United States sold its own armed forces for 90 days".

According to Secretary of State John Kerry, the author writes, in Syria there are “no al-Qaeda-related rebels at all.” He declared this on September 4, answering the congressman's question. The next day, Reuters news agency reported that Kerry, in its own words, contradicted "even its own American intelligence services", who constantly stressed that Islamic extremists in Syria "are the most combat-ready and most organized fighting units of the rebels."

Kerry tried to convince those senators who are concerned about the future state of the American economy: after all, costs are coming for the upcoming intervention. The State Secretary pleased them, saying that some "Arab states" had declared their readiness to take on the financing of a new war.

“It’s obvious that Kerry is ready to immediately sell all US military forces to Arab feudal states for the provision of mercenary services. And surprisingly, in America news did not cause any indignation. "

Concerning the fact that there is no al-Qaeda in Syria, comrade Putin said. He said about his sadness about the fact that the US Secretary of State is “lying”. Appropriate statement Putin did September 4 at the Human Rights Council.

As the president noted, to the congressman’s question about the presence of Al-Qaida in the conflict zone, Mr. Kerry replied that there were no representatives of this organization in Syria. Putin said:

Even a shout of American democracy, like the New York Times, writes about the atrocities of Islamists in Syria.

In the material under the heading "The brutality of the Syrian rebels puts the West in a dilemma" K. J. Chivers says about how the Syrian rebels posed, towering over the Syrian military. Five of the seven prisoners were bound, red scars were visible on their backs, their faces buried in the mud.

The militant commander 37-year-old Abdul Samad Issa recited poems: “For fifty years they have been companions of corruption. By our Lord on the Throne, our oath is: we will avenge. ”

With these words, the commander “fired a bullet in the head of the first prisoner. His arrows followed his example and, without delay, killed all the people lying at their feet. ”

The scene of the shooting is captured on video. “A few days ago, she was secretly taken out of Syria by a former rebel whose murder began to cause disgust,” explains the author of the article.

According to the former assistant Issa, videotapes were found in the mobile phones of the captured soldiers, indicating that the military had been raping and robbing civilians. Issa arranged a "revolutionary court." Why was it filmed on camera? For the sake of money: "According to the former assistant, Issa organized a video recording of the execution, to show the sponsors how hard he fights against Assad and his army, and ask for additional funding."

Funding is the American key to the planned attack on Syria. Financing the operation at the expense of the rich monarchies of the Gulf, profits for the US military-industrial complex and, accordingly, filling the budget, along with ensuring the stability of the petrodollar, in which Saudi Arabia and Qatar are taking a big part, have now wanted to "rent" the high-tech army that can kill and sow fear at a distance - this is what cumulatively explains the rigidity of Barack Hussein Obama, who has been actively involved in the PR and promotion of the military business under the slogan "Educate Assad." Famous people from the White House administration give interviews to the press, participate in talk shows, speak in Congress, struggling to convince citizens that the Syrian President needs a “lesson”, without which he will lose fear and harm everyone with his sarin. but the whole planet.

The interests of Saudi Arabia reminded Obama of former CIA, State Department and Pentagon officials. They sent a collective letter to the president, in which cautioned him from committing historical error.

According to twelve signatories, CIA head John Brennan is trying to repeat the Iraqi scenario, misleading both the Congress and the public. Former security services said that this person is absolutely not credible. The same applies to the director of national intelligence, James Klapper, who admitted that he gave an oath in the Congress "clearly erroneous testimony," denying the CIA's surveillance of American citizens. It was the Secretary of State Kerry who relied on the latter’s opinion, trying to increase the credibility of the Government Evaluation, a document prepared not even by intelligence, but by the White House.

Former US security officials argue that a growing number of evidence shows that the August 21 attack was a pre-planned provocation by opposition fighters and their supporters from Saudi Arabia and Turkey.

Thus, the petrodollar, once put into circulation not only financially, but also geopolitical, played a strange joke with the United States. According to Marx and Engels (see “German Ideology”), “circumstances as much create people as people create circumstances”. In 1970's In the energy-dependent and oil-and-gas producing world, suitable conditions were created for the realization and practical use of the fact that oil is an excellent means for strengthening the key currency, and then replicating this currency. Today, when, under Obama's reign, the economic crisis lifted the US national debt to record heights and “cut off” the budget, including military, petrodollar, created by experienced US businessmen in exchange for “ensuring security” of the Arab monarchies, with sequester, now has become a new factor in being, dictating conditions to its creators. Washington gradually degraded to the point that it began to dance to the tune of Saudi Arabia.

As for the American "shale" oil, it is just another financial bubble.

It is not surprising, therefore, that B. H. Obama has so few supporters in Congress and among ordinary citizens. If the latter can still be fooled with a talk show, then the inhabitants of the upper and lower chambers of the American parliament know all these tricks.

Senator McCain, they say, is an avid poker player. And unlucky: all the time loses. This “hawk” is an ardent supporter of the bombing of Syria. Do Saudi intelligence pay his card debts?

Observed and commented on Oleg Chuvakin
- especially for topwar.ru
Ctrl Enter
Noticed oshЫbku Highlight text and press. Ctrl + Enter
We are
Iran in the Syrian conflict. The confrontation with Saudi Arabia and the interests of the ShiitesWhite House bearded man
Military Reviewin Yandex News
Military Reviewin Google News
49 comments
Information
Dear reader, to leave comments on the publication, you must sign in.