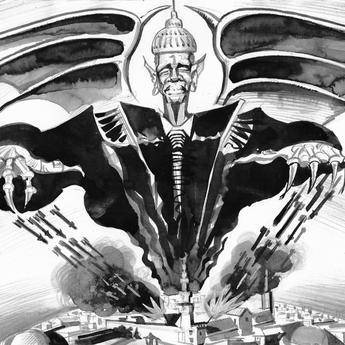 After the disappearance of the Soviet Union, America threw off a muzzle. There was a terrible mess with bloody eyes, with yellow foam at the mouth, from which stick tusks of missiles and aircraft carriers. Today's America is a new type of state that did not exist before. stories. We are still inclined to view America through the eyepiece of morality and ethics, democratic attitudes and freedom-loving principles. We still believe that America lives according to the Charter that the founding fathers once wrote. But America is a beast state, an animal state with iron smoking hair, on which stands the "666" brand.


The seers guessed it even when America dropped nuclear bombs on Hiroshima and Nagasaki. When she made a provocation in the Gulf of Tonkin to subject North Vietnam to carpet bombing. When she blew up her own twin towers, then to shovel the entire Islamic East. When she, through the mouth of the cheater Powell, claimed that Saddam possessed weapons mass destruction, and later, when Iraq turned into ruins, falsely apologized for the mistake.

Today America is the embodiment of cosmic darkness. World evil, wandering across the continents, trying to make a nest in a particular country, everything came to America. And it became what was called the state of antichrist in the sacred texts. A black monster with a Nobel peace dove on his shoulder covered the earth with webbed wings. From his clawed paws, bombs and flasks with bacteriological weapons are falling to the ground. And all of humanity, like a captive butterfly, is beating in the cruel web of this bloodthirsty spider.

Obama will not bomb Syria because Congressmen or geopoliticians, Jewish lobbyists or naval officers will advise him. fleet. He will do this according to the covenants of the forefathers of the Sedim tribe, who wandered in the deserts of history, waiting for their finest hour.

The star of America, squishing blood, is carved by tomahawks on the back of humanity. The Middle East is like a huge harp with taut strings. Hitting one string will cause the hum and roar of everyone else. And we will hear the music of the end of the world. Syria, Israel, Saudi Arabia, Qatar, Iran, Lebanon, Russia, China - here it is, a musical instrument that rumbles at the first strike of a winged American rocket in a Damascus mosque.

"First Syria - then Russia." I saw these clumsy - in Russian - inscriptions inscribed on the walls of the defeated Darayya gangsters near Damascus. Inscriptions left by al-Qaeda fighters that turned a flourishing country into burning ashes.

Russian pacifists assure us that nothing threatens today's Russia, that it has no enemies, that it lives in a safe world. Therefore, you should not spend money on defense, succumb to militaristic intoxication. Everyone who says that is liars, Obama's toadies, peacekeepers with a snake sting. All of them will leave Russia the day before they strike her. First Syria, then Iran, then Russia, then everywhere. They want to put us on this train of death, where the peacekeeper driver will jump out of the cabin before the train falls into the abyss.

Off illusions! America is a cruel enemy who destroyed the Soviet Union and is ready to destroy Russia. In the shortest possible time, Russia must restore the defense-industrial complex, which was destroyed by Gaidarians and Chubais. It must create combat systems capable of conducting operations in space, under water and on land. Block US organizational weapons, which plunged their poisoned darts into the minds of Russian people.

In these pre-war years, a strategic alliance between Russia and China is inevitable. Putin’s armaments program is not enough, for the jerk of which he spoke, the jerk, eliminating the technological gap, must be accompanied by a jerk of the whole ideology and social psychology. Such concepts as defense consciousness, the holiness of Russian weapons, defense philosophy, sacrifice and heroism, the doctrine of Russian victory must be revived. This is a wall about which cruise missiles of America will crash, the rays of its long-range lasers.

Next to the defense plants and launch mines are altars. In them, fiery Orthodoxy, Russian messianism, the idea of ​​the world as a battlefield, where not just armies fight, not just political and ideological systems, but world cosmogonies - the cosmogony of light and the cosmogony of darkness - converged in the utmost fight.

If in this fight the American beast wins, then the plan of the Lord, who created this world as the light shining in the darkness, as the desire of created mankind to the highest ideal of goodness, beauty and love - this idea is incorrect. So, the Lord himself is not faithful. And the black bat is faithful, generating utter darkness, which will again engulf the world, turning it into a sooty bathhouse with a black spider in the corner.

But this is impossible. The Lord is not mocked. The plan of the Lord cannot be undone. In the battle of light and darkness, light will conquer. From the black giant with bat wings will fall off its nasty membranes. His black skin slides off him. And it will decrease to the size of a stripped squirrel carcass, which is thrown on the rocks in the outskirts of Aleppo. And it will dry under the Syrian sun.