Poland and the Czech Republic independently upgrade their Mi-17 helicopters 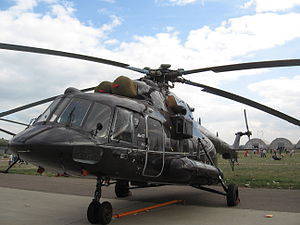 A consortium of two Czech and one Polish companies presented at the International Defense Exhibition MSPO-2013 in Kielce (Poland) a program for the modernization of Mi-17 / 171 helicopters.


According to the program, Lom Prague (Lom Praha) will carry out a full-scale overhaul of the Mi-17 / 171 glider and install new equipment on it, while the second Czech company, Vorrens, and the Polish company Navitek »(Navitec) will specialize in training programs and a training component, providing maintenance and support in operation, as well as staff training and mediation services in the acquisition of spare parts in Russia, Ukraine and other former Soviet republics.

The three partner companies will not be bound by a single legal entity or a “title-screen”, Managing Director of Warrence René Evchik told the Jaynes Defense Weekly. “They are cooperating in order to offer Poland the Mi-helicopter modernization program similar to the one we are successfully implementing in the Czech Republic,” he explained.

“The purpose of our presentation at MSPO-2013 is to demonstrate to the Polish armed forces our ability to modernize the Mi-17. We also see a niche in the market for such a solution, ”said Yevchik.

"We know that Poland is thinking about the possibility of upgrading the Mi-17, and we are fully certified by the Russian manufacturer of equipment for this kind of activity," he added

According to Yevchik, the modernization of the Mi-17 / 171 with the participation of three companies is not proposed to Poland “as a possible replacement for the helicopter tender currently being conducted by the Polish armed forces. Mi-17 does not belong to the type of small high-tech helicopter, for which the tender has been announced.

The Mi-17 has been used for over 30 years and has demonstrated its advantages in harsh conditions, for example, in Afghanistan. Therefore, he has his own task, different from that which can be performed by the cars participating in the tender, ”said a company representative.

The modernization program, which is already being implemented in the Czech Republic, includes two phases. Presented at the exhibition Mi-17 is one of six helicopters that have passed the first stage at the request of the Czech Ministry of Defense. Three machines have already completed the second stage of modernization, partially funded from the funds of the American military budget.

“Within the framework of the first stage of the program, the cockpit is being upgraded by equipping it with modern multifunctional displays, course glide systems and other equipment in order to fully“ Europeanize ”the platform, said Evchik. - In addition, many metal panels of the helicopter are replaced with parts made of composite materials (KM) of the second and third generations in order to protect the crew from gunfire weapons».

Within the framework of the second stage, the MI-17 / 171 is equipped with meteorological radar, an automatic trap device for dropping IR traps and an improved connector block in the tail section associated with the cockpit intercom system.

“This increases the versatility and survivability of the platform at low cost, since it does not make significant changes in avionics,” said Yevchik.