10 September 2013
184
The election campaign in Russia was spoiled by the Americans, and they spoiled it to their politically close friends: belolentechnik, headed by A. Navalny. The US propaganda training of the Syrian “humanitarian intervention”, one might say, absorbed our internal political discussion, and led to the growth of anti-American sentiment in the society. Nothing could be done about this circumstance, and our “friends of America” had no choice, how to make a good face on a bad game, to continue to broadcast our honesty and integrity, and to continue election provocations.


And they have been provoked. The “Navalny brothers” guessed creatively decorating with their propaganda monuments to famous people, actors and poets. To insult the memory of Vladimir Vysotsky, his son Nikita adequately replied: “I can’t find other words except for“ goats ”. Navalny hurried to pretend that he had nothing to do with it, and again he got caught: the candidate’s supporters were happy to share these “creative achievements” on Twitter, and Anna Veduta, the press secretary of Navalny, reposted these messages, spreading “best practices” to the masses ” reported "KP". 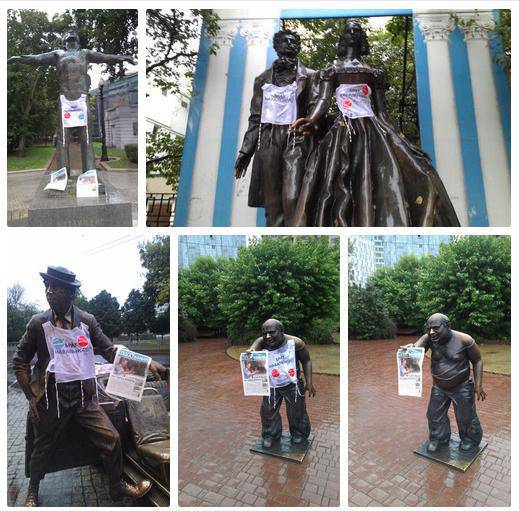 The Navalny brothers learned that the provocateurs hired by the Kremlin and the security services on Monday staged a disgusting action in Moscow: they hung on the monuments pieces of cloth with the inscription “Bulk Navalny” and stickers stolen from us by the police during the raid on the 13 apartment in August. A number of media outlets known for years of cooperation with the authorities (Vzglyad.ru, Komsomolskaya Pravda) immediately replicated information about this trick, attributing it to the Brothers.

The Navalny brothers declare that our community has nothing to do with this vile and stupid act. Hanging out campaigns on monuments is an obvious provocation of United Russia mercenaries and part of the campaign against Alexei Navalny. The motives of high-ranking customers of this hooliganism are explained only by one thing - the fear of the ruling elites in front of Navalny and the millions of Muscovites standing behind him. The Navalny brothers conduct their struggle exclusively within the framework of moral and ethical standards.

What they did, the agitators of Navalny simply did not understand, and to the outrage of their actions they responded in the spirit: "What is this?"

Thus, the “Navalny hamsters” class has been supplemented with the “Navalny goats” class, but this is not the final classification, for it is not yet clear where the liberal intelligentsia belong, which is silent, looking at the “goats” ... Indirectly, the “goat” falls, of course, and on Navalny, and this causes our creative liberals to be embarrassed.

In this difficult situation, Navalny turns to an authority that does not cause him any doubts, and maybe because he is the only true one. In an interview with RAR.RU, he speaks about the American president: “Obama is certainly an outstanding politician of the new time and one of the greatest speakers of our time. Like or Dislike, but your mark in stories he definitely left, and what else. ” A very relevant statement about Obama, especially now when he is preparing to inherit in Syria. It is felt that, speaking of Obama, Navalny is sincere, while his “fight against corruption” is just a PR, a soap bubble that doesn't matter, sooner or later, will burst.

So, these were the representatives of: Fair Russia, Yabloko (personally Mitrokhin, candidate for mayor of Moscow), the Communist Party of the Russian Federation and, of course, Parnassus (today A.Navalny represents him at the elections). Fools, they or candidates for ... something more - it does not matter. It is important that today they repeat the slogans of Navalny, and his "goats".

It is important that they themselves bowed to McFaul themselves, no one forcibly pulled them there, inviting McFaul to "participate" somehow and in Moscow events, voluntarily or involuntarily. And yet none of the walkers to McFaul never repented of this sin of theirs, but they have enough conscience to demand a report from others, and to flaunt their honesty and decency ...

The dividing line will soon be, apparently, not between the "red", "white" and others, but between the "goats" of Navalny and Nikita Vysotsky.

Ctrl Enter
Noticed oshЫbku Highlight text and press. Ctrl + Enter
We are
Bulk on the liberal iconostasis, or Prosecutors, gifts bringing (Review of the reactions of different parties)North Korea promises a “sea of ​​fire" in response to "provocations"
Military Reviewin Yandex News
Military Reviewin Google News
184 comments
Information
Dear reader, to leave comments on the publication, you must to register.