March 30 2013
9
After the first months of the 1 World War I, the front lines froze, fenced off with wire barriers and covered with minefields. It was during this period that the four-legged friends of humans, dogs, were suddenly widely used. The dogs were used as signalers, orderlies, watchmen, all countries taking part in the war. 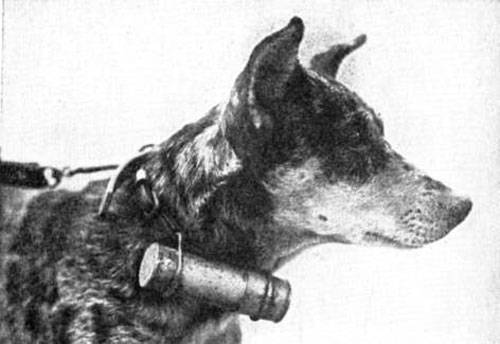 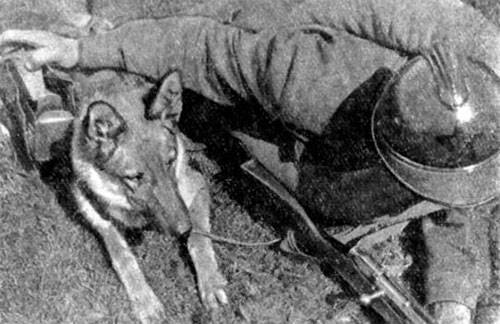 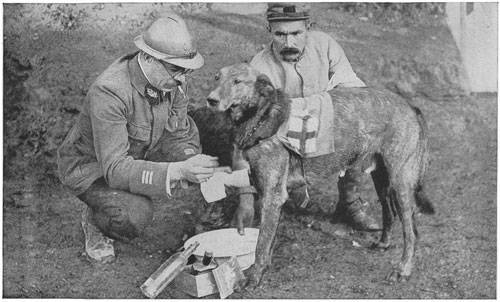 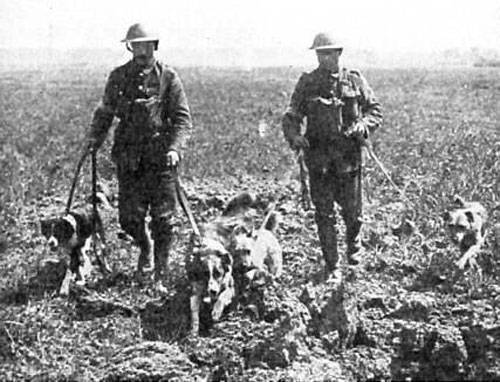 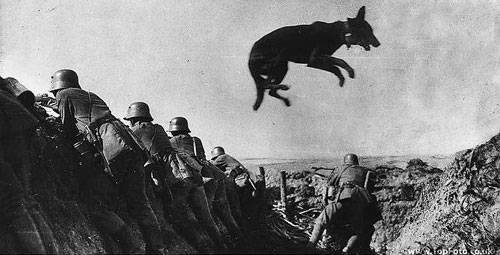 The first use of dogs in the Russian army decided to organize the command of the South-Western Front, a similar service appeared in the front line shelves. In the early spring of 1915, State Councilor Lebedev, in the city of Lviv in Ukraine, organized the “School of Military Guard and Sanitary Dogs”, before that he had successfully trained police dogs. The offensive of the Austrian army, which began in May 1915, forced the school to be evacuated to Kiev. Together with the relocation, there was a change of leadership, the staff captain Prince Shcherbatov, an experienced hunter and a military officer, was appointed to the position of head. The school has an approved staff and first instruction on the use of dogs. The instruction read: “With proper attitude and good training, the dog can become an indispensable assistant secretly at the front line, to detect enemy reconnaissance and disruptive parties, to report in cases of telephone rush under strong enemy fire and to search and pull out of the battlefield wounded warriors. ” The Skoda staff consisted of six instructors and 109 of the lower ranks, from which specialists trained in handling dogs. The school was mainly assigned to the positions of instructors, former non-commissioned officers of the police who could work with dogs, competent people from infantry and cavalry regiments and hunting teams were selected to the lower ranks. The quadrupeds contingent consisted of former police dogs, and dogs voluntarily transferred to the school by their owners, the number of cadets was recruited according to the number of dogs. In the autumn of 1916, 97 airedale terriers, 19 Dobermans, 12 hounds, 3 Central European Shepherd Dogs, 37 Belgian Shepherd Dogs and 21 trophy dogs were listed in the school.

The first graduates of the school went on the front line at the end of September 1916. 23 September 12 four-legged cadets who were trained were sent to the 136 th Taganrog and 145 th Novocherkassiy infantry regiments, 12 th Hussars of the Akhtyrsky regiment, Kabardinsky horse regiment. From this point on, the school began to carry out regular releases of trained dogs.

After the start of regular replenishment of dogs advanced combat units, the front command and the head of the school began to collect information about the real combat service issued by pets. Feedback from commanders of advanced units was mostly positive.

For example, the commander of the third Life Guards Rifle Regiment, Major General Usov 17 on January 1916 reported: "In view of the undoubted benefit brought by dogs when performing communication services, I ask you not to refuse to send six dogs to the regiment entrusted to me. For the expired period, the dogs for delivery reports were used repeatedly and always with success and benefit. But now the number of dogs decreased due to loss in battles. "

The commander of the 71 th Belevsky Infantry Regiment, Colonel Galkin gave the following review: "I sincerely thank you for sending the dog" Wolfr. "Serves fine. If possible, I would like to get one more, because one is not enough for service."

Finally, from the guerrilla unit 12 th cavalry division reported that the two dogs "made a lot of beautiful intelligence."
But there have been cases when some military leaders remained dissatisfied with their four-legged fighters.

So in March 1916, the commander of the 16 Infantry Regiment asked to deduct sent him to the service of dogs because of their unsuitability to the intelligence service. A similar report came from the 4 of the Zaamursky Border Infantry Regiment. It said: “two dogs, pulled down from a collar, ran away, one deafened, two poorly carried out guard service, apparently losing their instincts.”

The head of the school, Staff-captain Shcherbatov, noted that such misunderstandings were caused by the reluctance of officers to reckon with the opinion of instructors-counselors on the procedure and methods of using dogs, and the soldiers' habit of feeding their food was also harmful to the dogs. The spices and salt contained in the food partly beat the flair to the dogs, and in the school of dogs they were specially fed mostly raw meat.

However, in general, experiments with dogs on the front line received a positive assessment of the command of the divisions and armies of the South-Western Front.

Such a result of the first canine application at the forefront made the Head of the Main Head to think about equipping the entire active army with a four-legged squad. A telegram was sent to the commanders and chiefs of staffs of the armies, demanding to draw up reviews and demands on the need and number of dogs. In the reports received in response, it was reported that, in the opinion of most army leaders, it was necessary to organize regimental teams — for 6 dogs in cavalry and for 8 — in infantry.

The bid was approved by the staff on 2000 dogs. The school was given the task to supply the troops with the required number of dogs. The school did not have such a number of pets, so the head of the school suggested that the front commanders conduct a requisition of suitable dogs for military service with the population. The requisition for this event can be called quite conditionally, for trained dogs they were given a price of 60-125 rubles, for untrained 25-45 rubles. Greater preference was given to Airedale Terriers, Dobermans, Rottweilers and Sheepdogs.

Unfortunately, information about the future of the dog school and the pets it has released has not been preserved.

In conclusion, I would also like to mention the barbaric project of a certain Mr. V.P. Priklonsky, who proposed using dogs as living mines. According to the plan of Priklonsky, the mines should be fixed on the body of the dog or on the transported trolley; it was planned to use such live mines for the destruction of field-type fortifications and wire barriers. Against such a barbaric use of dogs, Shcherbatov, the head of the school, spoke out, which saved many lives of four-legged human friends.
Ctrl Enter
Noticed oshЫbku Highlight text and press. Ctrl + Enter
We are
The most faithful friend. Dogs in the service of people from antiquity to our timeDogs on the fronts of the Great Patriotic
Military Reviewin Yandex News
Military Reviewin Google News
9 comments
Information
Dear reader, to leave comments on the publication, you must to register.