There were six of them 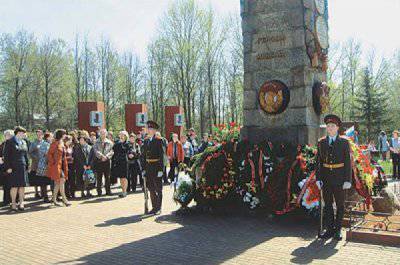 For two incomplete weeks, from April 22 to 4 of May 1943, an 31 squad of people under the general command of Lieutenant I. Dubovitsky from the 10 2nd separate peacekeeping battalion of the Kalinin miners was transferred to the enemy rear in small groups ( subsequently the 1 of the Baltic Front).


One of the groups was led by platoon commander, Senior Lieutenant Nikolai Kolosov. Having landed on the territory of the Rudnyansky district of the Smolensk region and having established contact with the partisans, the miners derailed more than one enemy train, undermined vehicles on the lines of communication, destroyed warehouses with ammunition, inflicting heavy losses on the enemy and disrupting his troop deployment plans.

On May 8, Kolosov’s group, which included five more miners besides him - Guards Senior Sergeant Vladimir Goryachev, Guards Junior Sergeant Vyacheslav Efimov, Private Guards Ivan Bazylev, Philip Bezrukov and Mikhail Myagky, were tasked on the Vitebsk-Smolensk railroad to undermine the enemy scout the movement of the enemy on the motorway and blow up the bridge.

For three days at night the miners traveled to the place of the combat mission. In the village of Savost Kolosov's group found and destroyed a heavily guarded large ammunition depot. Departing from pursuing the enemy, in the evening of May 11, the miners retreated to the forest near the village of Knyazhino and focused on the height of 207,8, where there was a stock of trotyl and mines.

Having taken all-round defense, the group dug trenches, mined the approaches, established land mines. However, the work was interrupted by the appearance of punishers who conducted the planned "cleansing" of the area from the guerrillas. Having let the Germans close, the guardsmen at once struck from the machine guns.

Interrupting the attack for a while, the enemy soon resumed it. But the second attempt to crush the mine was broken. The battle continued, as locals later told, for more than two hours. The Germans pulled guns and mortars. A reconnaissance plane appeared above the forest.

However, Kolosov outwitted the enemy. When the Germans hit the high-rise with shells and mines, there were no miners there. He took the group a hundred meters from the height, laying trotyl checkers at the abandoned trenches. And only the enemy chains rose to the top, as there was an explosion of such strength that only bloody shreds flew.

But the forces were unequal. No matter how heroically fought six miners, they all fell on the battlefield. Brutal punishers outraged their bodies: they gouged out their eyes, cut off their ears, noses and pierced with bayonets.

Residents of the villages of Knyazhino and Dubrovitsy, Ivan Zakharenkov, Matryona Shukayeva, Maria Sazonenkova, and ten more old men, women, and children, who were brought to the place of battle by old man Trofim, shaken by the courage of our soldiers, knelt down. They dug a mass grave and, using the bottom of fir fir branches and young birch branches, lowered the bodies of the heroes into it.

After the liberation of the Smolensk region about the feat became known to our command. The fact of the heroic actions of the Kolosov group was also confirmed by the partisans of the Vishnev brigade, which the miners helped to break away from the punishers.

At the site of the last battle of Kolosov’s group, a medallion was written by Bezrukov. “Here, at the village of Knyazhino, after the explosion of the warehouse, the last battle with the Nazis was conducted by the guardsmen, the miners-reconnaissance senior lieutenant Kolosov Nikolai Vasilyevich - turner from Furmanov, twenty-four years old; Senior Sergeant Goryachev Volodya - a schoolboy from Omsk, nineteen; Junior Sergeant Slava Efimov - a student from Kalinin, nineteen; Red Army soldiers Bazylev Vanya - Komsomol of the Boltutinsky collective farm, twenty-one; Misha Myagny - an employee from the Belgorod region, twenty-one, and I, Bezrukov Philip - a worker from Chelyabinsk, twenty-two years old. Farewell! Live well after the war, peacefully! Written on 12 May 1943. ”.

By order of the commander of the 1 Baltic Front from December 4 1943 of the year No. 0164, six brave miners were presented to the rank of Hero of the Soviet Union (posthumously). By the same document it was prescribed to enlist them forever in the lists of the 1-th company of the 10-th separate guard battalion of miners.

At the grave of the miners in the village of Knyazhino, the warriors of the 1 of the Baltic Front erected a stele made by students of the Smolensk State Technical University No. 10 named after Nikolai Ostrovsky.

By the 30 anniversary of Victory, the remains of brave miners were reburied in a picturesque corner of the village of Mikulino on a high hill. Above the mass grave, perhaps, the only one in the country where six Heroes of the Soviet Union are buried, a magnificent 12-meter-high granite monument with their carved names was erected. In May, on the 70 anniversary of the exploits of the miners, memorable events were held here with the participation of regional and municipal leaders of Smolensk region, local residents, garrison soldiers, delegations from Moscow, Kaliningrad, fraternal Belarus. The delegation of engineering troops was led by retired Lieutenant-General Nikolai Topilin.

Ctrl Enter
Noticed oshЫbku Highlight text and press. Ctrl + Enter
We are
Guards minersBy the 70 anniversary of the landing and the formation of a bridgehead Small land
Military Reviewin Yandex News
Military Reviewin Google News
15 comments
Information
Dear reader, to leave comments on the publication, you must to register.