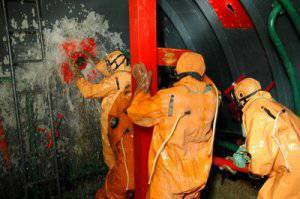 The head of the Navy’s search and rescue service, Captain 1 of rank Damir SHAYHUTDINOV, became the guest of the next release of the program “Military Council”, which goes to Ekho Moskvy radio station and Zvezda TV channel.


- In August, with which many tragic events are associated with our country, we all remembered the Kursk submarine that sank 13 years, its crew members ...

“In my opinion, the most important thing we did after the tragedy of Kursk,” they looked at the state of affairs soberly. Not only in the rescue case, but in general in the Navy. This encouraged us to pay more attention to the quality of military training events and the training of military personnel. After all, the most important thing is the willingness of people to competently maintain complex technical means and correctly apply them.

Conclusions are drawn. Every year we successfully carry out on each navy exercises of search and rescue units in order to prove their readiness in practice, as well as to show submariners that there are still forces that can come to their aid.

We have received an impetus to the development, primarily through the means of rendering assistance, especially robotic ones. These are unmanned, remote-controlled underwater vehicles.

Our industry has already mastered diving equipment, with which we carry out work "on the air." These are diving descents up to 60 m. But we have difficulties in mastering great depths. Today, the Navy has two rescue vessels, the Alades and Epron, with deep-sea diving complexes and the VG-200 diving equipment, with the help of which we are able to perform diving work at depths up to 200 m no longer “in the air” , and breathing gas mixtures.

- "In the air" - this means that the air is supplied from the surface?

- Normal air through the filters from the surface, through the air reservoir is supplied to the diver. But man is adapted to live on earth. And with an increase in pressure when immersed under water, nitrogen begins to adversely affect a person. At great depths it has a narcotic effect. A person loses composure, roughly speaking, becomes drunk. Breathing ordinary air, we do not even attach any importance to this.

A mark in 60 m - an average figure established empirically, thanks to the development of our special physiology diving department.

- You are talking about nitrogen that is in our blood ...

- We breathe air in which there is nitrogen. Naturally, this air is dissolved in the blood. When a person goes under water, he is under pressure, which increases the ability of a gas to dissolve in a liquid. Nitrogen is dissolved in the blood and begins its narcotic effect. Similarly, oxygen begins its detrimental effect on humans. At great depths, oxygen poisoning is already occurring. Therefore, in gas mixtures for divers, we replace nitrogen with an inert gas — helium.

The diver descends according to his state of health, and rises according to the regime, so that the gases dissolved in the blood come out naturally, and not as bubbles, turning the blood into "champagne". I emphasize that being a rescue diver is hard work, hard work, for which you need to have a certain margin of safety.

- Do you need some kind of hoses to supply a mixture or air, or is it all in the knapsack behind the diver?

- In the knapsack behind the back of a deep-sea diver there is an emergency air supply. All gas breathing mixes, as well as hot water for heating the diver (it’s cold underneath the water, and not enough sweaters under the diving suit) is supplied through the hoses from the vessel. Deep-sea diving complex - this is a whole system, it is half the vessel. It can be said that the diving ship is built around a diving complex.

- How does weather at sea affect rescue operations?

- It all depends on the carrier ship. The main thing is that the ship, from which diving work is being carried out, firmly stood directly above the object of diving work, without moving or moving.

- What is the training of rescue divers now? What stages is it divided into?

- Divers prepare the naval school of junior specialists in Sevastopol, the course takes at least five months. Practical training is held at the diving range. Step by step, the sailors work out all the actions at depths to 20, 45, 60. Deep-sea divers then take a course on the Epron rescue ship. Practiced by the actions of divers and in the event of various emergencies.

- Do you take part in international exercises?

- International cooperation and cooperation in the search and rescue of emergency submarines is an important area along which, in general, the whole world is moving. In the course of international exercises, practical actions are being carried out to rescue submariners from submarines.

I personally engaged in teaching in 2011 in the Spanish Cartagena, where Russia sent a large detachment of forces — the rescue ship Epron, the rescue tug Shakhtar and the submarine Alrosa. There, for the first time in practice, we were convinced that the rescue devices of the Russian WFM were capable of rescuing submariners from NATO submarines. Our rescue devices are made according to a single standard.

From a foreign submarine lying on the ground, with the help of our rescue bell, we pulled submariners. At the same time, our submariners were withdrawn from the submarine "Alrosa" using the "Makin bell" and other NATO rescue systems.

Every year we participate in meetings of working groups held in Amsterdam, where there is a mutual exchange of the latest achievements in rescue technologies, diving medicine, in the creation of rescue devices.

- How does the rescue bell work?

- The bell goes down to the submarine by means of a cable, which is either taken out by an emergency rescue buoy, or fixed on the submarine by divers or an unmanned remote-controlled vehicle, for example, Panther or Scorpio, if we are talking about the UK, or weapons in the Russian Navy and in Western countries.

The rescue bell, like the rescue vehicle, has a prechamber at the bottom. When this rescue device goes to the submarine, there is water. And the pressure in this prechamber is equal to outboard pressure. The submersible sits tightly on the platform through its propellers. He is centered, convinced that he is sitting on the platform. Then from the prechamber water is discharged into the replacement tank. Thus, it turns out that the pressure in the pre-chamber is compared with atmospheric ... Discharging - and sucked. And with great power. At a depth of 100-200 m, the pressure per centimeter is 20 kg. This force and presses. Then the hatches open, and people transfer to the rescue vehicle.

- It’s good when everything is aligned with the horizon level, and when is it on the side?

- It's not a problem. Existing old vehicles stick with a roll up to 15 degrees, a rescue bell up to 30, but the built Bestor-1 rescue device, which is currently located in Nizhny Novgorod, where it is simulated deep-water diving in a docking chamber, has a special device, allowing to stick to the submarine with roll or trim up to 45 degrees.

- Can one submarine approach the other and take personnel from board to board?

- In the Soviet Union there were two submarines of the 940 project Linok. And the experience of saving this way was.

Now we are gone from this. You know, preparing rescuers for the sake of rescuers is unwise. It makes sense to direct efforts to other areas, such as the creation of safe submarines and the development of a training network for the training of submariners. By the way, now our submariners are practically on 100 percent - contract servicemen.

On submarines, we require rescue devices to be reliable, comfortable, efficient. And the most important thing is that servicemen are able to use them.

- Please tell us about the planned launch of the new rescue ships into the water ...

- There is a saying: "The fleet has no problems, the fleet has tasks." And one of my most important tasks is the formation of tactical and technical tasks. We must tell the industry what we need.

Last year, when forming a state defense order, we placed an order for the construction of new vessels. At the moment, the line of small ships is almost completely covered. Plant "Nizhny Novgorod ship" builds four diving boats for the Black Sea Fleet. Officers of the Black Sea Fleet came there and were pleased with what they saw. In October-November, state trials of these vessels are planned in the Novorossiysk area. 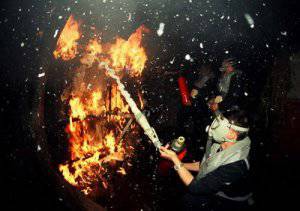 Starting next year, the delivery of rescue tugboats for the Baltic Fleet will begin.

The construction of the Admiralty shipyards of the rescue ship "Igor Belousov" continues. It was a very difficult organizational process. Now all decisions have been made, the delivery of equipment continues. Readiness percentage is on the order of 65 percent. From December, mooring trials will begin, by April of next year we plan to switch to sea trials, we will start testing the diving complex directly. By the end of 2014, we must receive this vessel. In the near future, we are planning orders for the construction of ships of the ocean class.

I note that recently a significant event happened. Launching a new integrated supply vessel opened a new direction in shipbuilding. This is a modular platform boat, designed not so much for transporting divers and diving descents, as for carrying out diving and rescue operations, when it is necessary not only to safely lower and raise the diver, but also to ensure his work under water. That is, so that the diver could carry out welding work, peel something, pick it up.

- And how does this platform work?

“Besides stationary equipment, everything you need can be placed on it in a container.” The boat has a standard set. This is a pressure chamber, pumps, welding equipment, etc. But everything else that may be needed, such as a hydraulic tool or a fire module, is placed on the deck. That is, depending on the situation and the task, you can always add something to the standard equipment.

- you interact with aviation?

- Required. Our western colleagues pay very much attention to it. They have somewhat different management documents, and in the event of an emergency, the crew quickly leaves the emergency submarine, and at the top they are already waiting for the rescue parachute group, which scatter on the water inflatable platforms, creating, one might say, a floating city.

We try to learn from this experience. We also have rescue parachute groups, and we plan to purchase communications equipment and parachute systems for them. This is another direction of development.

- Of course, we have a certain fraternity. Such castes exist, it seems to me, everywhere in the army and navy. They are paratroopers, marines, scouts, pilots, military doctors and other real pros of their field.