10 September 2013
24
Remote-controlled military equipment is becoming more widespread. There are a considerable number of similar machines for various purposes and the number of such projects is constantly increasing. Some of these developments have already firmly entered the structure of the armed forces (unmanned aerial vehicles, etc.), while others are still only at the design or testing stage. At the same time, for several reasons, the greatest attention is currently being paid to remotely controlled aircraft and helicopters. Unmanned Tanks or self-propelled artillery mounts have not yet become a combat weapon of the armies. Nevertheless, work in this direction is already underway. Back in 2007, BAE Systems published information about its new project designed to solve this problem. 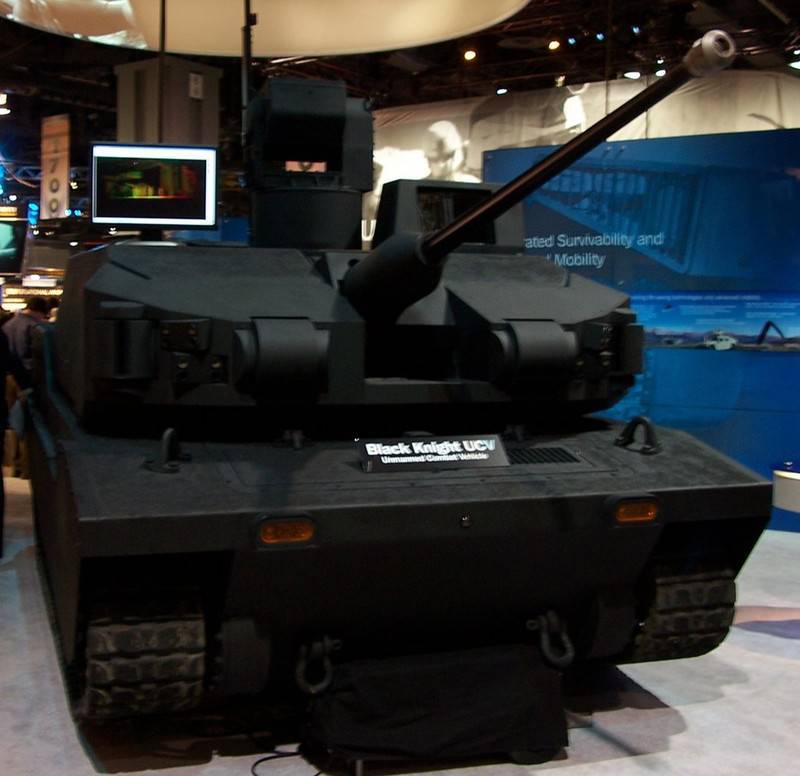 In the first half of the last decade, BAE Systems specialists were actively engaged in the problem of creating ground-based combat equipment that did not need the direct presence of a crew. The work was carried out under the program UGV (Unmanned Ground Vehicle - "Unmanned Ground Vehicle"). The aim of the project was to create the basic systems and technologies necessary for the development of a full-fledged combat vehicle for the ground forces. The first results of the UGV program appeared in the middle of the two thousandth. In 2006, the first tests of a specially created experimental machine took place, and by the end of next year, BAE Systems had published some technical details.

The first result of the UGV program was an experimental Black Knight armored vehicle (“Black Knight”), built, roughly, in the 2006 year. Some components of the M2 Bradley infantry fighting vehicle were widely used in its design. "Black Knight" is a fighting machine, resembling a tank, but with the protection and weaponry at the level of the BMP. This appearance was due to the experimental nature of the project. The first Black Knight prototype was built exclusively for working out basic technical solutions, which is why future production machines built using the solutions and technologies obtained are likely to have a different look.

However, in its current form, the “Black Knight” can find its niche in the structure of the ground forces. Fighting machine is a kind of tank of small size. The length of the experimental machine does not exceed 5 meters, the width is equal to 2,44 m, the height is no more than 2 m. The combat weight of the prototype is approximately equal to 9,5 tons. Dimensions and weight allow the Black Knight to be transported on the Lockheed C-130 medium military transport aircraft. So far this is only an interesting feature of the project, but in the future, weight and dimensional characteristics can help find the use of new combat vehicles. 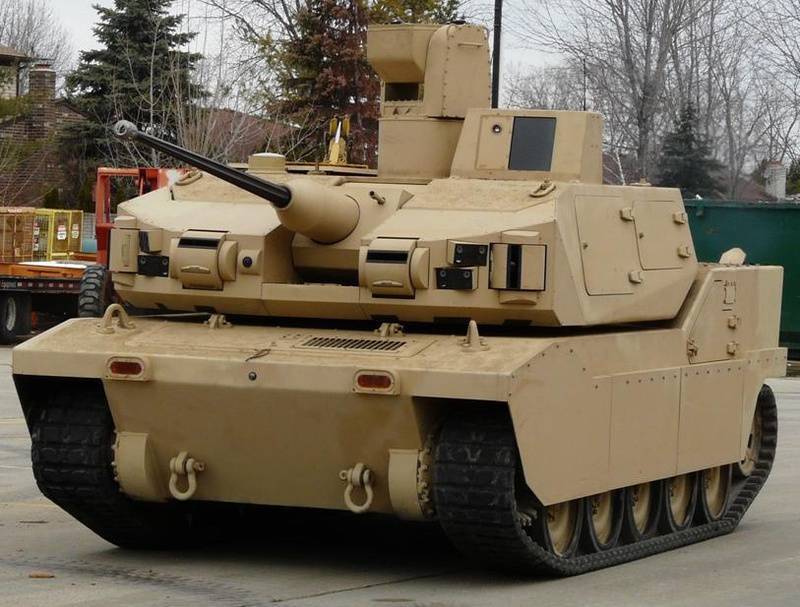 The first Black Knight prototype is equipped with a Caterpillar engine with horsepower 300. As can be seen in the available photos, the engine compartment is located in the front of the case. The tracked undercarriage incorporates five road wheels on board. Having such a power plant and a chassis prototype machine "Black Knight", allegedly on the highway can reach speeds up to 77 kilometers per hour. Other driving performance has not yet been announced.

On the case of the machine is mounted a relatively large tower. Judging by its size, the bulk of its internal volumes is given for various electronic equipment. In addition to electronics, Black Knight carries weapons similar to arms BMN M2 Bradley. This is an automatic gun M242 caliber 25 millimeters and 7,62-mm machine gun M240 paired with it. Probably, the choice of weapons, as well as in the case with the general appearance, was due to the experimental nature of the project. 25-mm gun and machine gun are sufficient to test the general capabilities of new radio-electronic systems. 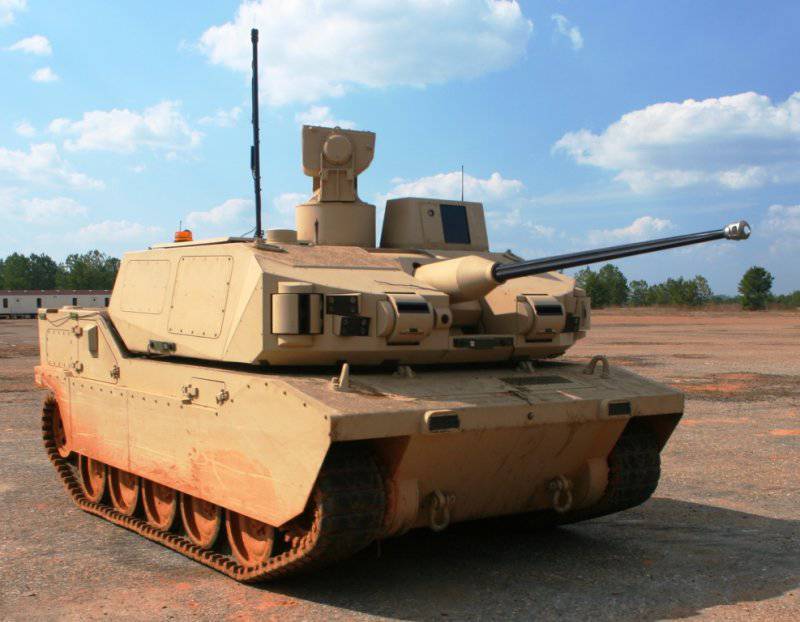 The front and top of the tower of the "Black Knight" are equipped with numerous sensors and systems. Thus, one of several video cameras was installed next to the weaponry. In addition, on the front of the tower there are four (two on each cheekbone) block of stereoscopic video cameras. Such equipment is used to enable the operator of the complex to drive a car, having a complete picture of the environment, which is slightly different from that observed through ordinary viewing instruments. On the front of the tower and on the cheekbones, there are four laser radars (LADAR) on the turning devices. As can be seen from their location, the middle two (sides of weapons) scan the terrain in a horizontal plane, and the two extreme (on the cheekbones of the tower) - in the vertical. On the roof of the tower in a characteristic trapezoidal casing there are video cameras for driving and aiming. As a panoramic observational device used cameras on a rotatable installation. In addition, the tower has a data antenna, a GPS navigation system receiver and a number of other systems.

All information collected by cameras, radars and sensors is transmitted via a secure radio channel to a ROCS control station (Robotic Operator Control Station). It is assumed that the control panel and all associated systems will be executed in the form of a compact portable console or placed on any armored vehicle, for example, on the M2 Bradley BMP or any other suitable vehicle. The ROCS station displays all the necessary driving information about the operation of the systems of the controlled machine, as well as information about the route, goals and objectives. The main control body is a controller with a large number of buttons and switches. If necessary, some of the functions, such as motion control or search for targets, can be assigned to the electronics operating in automatic mode. 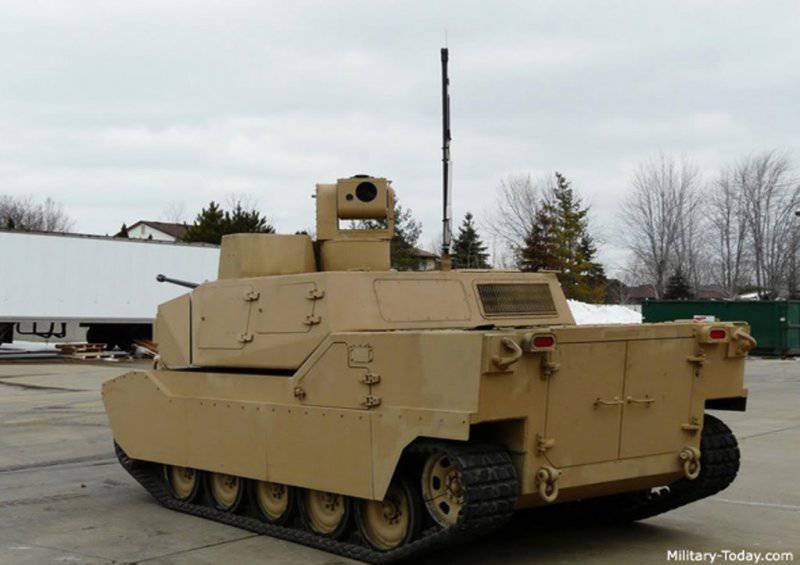 As stated in the first press releases, some technical solutions were tested during the 2006 tests of the year. One of the main goals of these works was to work out the movement of the machine along the route using remote control and management systems, including overcoming various obstacles. In 2007, the first tests with the use of weapons took place. So, in January, 2007, during tests at the Fort Knox (Kentucky) test site, operators who were in the M2 Bradley BMB at some distance from the Black Knight machine, managed to take it to the position, and then detect and destroy the training target. In addition, during these tests, automatic control showed itself well, which coped well with driving an armored vehicle and searching for targets.

According to recent reports, the designers of BAE Systems continued to work on improving the performance of the Black Knight. Among the goals was the complete integration of the control and communications complex of the remotely controlled armored vehicle with the existing military communications and control system. In addition, a promising combat vehicle should be able to move independently along the designated route, with only partial information about the landscape. In this case, it was separately noted that the decision to open fire always remained and remains for the operator.

The latest information on the progress of the UGV program as a whole and the Black Knight project was announced only a few years ago. Which way the project is going at present remains unknown. In addition, a number of issues that have emerged several years ago remain relevant. For example, there is still no information about the potential possibility not only of independent movement of a combat vehicle, but also of fully autonomous work on searching and attacking targets. Another important issue is the scope of application of advanced remote-controlled combat vehicles. Among other options, work was called as a reconnaissance vehicle, as well as escorting infantry fighting vehicles on the march and during operations. 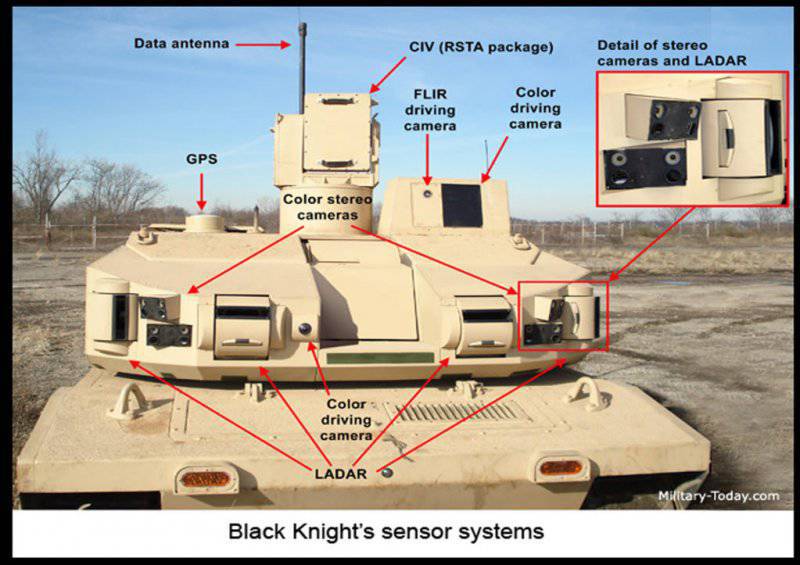 Judging by the absence News in recent years, the UGV program, as well as part of it in the form of the Black Knight project, has become seriously stuck at the stage of testing and experimental testing. Thus, in the near future, the UGV program may become the basis for a new project of remotely controlled ground equipment suitable for practical use in the army. On the other hand, the complexity of such projects may lead to a different result. The creation of remotely controlled equipment is a rather complicated task. The development of similar projects, involving the possibility of full automatic operation, is becoming an even more difficult problem. Apparently, BAE Systems is currently facing some difficulties, which led to a serious delay in the project.