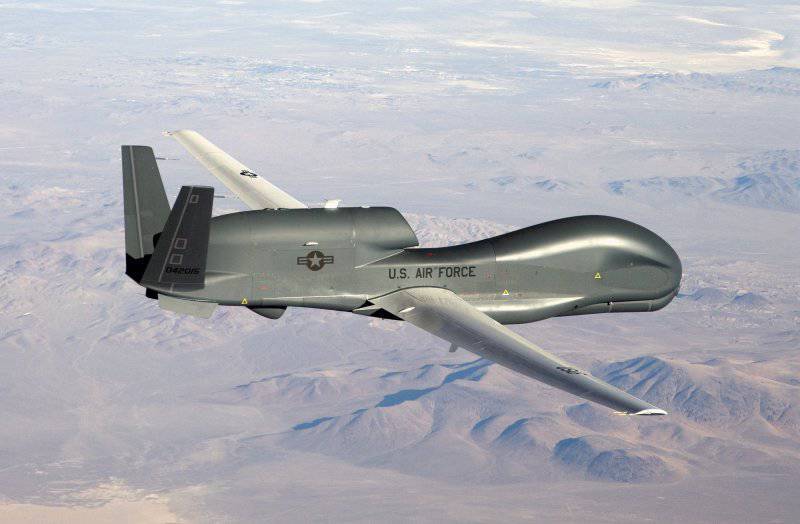 The program to create a UAV RQ-4 Global Hawk was launched in May 1995, when the project Teledyne Ryan Aeronautical (TRA) was announced the winner in the competition for the best UAV on the Tier II + program. The competition lasted 6 months, it was attended by five companies - applicants.
The new drone, among other things, was considered as a replacement for the long-range high-altitude reconnaissance Lockheed U-2, which was operated from the 1956 of the year.
The company Teledyne Ryan already had experience designing UAVs. Created by this company long-range high-altitude reconnaissance AQM-34 Firebee is well recommended in Vietnam, several hundred of these drones were built.
In 1999, the company was absorbed by Northrop Grumman and became its business unit.

RQ-4 is made according to the normal aerodynamic design with a low-lying wing of high elongation. The wing, produced by the Boeing concern, is completely made of carbon-based composite material. 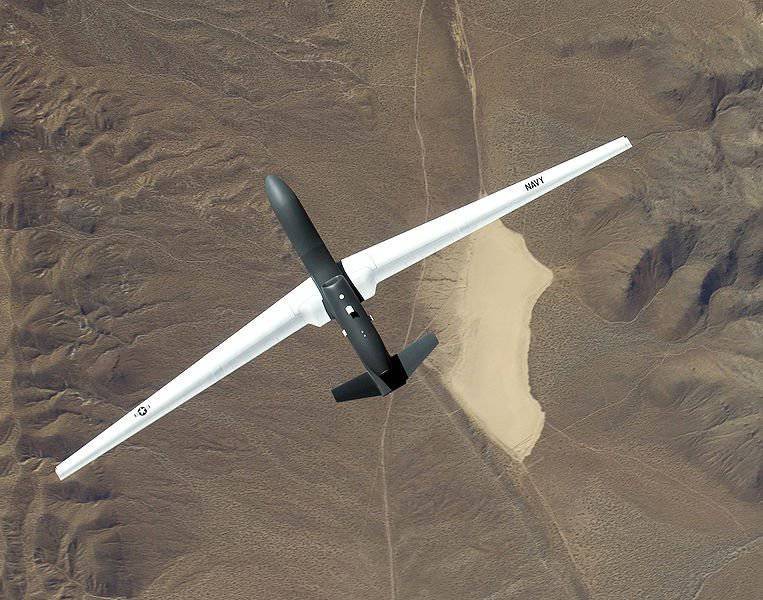 This made it possible to create a thin, light and strong wing of high elongation. There are at least two external suspension points on the wing, designed for loads weighing up to 450 kg each. Chassis three-point with a nose wheel. There is one wheel on the nose landing gear, and two wheels on the underwing stands. The semi-monocoque fuselage is manufactured by Teledyne Ryan from aluminum alloys. It consists of three main parts. The instrument compartment is located at the front. There, under a large radiotransparent radome there is a satellite dish parabolic antenna with a diameter of 1.22 meter. All intelligence equipment is located in the same compartment. In the middle part there is a large fuel tank and in the tail section there is a Allison AE 3007H jet turbofan engine. The engine was borrowed, almost unchanged, from business class Citation-X and EMB-145 aircraft. After making small changes to the control system, the engine runs steadily at altitudes up to 21 300 meters.
The V-tail, manufactured by Aurora Flight Sciences, is also made from composite materials. The wingspan is about 35 meters, length - 13,3 meters, and take-off weight approaches 15 tons. The unit can patrol for 30 hours at altitudes up to 18000 meters.
According to the estimates of the Northrop Grumman developer company, Global Hawk can cover the distance from Sigonella to the Johannesburg and back at one refueling station.

For the first time, the Global Hawk flew 28 February 1998 of the year, from Edwards Air Force Base.
In the first flight, the height of 9750 meters was reached, at a speed of 280 km / h. Thanks to the use of a differential GPS navigation system, the deviation from the runway axis after landing turned out to be less than the 0,5 meter. 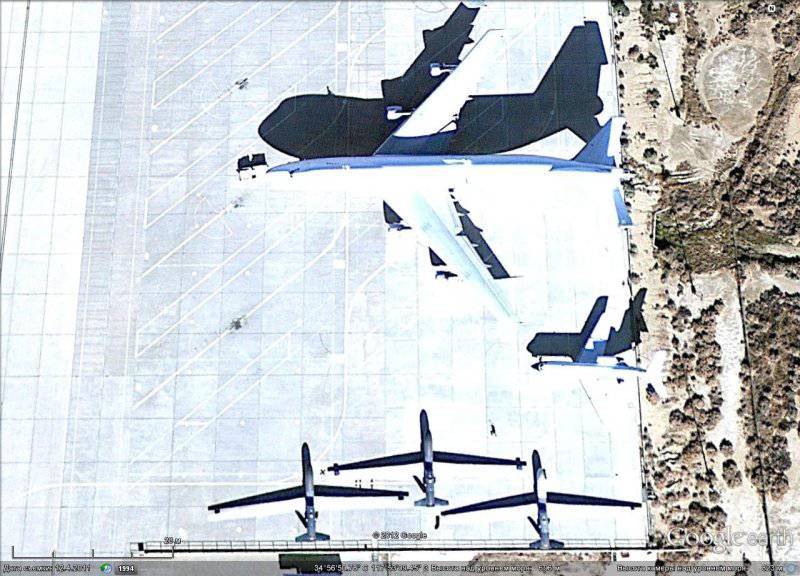 The first 7 built devices were created in the framework of the program "Demonstrations of advanced technologies" (ACTD), and were intended to assess the ability to perform special tasks. The world situation provided a high demand for this UAV, and the first prototypes were immediately sent to Afghanistan.

Production of the RQ-4 Global Hawk was carried out in parallel with the ongoing development. It was made nine BLA 10 Block (sometimes called the model RQ-4A), two of which immediately acquired the United States Navy. Three vehicles sent to Iraq. The latest UAVs of the first production modification of the 10 unit were received in 26 June 2006 of the year.
Further, in the framework of the model RQ-4В appeared:
Block 20 - its payload and wing span are increased (to 39,8 m), the flight range has been reduced to 8700 nautical miles.
Block 30 is a modified version, officially adopted by the US Air Force in August 2011.
Block 40 - made the first flight of 16 on November 2009 of the year. The main difference from the previous modifications of Block 20 / 30 is the multiplatform radar MP-RTIP.
The cost of one machine is about 35 million. $ (Together with the development, the cost reaches 123.2 million. $). To date, about 40 drone collected all modifications. 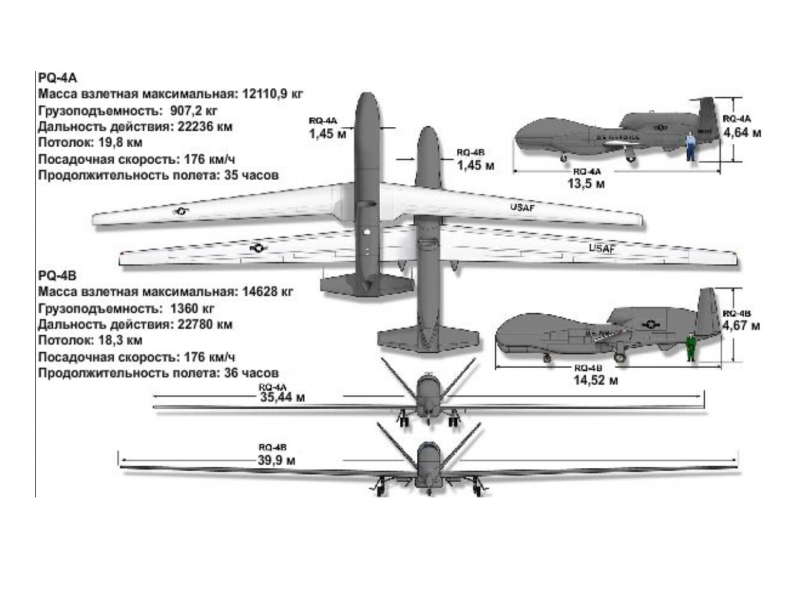 UAV is used as a platform for various reconnaissance equipment. Three subsystems of intelligence equipment are installed on Global Hawk. They operate at different wavelengths, can work simultaneously.
Radar with synthetic aperture manufactured by Raytheon, it is designed to work in all weather conditions. In normal mode, it provides a radar image of the terrain with a resolution of 1 meter. During the day, an image can be obtained from the area 138,000 km2 at a distance of 200 km. In point mode, a region of 2 x 2 km size can be captured over 24 hours in 1900 hours with 0,3 resolution. Using the Doppler effect, a radar can accompany a moving target if its speed is over 7 km / h.
Two radar antennas (located on the sides in the lower part of the instrument compartment of the fuselage, length 1.21 m). Electronic equipment weighing 290 kg consume 6 kW of electricity.

The daytime electro-optical digital camera is manufactured by Hughes and provides high-resolution images. The sensor (1024 x 1,024 pixel) is associated with a telephoto lens with a focal length of 1750 mm. Depending on the program there are two modes of operation. The first is scanning a bandwidth of 10 km. The second is a detailed depiction of the 2 area x 2 km. To obtain night images, an IR sensor is used (640 x 480 pixel). He uses the same telephoto lens. The lens can rotate at an angle of 80 degrees. 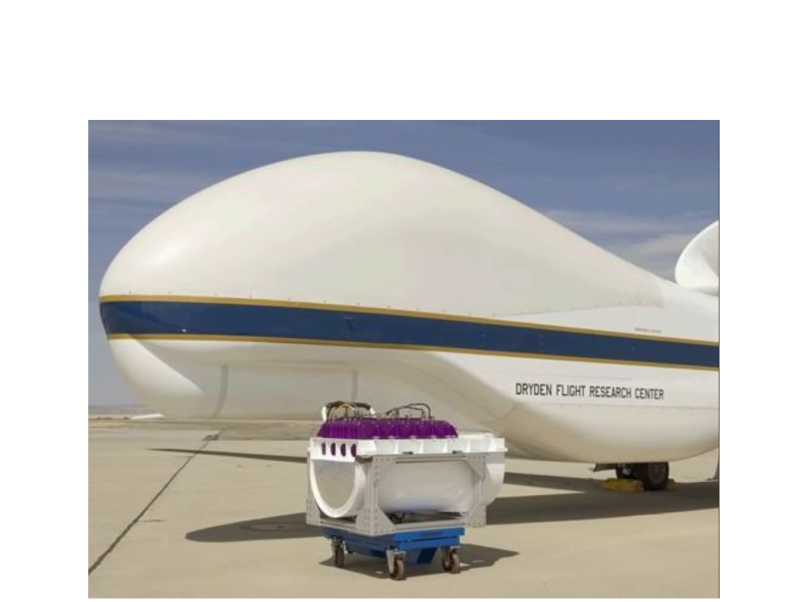 Radar, day and infrared cameras can work simultaneously, which allows to obtain a large amount of information. The combined day / night infrared camera has the speed of information output - 40 million pixels per second, which is depending on the color resolution 400 Mbps. The on-board data acquisition and storage system compresses the resulting digital images and records them.

Global Hawk is integrated into existing tactical aerial reconnaissance systems (flight planning, data processing, operation and information dissemination). It is connected to the systems: the Integrated Intelligence Support System (JDISS) and the Global Command and Control System (GCCS). The resulting images can be transferred to the operational commander for immediate use. The data obtained from the UAV are used for target detection, for planning shock operations for reconnaissance, and also for solving other tasks.
UAV without the use of stealth technology should have a sufficiently high survival rate. To ensure this, Global Hawk is equipped with a radiation detector with AN / ALR 89 RWR radars and jamming stations. If necessary, he can use the towed jammer ALE-50. Experiments on the simulation of real situations have shown that Global Hawk can, on average, make more than 200 sorties if the flight route is planned taking into account the current situation (outside active combat zones).

The ground segment of the Global Hawk system includes a job control block and launch and maintenance elements produced by Raytheon. The task control block serves for the planning, control, processing and transmission of images. The launch and maintenance system provides accurate differential correction of the global satellite positioning system for accurate take-off and landing, while in-flight GPS is used with an inertial navigation system. Due to the separation of the elements of the ground station, each part of it can be located in a different point of the world. The task control block is often located along with the main control point. Both elements are placed in a military container together with an internal antenna for direct communication and satellite communications equipment. 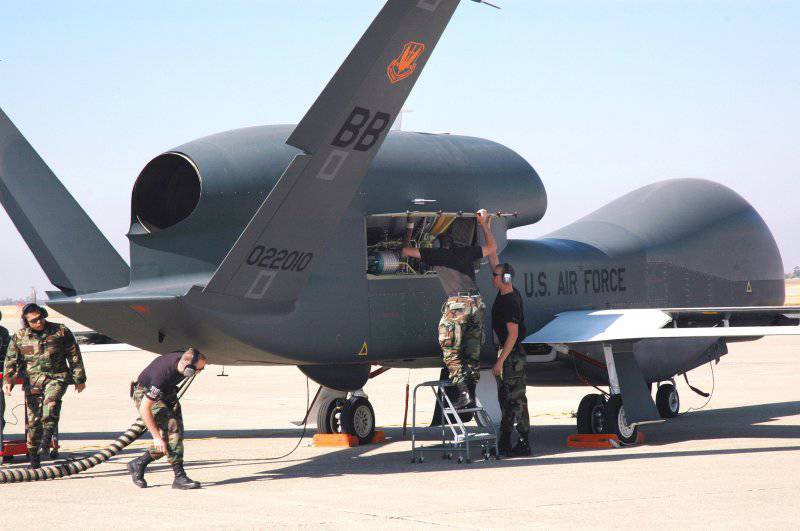 UAVs RQ-4 Global Hawk were used during combat operations in Afghanistan, Iraq and Libya. Most likely they will be applied during the operation against Syria.
Infrastructure is being equipped and equipment is being installed to use Global Hawk’s strategic high-altitude reconnaissance RQ-4 in different parts of the world. 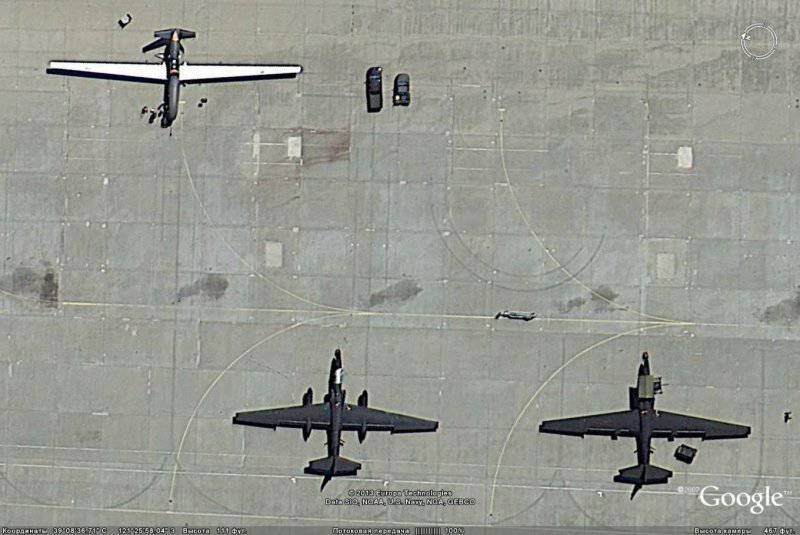 Google Earth satellite image: Global Hawk and U-2 reconnaissance aircraft at Baele airbase
At the first stage, the task is set, on their effective use in Europe, the Middle East and North Africa. For this purpose, it is planned to use the US Air Force base on the island of Sicily, on the territory of the Italian WWF Sigonella.
The choice of the Global Hawk type RQ-4 UAV as the primary means of conducting aerial reconnaissance and surveillance, including in the zone of Europe and Africa, is by no means accidental. At present, this drone with a wingspan reaching 39,9 m can be called, without exaggeration, the actual uncrowned “king of UAVs”. The device has a takeoff weight of about 14,5 tons and carries a payload of more than 1300 kilograms. He is able to stay in the air without landing and refueling up to 36 hours, while maintaining a speed of about 570 kilometers per hour. BLA ferry range exceeds 22 thousands of kilometers. 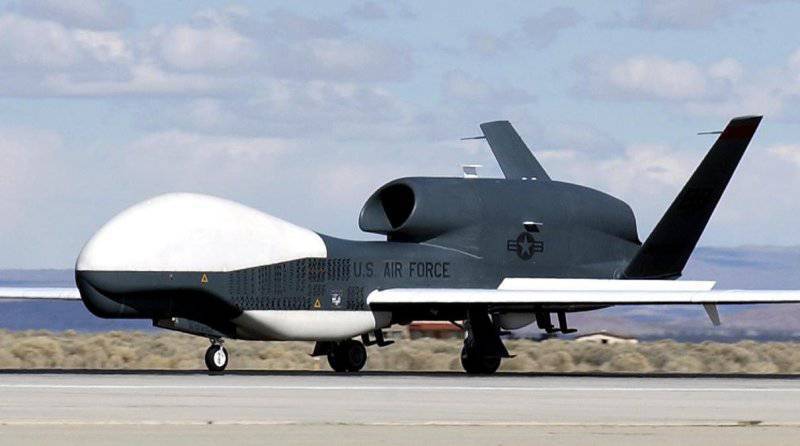 In addition to military intelligence tasks, the RQ-4 Global Hawk is actively used for environmental monitoring for scientific purposes.
Several machines are used by NASA at the Dreyden Science Center for high-altitude research flights. UAVs were used to measure the ozone layer and transfer pollution through the world's oceans. 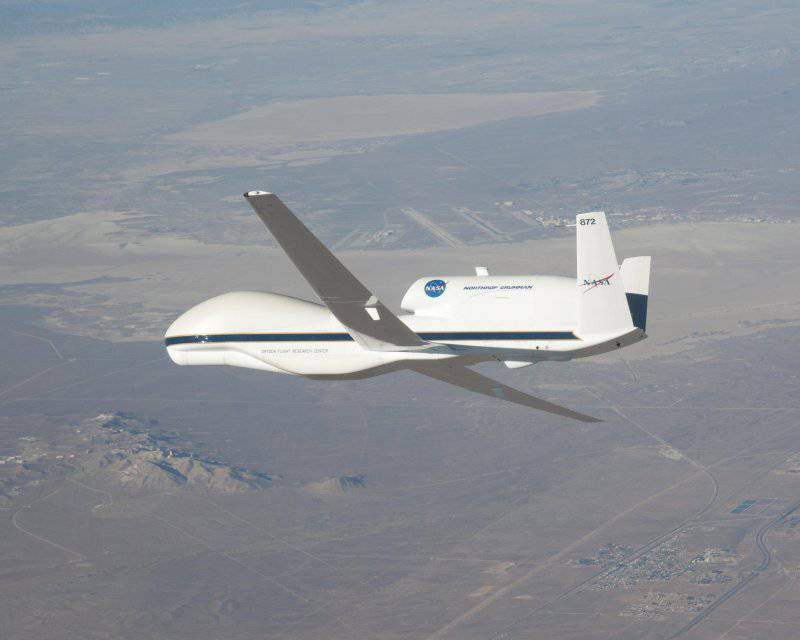 In August, September, 2010, one of the devices participated in the NASA Genesis and Rapid Intensification Program (NASA), in the framework of studies of the Atlantic basin for the occurrence of hurricanes. It was equipped with weather sensors, including radar in the Ku-band, lightning imaging sensor and cameras from which the parachute radiosonde is emitted.
The drones could be used to research the Antarctic when they were based and working in Chile.

In the aftermath of natural disasters, flights were made over the territory of the United States to assess the damage caused by Hurricane Ike and the California fires. 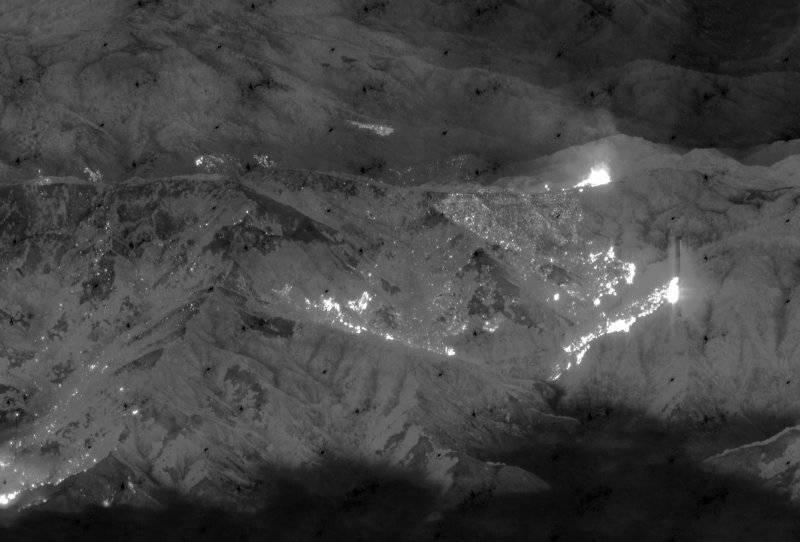 A photograph of the fires taken by the Global Hawk of the US Navy in Northern California, 2008 year.

Interest in acquiring Global Hawk was expressed by some US allies.
Germany to replace the outdated patrol aircraft Breguet Atlantic chose the RQ-4B, dubbing it Euro Hawk. The car retained the original glider, but received the EADS reconnaissance equipment. The sensor package includes 6 wing hangers. 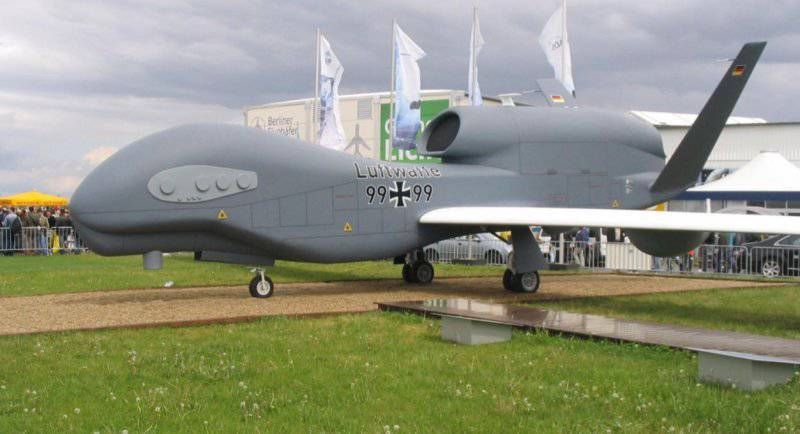 EuroHawk officially entered the service on October 8 on 2009, and 29 took the first flight on June 2010. He underwent flight tests at Edwards airbase for several months before he began flying in Germany in May 2011. Initially, he entered WTD61, Ingolstadt Manching Airport.
The cost of the first 5 machines amounted to 430 million euros for development and the same amount for the purchase.

Canada plans to replace CP-140 Aurora patrol aircraft for maritime and ground surveillance. For work in the Arctic, in conditions of extremely low temperatures, specialists of Northrop Grumman created a modification of Polar Hawk.

In addition, supply negotiations are underway with Australia, Spain and Japan. India is also a potential buyer.