Three days to hold out. Syria’s air defense system may well resist a US attack - under certain conditions 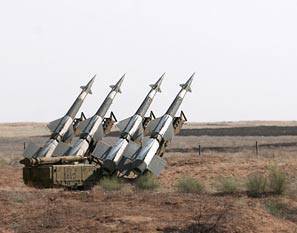 The effectiveness of the Syrian air defense is one of the main issues in connection with the expected attack on Syria. On closer examination, it turns out that, despite the abundance of outdated systems, Syria still has chances to put up quite significant resistance. And in general, it is clear what needs to be done for this.


The distribution of goals is always a mutual game ahead of the curve. The attacking side is simply obliged to destroy the defense in the very first hours and “clear the sky”. Conversely, the defenders will seek to avoid these losses and destroy the means of attack in order to deplete enemy resources. The first goals of the Tomahawks will be the most capable Syrian air defense systems, which, in turn, are a tool for the maximum destruction of cruise missiles.

Syria's air defense system will be forced to solve two parallel tasks. The first is a reflection of the primary rocket attack. The second is the traditional protection of airspace on a territorial basis.

Now Syria's air defense system is about as organized. For the most part, it consists of the long-obsolete Soviet medium-range C-125 "Neva", C-125 "Pechora", "Cube" (up to 200 units), "Wasp" (14 batteries, that is, up to 60 combat vehicles). It is assumed that they are in service with the up-to-date 50 C-13 Carapace, but, most likely, only part of them managed to be put on duty. This whole pile of metal, counting the 100-mm KS-19 cannons found in long-term storage and almost 2500 Shilok and 35 Strel assigned to ground forces, covers the “full-time combat schedule” in the old manner.

It must be understood that the Syrian command is a very clever man. The strategic system only seems outdated because it was built in the old fashioned way to ensure a large-scale land war. Potential adversaries (Israel and Turkey) have incomparably greater power aviation. Why do Syria need to still contain 150 MiG-21s - science does not know. But there are no guarantees that the 48 MiG-29s will be able to take off. The same applies to 50 combat-ready MiG-23s and 30 MiG-25 interceptors. According to various estimates, the density of fighter aircraft cover can be a maximum of 5%. This is also a lot, but that is precisely why in the last 10 years consciously special attention was paid precisely to the development of the strategic air defense system.

But this system has been honed for years under the war with Israel. Therefore, now it is dominated by outdated, but very numerous medium-range systems. There are a lot of them, and this is good. They were supposed to create the maximum density of defeat from the south-western direction at medium altitudes, covering the ground forces from the assault strike. Now they urgently have to relearn.

First of all, it will be necessary to retrain now for another parameter of goals. There was a lot of noise about the effectiveness of the Syrian air defense after the downed Turkish "Phantom". In one such case, it is impossible to judge the whole system, but it was he who seriously cooled Ankara. After all, the task of the flight was in identifying new detection systems located not along the Turkish border, but along the sea, and the destruction of the aircraft was the only sensible solution for Syria’s air defense — otherwise it would have brought all the parameters of the new radar system on itself.

Now it is necessary to revise the radar settings, since the situation in the theater of operations will be fundamentally different. In the first 48 hours, the enemy will massively use small targets, from “Tomahawks” and guided bombs to hundreds of distracting targets. And the main blow in the first minutes will have to not on the air defense system itself, but on detection and control systems.

The weakest point of the Syrian air defense is to the death of an outdated command and control system. It is entirely copied from the Soviet, which implies a rigid vertical structure. If the chain of orders somewhere along the road breaks - everything stops.

However, in the last year, the rigidity of the system changed simply under the pressure of circumstances. Two general air defense commands were created (North and South), then control points of units and subdivisions that use shortwave and even wire communication systems in the old manner. But today, three fully computerized command posts of Russian production have been commissioned. Even before the beginning of the air battle, they can make decisions on targets, organize military operations and exchange operational-tactical information. God knows that the ideology of control of the melee system, for example, is hopelessly outdated, but the new controls have one unconditional advantage: they do not depend on orders from Damascus. The effect of "reasonable decentralization", when the inferiority of the old system of command was compensated by new technologies, turned out. # {Weapon}

But still, much of the detection systems remained at the level of the Arab-Israeli wars 50-year-old. For example, the Kvadrat SAM system is still manually guided. That is, a person is sitting behind the screen of the Crab 1960 complex of the production year (the screen, not a person), and is tracking large targets with the eyes of 10. At the same time, he presses the buttons and screams with his voice, because the antennas of the same year of production are not induced, they must be pushed. A well-trained crew can handle seconds in 30 with a radio link distance up to 15 kilometers. Everything. Sailed. Funnel one will remain.

Automated control systems were to be supplied to Syria only in a set with the air defense systems of another generation. But such a thing as a tablet computer, the Syrian army is unknown. Therefore, the effectiveness of modern Russian radar stations in Syria will not really help the effectiveness of hitting air targets - the provision of air defense systems with automated processing of the information received is late. Deliveries of equipment were not in the complete set of software, but in parts. What President Putin had in mind when he said that “Russia has suspended deliveries of equipment to Syria.”

In fact, Syria has only two truly modern radars. Firstly, it is absolutely Russian radar, served by absolutely Russian people on Mount Jebel al-Harrah near Damascus. And similar, but with local staff on Mount Sanin. They are imprisoned on Israel and the Mediterranean Sea and are associated with the most modern and effective air defense systems: those same C-300 and C-200. Even the old C-200 provides interception of targets at a distance of up to 150 kilometers from the coast and completely closes the ports of Tartus and Lattakia. Any target is intercepted at a range of 100 kilometers from major cities even when launched from Turkey.

However, we must understand that "Tomahawk" - a dull rocket. To launch it, the duty officer of the destroyer from the ship’s fire control center must request from the satellite (and this other room is the communications center, where you still need to go and be allowed to enter, not all ship staff officers have the right to enter the communications center) in the United States. Including the management of cartography, since only it has the necessary data to be loaded into the guidance system. The request pulls for two to three minutes and goes along the open line. To read this fascinating correspondence in the Eastern Mediterranean is already the Russian ship "Azov". Further, the low speed of flight in the mountain zone (“Tomahawk” simply follows the terrain, which means it must carefully maneuver between obstacles) will make it possible to look at it, no more protected than the FAA-1 in 1944. At least from a machine gun shoot.

It follows a logical conclusion. The most effective mobile air defense systems of Syria (C-300) should be transferred to permanent duty outside the usual guard zone. In other words, they move northeast from Damascus, where they cannot be reached, and are removed from the operational command. It turns out "elusive Joe" with a radius of destruction up to Cyprus to the east and to Eilat to the south.

The weakness of this idea is that between stable strategic defense zones (North and South) there is a failure in the integral zone of destruction at low and extremely low altitudes. There remain several C-200 batteries, but most likely they will die first, since their location has long been known. Keeping there in a hidden reserve (that is, moving in a circle) C-300 and "Buki" is a controversial idea. Anyway, the coating at the ultra-low height will be no more than 15%, with which you will have to accept.

Is the same история while repelling a blow from Turkey at extremely low altitude. Three C-200 divisions, the same number of C-75 and two C-125 can survive only by roaming. Moreover, their radio-electronic systems are completely defenseless against active interference. There is also the ar-Rakan direction (north), al-Hasan (northeast), Daur-az-Zaur, which in this situation turn out to be completely uncovered. The only reasonable salvation is the creation of mobile brigades from the remnants of "Bukov" and "Pantsirey." At the worst, MANPADS and anti-aircraft guns.

In general, the entire “self-defense system” —the air defense of the ground forces, up to the Strel — must work for itself upon the appearance of targets. Do not listen to orders from Damascus, if such even begin to come. And local radars should be turned on for more than 20 seconds only to support the target.

Technically, Syria’s air defenses have a 15 – 20-multiple advantage in front of the attacker in the area of ​​four major cities. Umbrella tightly closes Damascus, Aleppo, Ham and Idlib. Homs is no longer a city, but a pile of concrete, there is nothing to protect there. Hence, the most promising task will be the removal of the damage radius by more than 100 kilometers into the Mediterranean Sea and deep into Turkey. At the same time, the eastern border with Iraq will remain a completely failed section, from where bombers from Bahrain and Nimitz will surely fly.

There are still purely domestic problems associated with the training (or lack of education) of staff. In the absence of a computer distribution of goals, the smartest one should agree with the next calculation on the area of ​​responsibility. Otherwise, 40 missiles will fly into one "Tomkat", and all the rest will be bombed safely. It is necessary to create a mixed air defense batteries for different heights of destruction. That is, the space in height must be closed by various systems so that they also do not “select” targets from each other. Need a false fire system. Let the old "Urals" with wooden rockets ride in a circle. Very effective. The fire must be fought only for small targets to the maximum depth of destruction and systems of different types. Simply put: I saw - I shot, and then I thought why and what it was. The radar field overlap is two to three times radar. Otherwise, save yourself. Old radar set at a distance of 300 meters from the air defense system. Damaged - used as a false target. Cables - bury at least half a meter, do not be lazy. Personnel to drive into the trenches and make to kindle fires at night - you will laugh, but the American missiles with thermal observation still perceive them as a point of guidance.

All this can withstand these critical three or four days, after which the carrier groups will run out of ammunition. And there already - only God knows.

Ctrl Enter
Noticed oshЫbku Highlight text and press. Ctrl + Enter
We are
What you didn't want to know about EnglandMilitary reform as an integral part of the security concept of the Russian Federation: Systematic dynamic assessment
Military Reviewin Yandex News
Military Reviewin Google News
236 comments
Information
Dear reader, to leave comments on the publication, you must to register.