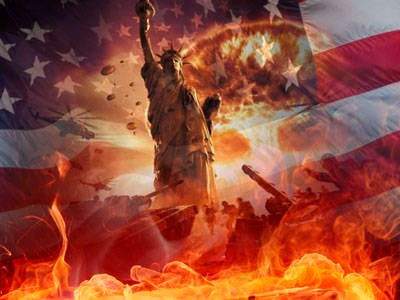 In the 1938 year, England and France themselves pushed Hitler into war, allowing him to occupy Czechoslovakia and sanctioning the Anschluss of Austria. But then the brown plague could be stopped. If London and Paris were more determined, Europe would not have lay in 7 years in ruins and there were no 70 millions lost. On the European ashes a new global empire has grown - the USA. North America received a huge financial income from both the Second World War and the post-war reconstruction of Europe and was able to fully recover from the consequences of the Great Depression.


Now we are in the initial phase of the global crisis, which can last for ten years, and is similar, and perhaps even more severe than the depression that has befallen the world in the 20-30 years of the last century. But now the United States is preparing to overcome the crisis. The United States simultaneously creates conditions for both the re-industrialization process, the restoration of the full technological cycle of North American industry, and the emergence of an enemy with whom, after the crisis, could unleash a new world war that could give the United States even more 100 years of sustained economic development.

Over the past 10 years, Americans have made a significant step in the development of their fuel and energy complex, which influenced the change in US policy in the Middle East. If 10 years ago, the White House, while conducting military interventions, pursued the goal of controlling the level of oil prices that was comfortable for itself, now the US is interested only in one thing - to increase the difference in quotations between Brent oil traded in Europe and WTI listed on North American market. The US favors the growth of Brent quotes, as it allows for Europe and Asia to reduce production costs in America without reducing the cost of labor.

With the change of goals, the policy has changed. America does not seek to create in the Arab world controlled regimes whose task would be to ensure uninterrupted supply of oil and gas. Now the US is leaving behind the chaos of civil war, death and destruction.

The United States set fire to the entire Middle East and North Africa - Brent crude quotes remain at a level above $ 110 per barrel, production in Europe and China is declining. However, if we look at the countries where the so-called Arab Spring has recently swept through, we will see that secular nationalist regimes have formed in all these countries.

Despite European-specific conditions, the development of nation states in the Middle East and North Africa is similar to the development of nation states in Europe from the end of the 19 century to the beginning of World War II. After the collapse of the continental empires, caused by the consequences of the First World War, nationalist states were formed in Europe. Many of them respected the rights of national minorities and religious denominations. Approximately the same situation was in Libya and in Egypt and is still preserved in Syria. By the way, Iran, one might say, goes the way of Spain during the reign of General Franco.

The strengthening of national states inevitably leads to the formation of an elite that is vitally and financially interested in preserving and enriching its national state. And even if members of the elite were nourished by foreign states, these elites themselves begin to defend national interests, often at odds with the interests of former sponsors.

For Iran, Syria, Egypt and Libya, the European market is the only one where oil and gas can be supplied with low transportation costs. What Europe means lower energy price. But this goes against the US plans for new industrialization. It is no coincidence that unrest in Syria began right after agreements were reached between Syria, Iran and Iraq to lay a gas pipeline along which Iranian gas destined for Europe was to be supplied to Syrian LNG terminals.

In the 30s of the last century in Europe, not without the influence of Nazi Germany and fascist Italy, with the tacit connivance of France and Great Britain, the elites of the new national states leveled democratic institutions in a short time by establishing pro-Nazi or pro-fascist regimes. Gradually began the persecution of national and religious minorities. Such organizations as the Muslim Brotherhood, professing radical forms of Islam, can be attributed, according to the European tradition, to religious pro-fascist organizations. The Muslim Brotherhood, which is trying to establish radical religious regimes in the Arab world, is sponsored by the closest US allies Qatar, Jordan and Saudi Arabia - countries, to put it mildly, no different than democracy or religious tolerance. Against this background, Iran can be called a state making tremendous progress in democratization and in the development of secular society.

After the chaos sown by the USA in the Middle East, radical religious regimes can be formed in the Arab world, which will be united into one huge caliphate. Like the Third Reich, this caliphate will have close ties with the US financial world. As in the case of Nazi Germany, many North American bankers and industrialists are interested in creating such a caliphate.

While the American economy is emerging from the crisis and a new robotic industry is developing in the United States, a religious extremist caliphate will be able to accumulate enough weapons to wage a full-scale war. At the same time, in Europe, being in a deep crisis, a socio-political situation will arise, in which the emergence of a new authoritarian empire is possible. In this case, the role of outsiders, on which it will be possible to write off all the evils, and, above all, expensive oil, will be performed by Muslims or Arabs. World war will become inevitable. The reason, perhaps, will be a terrorist act in Europe, which will be a retaliatory step for the deportation of Muslims or the organization of concentration camps for Arab terrorists.

The Third World War will bring destruction on such a colossal scale that the United States will be able to develop more systematically over 100 years without social upheavals on its territory. Not to mention the profits that Americans are planning to get from the war itself.

In this regard, it is clear the reluctance of Europe and the main ally of the United States of Great Britain to get involved in a war with Syria. NATO also decided to step back from the Syrian adventure. But, in principle, the US rejection of the alliance is only on hand. In the NATO scenario described above, the Americans do not need it, for they will try to wage a third world war with someone else’s hands, joining it at the last stage, as it was during the first and second World Wars. The North Atlantic bloc may prematurely, and, quite possibly, not on the right side, draw the Americans into the slaughter. Most likely, NATO is waiting for the fate of the United Nations, with which the United States has long been reckoned with and uses it as a tool to promote only its own interests.

Never before have the interests of the USA and Europe been so opposite than they are now. However, as in the 30 of the 20 of the twentieth century, France and Great Britain were more frightened by the communist threat of the Chimera than by the obvious facts of Hitler’s preparation for war, now Europe prefers to see the threat in Russia rather than admit the obvious fact that the United States has ceased to be a guarantor of European security and become a force pushing Europe and the world towards a third world war.

Ctrl Enter
Noticed oshЫbku Highlight text and press. Ctrl + Enter
We are
The world we leave, the world we enter, and the world between them"Not everything was bad under Hitler": the stunning results of a public opinion poll on the 75th anniversary of the Anschluss of Austria
Military Reviewin Yandex News
Military Reviewin Google News
61 comment
Information
Dear reader, to leave comments on the publication, you must to register.