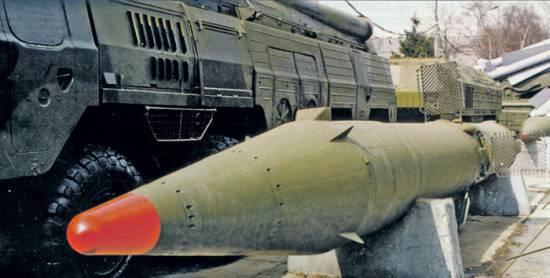 The mobile rocket complex Temp-S can now be seen only in the museum.

Suddenly, the discussion on the Treaty on Intermediate-Range and Shorter-Range Missiles (INF) and the need for the Russian presence in it is gaining momentum. Unfortunately, for the time being, all this is opportunistic in nature, being presented as a kind of “our answer”, a bargaining item for exchanges, and counter proposals for Barack Obama’s calls for further reductions in missile weapons, both strategic and non-strategic. And even the most sophisticated specialists, alas, all the time, in the course of their analysis, fall into the usual rut of examining this problem in the context of the former bipolar Soviet-American confrontation during the Cold War.

The DSRMD is by no means the worst product of that era, it objectively worked to strengthen security and trust. But is it relevant today? Moreover, it is practically regulating a whole class of nuclear-missile weapons, which became widespread in the modern world, only for the Russian Federation and the United States, giving everyone else complete freedom. We agree with those who believe: the relations of the Russian Federation and the USA / West have undergone major changes compared with the times of the Cold War. Although the tasks of mutual deterrence as a kind of insurance, not only, we note, for the Russian Federation are still significant. At the same time, speculation about the “complete devaluation” and “uselessness” of the Russian nuclear missile potential in connection with the West’s expected creation of a multi-tier, integrated missile defense system, in our opinion, is provocative. But in any case, our relations should not be aggravated, for example, by an additional cluster of medium and shorter range missiles (RVMD). But what does the INF? If a new crisis suddenly comes in our relations, it is not because of the contract or because of its absence. But even if we consider the “western frontier” of Russia to be reliable and stable (we do not specifically add - friendly), one can’t say with the same confidence about other areas of the Russian Federation’s extensive security perimeter. And here, in our opinion, the possibilities for the effective use of the MISMD as a tool of deterrence may turn out to be significantly different.

Generally speaking, the meaning of owning an SSMD for the USA and the USSR / Russia was always different. The United States, in principle, could well dispense with the RSOM due to its geographic location. But this is not counting the tasks of ensuring umbrella security of partners and allies, projection of power, including in relation to the USSR. The USSR / Russia has a completely different situation, radically different from that of the USA, “continental” geography and geostrategy. But if during the times of the USSR, the southern and partly eastern frontiers were still reliably blocked and did not require reinforcement in the form of an SRMD, today such an increase is politically and almost inevitable. In general, it is surprising that the Russian Federation has not yet raised the question of withdrawing from the DDSAM, apparently due to inertia, faith in the “good old order”, in the Magic of the Great Treaties. And the fact that today it is time to review the past (and from the past) state of affairs, more than naturally, reasonably, in a timely manner. And not to “stab” America. For the Russian Federation, this “outcome” would be a step that fully meets the national interests of the country at the present stage and for the foreseeable future, the tasks of ensuring its national security.

At present, perhaps, RVMMD could be no less, if not more important, than a number of other large-scale, prestigious, costly spheres of military construction in Russia, to reliably ensure the security of the Russian Federation from certain directions. And it will not be just a waste of manpower and resources. Threats and challenges are not only purely military-force, in the “arc” south-southeast-east, diverse and numerous. There is not and cannot be a single, unified prescription for deterrence. And RVMD is objectively one of its most important tools. Moreover, the range of possible use of RVMD on these lines is very wide. From the actual implementation of strategic deterrence to solving problems of a different nature, in various equipment, in the course of the integrated security of the Russian Federation, with the implementation of RVMD in conflict scenarios of various types and levels, including the implementation of preventive measures. And in some cases, the role of RVSMD can be very significant, even decisive. And far from being replaced by other forces and means, including in their “shortened”, “facilitated”, modified version.

On the marked azimuths in the underbelly of the Russian Federation, in its surroundings and in close proximity to its vast and not too protected, rarefied spaces, there are significant countries claiming to have global and at least regional influence. At the same time, a number of them are actively developing their own missile weapons, including RVSMD. For example, the same "Carthage". Although not all boils down to quantitative balances and sub-balances, the preparation of which involved in the first place. Russian RVMDs, if they appear, will be called upon to restrain, among other tasks, missile weapons of other participants of the geopolitical equation. But not only, not at all. The “special role” of the RSMD factor in the implementation of deterrence, direct and indirect, military and non-military expansion in the southern, southeastern and eastern directions is due to the fact that this deterrence will inevitably have a pronounced asymmetrical character. This is also because the Russian general-purpose forces (CPF), despite significant financial commitments made by the state, most likely have not reached the optimum level of readiness. Well, given the length of the Russian perimeter of security, the construction of the country's defense should not turn into a remake of The Tale of the Golden Cockerel by the great geopolitics of Alexander Pushkin.

Of course, this does not mean at all that the creation of the now-new RVSMD class for the Russian Federation is easy and that we will be able to produce them, according to Khrushchev, “like sausages”. But here is one of the conclusions of the recent teachings in the east of the country, about which they do not want to speak out loud, in order “not to anger the skies”. The most realistic (compared to others) possibility of providing deterrence in the event of a large-scale conflict in this direction is not the movement of troop masses along a single track and not building up a network of points for jumping, receiving, gathering at a reliable crosshair. Namely, missile weapons, including, if not primarily, RVMD. In the end, on the geostrategic, like on the football, field “the ball flies” is always faster than the hustle and bustle of the players. In assessing the effectiveness of the possible use of the deterrent potential of Russian (possible) RVSMD in the foreseeable future, it is absolutely necessary to take into account the missile defense factor. However, he is likely to play at these frontiers a sensitive role in assessing strategic balances of deterrence, comparable to the US-NATO in the western direction, not tomorrow and not the day after.

Will the withdrawal of the Russian Federation from the INF Treaty be an additional incentive for the nuclear missile arms race in the world? Will it affect the security of Russia itself dramatically? Surely not even a pretext, everyone who works in this direction, has long been engaged in "his own business." What really stimulates the nuclear-missile and strategic armaments race (RNSF) is a dramatic complication of the international situation, an increase in instability and uncertainty, not the fault of Russia. For that matter, much more progress in this regard is made by the missile defense factor rather destructive than stabilizing. As for the security of the RF itself, only naive idealists or hard-nosed demagogues believe that we live in a contrasting world of "good and evil." Unfortunately, in the system of "many evils" sometimes it is necessary to choose the smaller of them. And for the security of the Russian Federation in a certain time interval, the possession of the RVSMD potential can become just this “lesser evil” compared to its absence.

We emphasize that a possible withdrawal of the Russian Federation from the INF Treaty should be considered in no way in the development of confrontation between the Russian Federation and the United States. And just such a point of view today is actively and openly imposed, pedaling some domestic and American political scientists, politicians, and military, by the way, not only “hawks”, but also “pigeons”, each for his own intimate reasons. So, we repeat, this is not the case when “in spite of the American grandmother you need to freeze Russian ears”. It is the leadership of the national interests of the country to ensure its reliable, economical, non-provocative defense dictates for the Russian Federation the practical possibility of such a step.

And the last. Improving a country's security system is a continuous and continuous process in time and space. There is not and can not be anything "untouchable", the truth is born - as heresy and dies - as a prejudice, the wise men taught, and as Charles de Gaulle said, each construction has its own balance. In contrast to the times of the Cold War, today there are no truths and doctrinal constants frozen for decades. And it's not about lightness, shallowness of judgment or inconsistency, fragmentation of politics (although this is enough today) - first of all, this is our fast, too fast era. The United States simply understood this before Russia, in some situations clinging to convenient stencils. And the Russian side should not dramatize possible — and inevitable — transformations of the world, including assessing the prospects for Russian-American relations.

Let's admit: the Russian Federation still has a rather limited set of forces and means for carrying out security activities. And in these conditions, in fact, to impose upon oneself some kind of “religious self-restraint” in the form of abandoning the potential of the RVMD is obviously to deprive oneself of the possibilities of a more diversified and more effective policy.

Ctrl Enter
Noticed oshЫbku Highlight text and press. Ctrl + Enter
We are
Once again about medium-range missilesMilitary reform as an integral part of the security concept of the Russian Federation: Systematic dynamic assessment
Military Reviewin Yandex News
Military Reviewin Google News
29 comments
Information
Dear reader, to leave comments on the publication, you must to register.