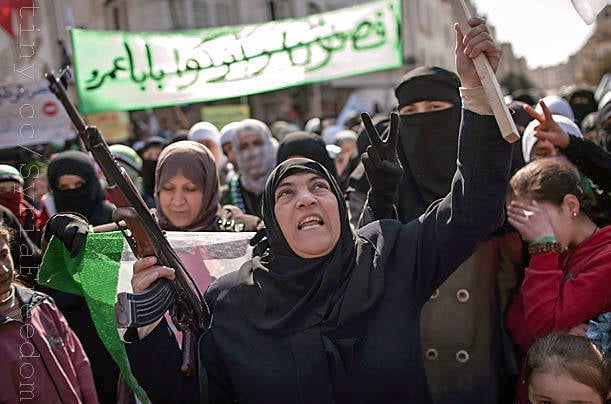 
Russia enthusiastically continues to bet on the infernal betting - whether Obama will order a strike on Syria or postpone it again to "clarify the details." And if it does, will it be full-scale, or will it turn out to be really “limited” or even conditional?

But there is in all this stories extremely unpleasant moment for us. Republican McCain could not even speak so frankly that Russia, they say, is next in line for “humanitarian aid” from American “partners.” It is enough just to look at the map and at least superficially analyze all the oral and written statements of the Western establishment to understand: we seem to be really on the line, and the fact that someone else probably took us is comfortingly frankly weak.

Aspiring in the 90's and zero years, the Caucasian separatists showed themselves in the way that those whom the authorities chose not to recall at all should have shown themselves. They, of course, crave revenge, but, of course, rely in their fantasies on the powerful rear in the face of the United States, which, in turn, have nothing against their free assistants.

Already in June, the head of the FSB of Russia, Vladimir Bortnikov, sounded the alarm bell: “About 200 immigrants from the Russian Federation are fighting on the side of terrorists in Syria. The danger of this action is that ultimately these terrorists will return to the countries from which they traveled. ” But why was this said? To the state did not decide at least seriously understand the very nature of this phenomenon? And in a good way, it would not be bad for Bortnikov himself to explain just how our valiant security officers had missed such an important point. Excuses can be given in response to myriad. Moreover, for sure, the already quick team of Bastrykin prepared the tactics for answering such uncomfortable questions. But, since the FSB has “woken up”, it’s much better to listen not to repentance, but to specific proposals, if you like - a plan to counter the threat of spreading unrest to the south of Russia (and even more so on the eve of the Sochi Olympics!).

Let Russia have no power over the madness of the American "hawks" and in response to their argument in favor of aggression, we can only plant hands, but to prevent the "remake" of Syria within our borders is the routine duty of our Federal Security Service. This is the image of a genuine, not a fake internal enemy, drew itself - our homegrown Wahhabis, whose aggression is multiplied by wounded pride and thirst for revenge. It’s time to get the filing cabinet from the dusty shelf, sit down at the agent’s materials previously obtained (here we proceed from the fact that all the sources for exposing and neutralizing the militants in the FSB’s arsenal are), prepare a plan to suppress provocations from our radicals ... I want to believe that, just stating the fact, as if completely cut off from the sphere of interests of the FSB, Mr. Bortnikov showed himself that he was waiting for someone to start to deal with it.

The threat of "new Syria" in Russia in an interview with a KM.RU columnist was evaluated by the vice-president of the Academy of Geopolitical Problems Konstantin Sokolov:

- In any case, quantitative characteristics are more visible to representatives of the FSB. Personally, I can’t imagine how many militants from Russia are fighting there, but I can well imagine that for the most part Russian mercenaries are from among those who come from the Caucasus, the ones from Ichkeria. This fact is well known. It is enough to get acquainted with the testimonies of Mikhail Leontyev or Marat Musin who visited Syria. There are photos of anti-Russian slogans written in Russian on the walls of Syrian houses. Mercenaries from Russia are the same fighters that our security officials are still fighting.

All reasonable and caring observers in Russia have an absolutely clear understanding that Syria is now the front line of our country's defense. Just so, this is not an exaggeration at all. It is enough to recall the very recent statement of the very famous American “hawk” John McCain, who, at the beginning of the well-known events in Libya, quite frankly said that after Libya there will be Syria, and after Syria - Russia. In this connection, we must clearly understand what is happening as the realization of the elements of a single plan. And the outflow there of a certain part of the militants from the Caucasus is a completely natural maneuver of the hostile Russian military forces.

- How likely is it that the mercenaries who have honed their skills from Russia will actually use them already in our country?

- This probability is directly equal to the probability that those who conceived to “democratize” Syria, and behind it Russia, will be able to fulfill it. And the only question is how to make such a scenario impossible, forcing the United States to abandon the idea of ​​a total world political reorganization, creating a new political map of the world, on which the United States alone will be. This map does not provide for the presence of national clans, national elites.

And in such conditions it is extremely important that all over the world local political and business elites fully realize the danger that their states may also be under the gun of Americans, that their current interests are to the detriment of the interests of the overwhelming majority of the world's population, and that it is a real, not ephemeral threat. If this idea reaches representatives of all countries, including those who are now acting as aggressors (and in fact are toys in the hands of the United States), then, I think, this plan will be foiled.

Ctrl Enter
Noticed oshЫbku Highlight text and press. Ctrl + Enter
We are
A great interview with Sergey Lavrov: about Ukraine, Obama and IranWhat you didn't want to know about England
98 comments
Information
Dear reader, to leave comments on the publication, you must to register.