6 September 2013
10
In mid-August, the United States adopted the most important document determining the development strategy of the American naval forces for the next five years. The chief of staff of the US Navy, Admiral J. Greenert, signed a document entitled “Naval Development Plan for the 2014-2018 years” (CNO's Navigation Plan 2014-2018). This plan describes the main activities for the preservation and improvement of the combat capability of the United States naval forces. Fulfilling all the prescriptions specified in it, the Navy is expected to be able not only to maintain the existing state, but also to significantly improve it. 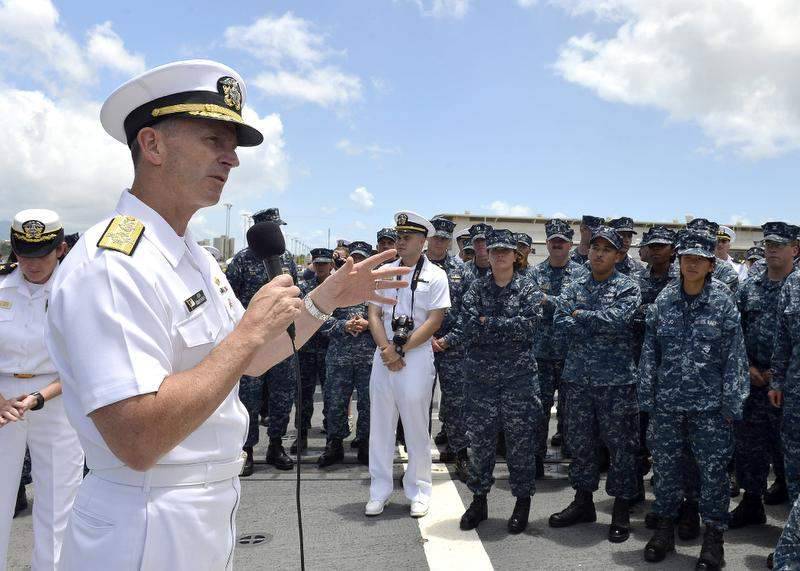 US Navy Chief of Staff Admiral Jonathan Grinert answers questions aboard the Halsey destroyer in Pearl Harbor, Hawaii, on Tuesday. According to Greenert, the development plan for 2014-2018. includes several adjustments that may be caused by budget cuts. (Photo: MCC Julianne F. Metzger / Navy)

The new "Navy Development Plan" is based on proposals and concepts embodied in the recently created "Strategic Defense Guidelines", and therefore represents a strategy for the development of the naval forces in accordance with the latest ideas and requirements for this type of armed forces. In addition, the “Development Plan” corresponds to the general views of the US military on the current and future appearance of the armed forces as a whole.

CNO's Navigation Plan 2014-2018 document outlines the three main objectives of the US Navy. It is the ability to conduct combat operations, presence in the necessary remote regions and a demonstration of strength, as well as readiness to perform the assigned tasks. In accordance with the three main objectives in the Development Plan, all current tasks that are planned to be completed in the coming financial years are distributed. It is worth noting that the 2014 fiscal year in the United States begins as early as October 1, and therefore officials from the naval authorities prepared a basic document even before the end of the summer.

The "Development Plan" notes that at present, the US armed forces have to take into account the sequestration of the military budget and reduce their costs. The US Navy command is ready for such challenges and will take into account the requirements of the financial department regarding the amount of expenses. In this regard, in the future, it may be necessary to adjust the five-year plan. However, the naval forces intend to maintain their potential and increase it. So, in the future, the United States Navy will use already tested and mastered tactics of combat work, for example, the so-called air-sea battle (ASB - Air-Sea Battle), which involves both ships and deck aviation.

The authors of the "Development Plan" recognize that future budget cuts will affect the ability to build and purchase new ships. Nevertheless, and in such conditions, they hope to maintain opportunities fleet and bring to the successful end a number of important projects. In order to maintain combat effectiveness (the first main goal under the “Plan”), the following events will occur over the next five years:
- The introduction of the new aircraft carrier USS Gerald R. Ford CVN-78 (scheduled for 2015 fiscal year). In addition, purchases of new and upgraded old F / A-18 Super Hornet, EA-18 Growler and E-2C Hawkeye aircraft will continue;
- Introduction to the fleet of the universal amphibious assault ship USS America LHA-6. This event is scheduled for 2014 year. In the future, it is planned to extend the service life of air-cushion landing boats of the LCAC type and complete the project to create a new landing craft of a similar class (SSC);
- Preservation of the existing fleet of nuclear submarines with ballistic missiles such as Ohio. Simultaneously with the service of these submarines, the project to create a prospective SSBN SSN (X) will continue;
- Creation of new electronic warfare systems and improvement of fire control systems, including the integration of such systems installed on ships and airplanes;
- Active development of the field of electronic warfare. To this end, it is planned to additionally buy about EA-20G Growler 18 aircraft, as well as to complete the program of development of the EW aviation system of Next-Generation Jammer. In addition, it is planned to strengthen the system of electronic warfare on ships and ground objects and create units engaged in defense in the cyber environment. Over the next three years, the US Navy will have 40 anti-cyber threat teams totaling about 970;
- Development of various means associated with the provision of domination under water. It is planned to build ten multi-purpose submarines of the Virginia type, as well as to upgrade the fleet of anti-submarine helicopters MH-60R Seahawk and the P-8A Poseidon aircraft. In addition, the USS George HW Bush CVN-77 aircraft carrier will receive an updated anti-torpedo protection system;
- Improving the performance and combat potential of existing platforms using the new payload. It is planned to equip ships with various new electronic equipment and weapons, including several types of unmanned systems.

The Navy is the "long arm" of the United States and therefore, despite all budget cuts, naval sailors will continue to patrol the oceans and display a flag and force. Over the next five years, given the current needs and budgetary constraints, the command of the naval forces intends to take the following measures in order to maintain its presence in all important regions:
- Keep the number of carrier strike and amphibious assault groups at the required level. One such compound is planned to be held in the Asia-Pacific region, in the Middle East and in bases in the USA;
- Expand your presence in the Pacific. By 2020, the Pacific Fleet should be up to 60% of the total number of warships of the US Navy. As part of this relocation, a number of submarines will be transferred to a base on the island of Guam, and Japanese bases will be assigned to one aircraft carrier and amphibious paratrooper group;
- Introduce into the fleet several new ships and vessels of landing and transport purposes. These are two MLP mobile platforms, two AFSP, 10 JHSV transport ships, and up to 8 ships of two LCS projects. With the help of such measures, the command of the US Navy intends to release a number of landing ships, cruisers and destroyers that can be used to solve other tasks;
- Transfer the four destroyers of the Arleigh Burke project to the base in the Spanish city of Rota, where they will be part of the Euro-Atlantic missile defense system. Two ships will change their place of service in 2014, two more - in 2015. A number of patrol boats and minesweepers will be transferred to Bahrain. The purpose of this translation will be to improve the skills of American sailors and to strengthen the friendly relations between the two countries;
- Create a fifth amphibious assault group. This connection will be formed by 2018 year. It will be based in Australia, from where it can support the actions of the marines in the nearby region.

The third section of the "Navy Development Plan" concerns the maintenance of overall combat readiness. To this end, in the context of budget cuts, it is planned to take a series of measures that, as expected, will help, even in the conditions of economy, not to lose existing successes and gradually improve them. In order to maintain combat readiness, it is proposed to apply a number of measures relating primarily to personnel. The following is planned for the next five years:
- Creation of priority prevention programs among the Navy personnel of sexual crimes and suicides. As part of these programs, it is proposed to raise the priority of various projects related to the psychological support of military personnel, primarily in the field of stress management. Attention will also be paid to the protection and support of seafarers' families;
- Increase the intensity of training. To this end, additional ammunition and equipment will be allocated, such as: targets, hydroacoustic buoys, training torpedoes and missiles, etc .;
- Modernization of state-owned shipyards. In addition to updating the production base, over the next few years, around 1600 new jobs will appear in these enterprises;
- Improving the knowledge and skills of the personnel of the naval forces, as well as the creation of new training groups for 900 places;
- Testing the interaction of the US Navy with the fleets of other countries. The main tool for this task will be international maritime exercises, such as Rim of the Pacific, Valiant Shield or Bold Alligator. In the course of international exercises, among other things, it is planned to work out an air-sea battle.

"The plan for the development of the Navy for 2014-2018 years" was drawn up taking into account the existing program of military shipbuilding, calculated for the next 30 years. In accordance with this program, the US Navy must simultaneously contain at least 306 warships. The average lifetime of the ship will be 35 years. With such numerical and temporal parameters, in order to preserve the minimum required fleet size each year, the naval forces will need to receive the ship’s 8,7. Previously it was supposed to keep this parameter at the level of ten ships per year, but the existing economic problems do not allow implementing such ambitious plans.

It is easy to see that it is precisely the savings on various expenses that the red thread passes through the entire new Development Plan. In drawing up the military budget for the 2014 fiscal year alone, the Pentagon was required to save about 50 billions of dollars. A considerable part of this sum must be borne by the naval forces. Thus, the US Navy, as well as other types of troops, find themselves in an uncomfortable and pleasant position. On the one hand, they are required to cut costs, but on the other hand, a large number of important programs are being conducted at the same time. The termination or even reduction of funding for almost each of them can have a noticeable effect on the state and combat effectiveness of all the United States Navy. Thus, when compiling the list of key tasks for the next five years, the leadership of the command of the naval forces of the United States had to take into account both the savings and the priority of existing programs or the need for future programs. How successful will be the chosen balance - we'll see in the next few years.