6 September 2013
66
Gradually, the Russian financial system approached the bar beyond which a bright image of austerity budget economy appears ... However, not one of the spheres and none of the departments, realizing that the austerity of the state budget cannot do without austerity because of extremely weak economic growth, case does not want to start this savings with yourself. Proposals come from representatives of various services and ministries and at the same time address the need to start tightening belts in other services and ministries. 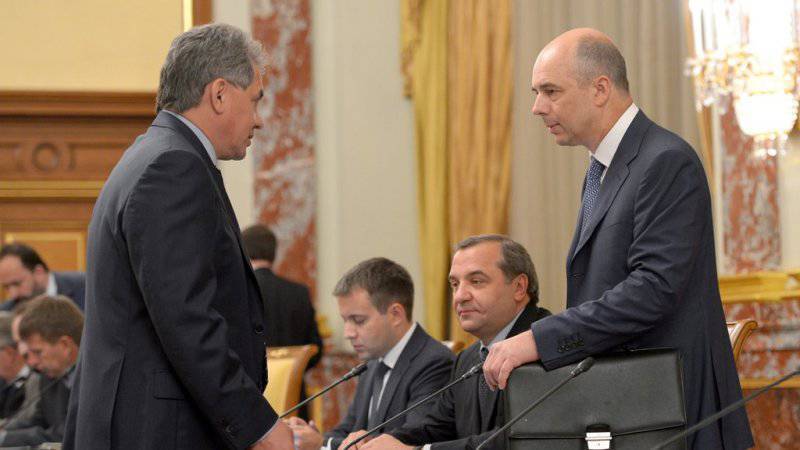 The other day, the “red banner” Ministry of Finance came up with another call for the search for domestic Russian reserves in the format of quite substantial savings. The ministry’s talk of saving is not taken away from Alexei Kudrin’s time, and no one is going to take it away, realizing that if the Ministry of Finance called instead of saving the budget to invest in various projects, it would rather be nonsense, and not only domestic. That's why he and the "Red Banner" Ministry of Finance to periodically pull us down, saying: there is no money! ..

One of the areas of future savings defined by the Ministry of Finance and Anton Siluanov personally is the so-called partial transfer of funding for military reform from the deadlines set in the plans to deadlines. That is, the idea is this: there will be funding, but not today or tomorrow, and, perhaps, even the day after tomorrow. According to the leadership of the Ministry of Finance, this will allow to keep tangible funds in the budget for a period of low economic growth, but when growth becomes high enough, funding will continue in full.

An interesting nuance. In one of his interviews before the start of the G20 summit in the northern capital, exactly the same was stated by the former Minister of Finance, Mr. Kudrin. If you recall his rhetoric at that time, when he spent his last days in his ministerial chair, then Alexey Leonidovich said that spending up to 20 trillions on defense in the next 8-9 years is disastrous for the domestic economy. These words and some consultations with partners in the USA cost Kudrin the chair. Today it turns out that the Russian Ministry of Finance does not just listen to the opinion of the ex-minister, but also takes this opinion, which is called, in his turn.

So, according to the plans of the Ministry of Finance, in the rearmament of the Russian army, which is currently under way, certain pauses and revisions must be made. For example, instead of the planned 70% upgrade of military equipment to 2020, now it is planned to stop at 50% rearmament, which will save about 5,7 trillion rubles. The idea is connected with the fact that 50% of new equipment is supposedly normal for many foreign armies, and we, you know, have threatened all 70. Whom do we want to surprise with these 70 percent? .. They are going to transfer a certain share of expenses, as they say, “later” ...

Nobody argues, 5,7 billion rubles of savings in current conditions is more than a solid figure. But if there is a situation in which in a year or two it will turn out that 50% new technology in the military is too much ... And let's stop at 40%: let's save another trillion 2-2,5. So to say, where fifty, there and forty, and where forty, there and "the current percentage is enough." At the same time, everything will also be explained by the low growth of the economy - can't you say anything ...

He intends to save the ministry under the leadership of Anton Siluanov on the rearmament of the Russian army and in the very near future. For this, it turns out, it is enough to reduce the percentage of planned production growth in the field of defense industry from 15,8% per year to "optimal" 10%. If you make such an interesting manipulation, in fact declaring to the military industrialists that they need to work a little less intensively, then the savings for the budget will be more than a trillion rubles to 2016 of the year.

However, on this the Finance Ministry Anton Siluanov, as they say, did not calm down. On the basis of gushing ideas about major economy, representatives of the main financial department in the country went into a rage so that they sacrificed the sacred ... In this case, the Saints found the central office of the Ministry of Defense, which the Ministry of Finance proposed to cut down on 10% with the motivation performance of duties overlap.

Here is one of the quotations of the representative of the Ministry of Finance on this account:

... it (the structure of the central apparatus of the Ministry of Defense - author's note) testifies to serious problems in the administration of the military department.

The Ministry of Finance also calls on colleagues from the defense ministry to reconsider the controversial decisions signed by the former minister (Anatoly Serdyukov) on cash payments.

Most likely, in the latter case we are talking about giant awards, which Mr. Serdyukov wrote out to his closest entourage, and decisions on bonuses, judging by the claims of the Ministry of Finance, also apply to current officials of the Ministry of Defense.

Of course, saving on the bureaucratic horde is a good thing. It would have looked even more potent if only unmercenaries worked in the Ministry of Finance, who would work hard to replenish the state budget without excessive bureaucratic fecundity.

The response to the department of Siluanov from a representative of the Ministry of Defense was as follows:
First, let the other departments put things in order, and then just for us. In the same Ministry of Finance, how many duplicate structures? And the others that the states are not bloated?

The official offended the official. A rare case in domestic practice, but in a “low-fat” economy, this is likely to occur more and more often.

Total: one minister and 10 deputy ministers.
Let us see what kind the central unit of the Ministry of Finance has, which states that it is necessary to optimize bureaucratic personnel in the defense ministry.

One minister and 9 deputies.

So this is why the Ministry of Finance declares the “bloating” of the state of the Ministry of Defense - Siluanov is one less deputy minister than Shoigu. But here, too, is not all easy. Anton Siluanov unexpectedly (apparently, also in order to save budgetary funds) decided to take in his ministry and 10 th Deputy Minister, who should be the former head of the Federal Financial Markets Service Dmitry Pankin.
Well - now full equality in the number of officials in the central offices of the two ministries! It remains to wait for anyone with such a bureaucratic equality blow to the opponent will be more powerful.

The main thing is that in order to replicate the statements about the need to save on the military budget, the ministers do not need to recruit for themselves a dozen more deputies, measured by the size of the central offices ...