Democracy to the Third World War will bring 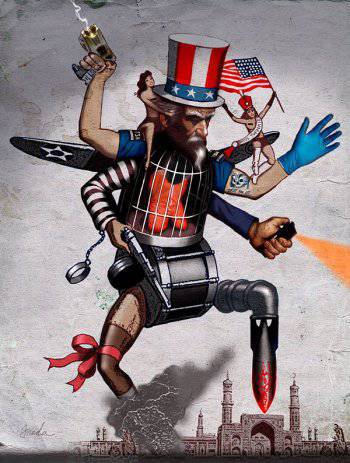 On the popular Activist Post, bloggers and professional publicists are wondering if Obama will lead the world to a catastrophe? The fact that the President of the United States is a sample of the “raging” aggressor is not even questioned by the authors of articles and notes. Obama rubs his hands in anticipation of the massacres, and thinks of his people as a bunch of stupid people - approximately in such terms, American journalists speak of their president, who is elected, as we know, in the most democratic way.


Stephen Lindman from Chicago пишетthat "raging" Obama intends to commit massacres. The attack of Syria is no longer in doubt - it is only a matter of time. Hundreds of Tomahawks may be launched in the next few days. This will lead to great destruction. Perhaps thousands of people will die, the author writes. Much more will be wounded and maimed.

Bombing is a long-standing US policy. America is a killing machine. Her история - all the blood. It is built on lies, the journalist seals.

John Kerry is the same as Colin Powell. He has lied more than once, including about the “evidence” of Asad’s use of chemical weapons. All this is just a reason to start a war.

Other liars are the UK, France, Germany and Israel, said the journalist. They are "imperial partners." Lies are contagious, says Lindman, and these states spread their own lies about the planet.

The author cites various newspaper reports about how British intelligence allegedly intercepted radiograms in which Syrian commanders ordered “to use chemical weapons” about chemical shells fired in fourteen minutes, etc. The same goes for “French intelligence” , somehow independently counted the number of people killed by Himataki in Syria. German intelligence is also confident that Assad is responsible for the gas attack. Proof: Militants are “unable to conduct such concerted attacks.” However, Germany recognizes that it has no definitive evidence. As for Israel, then, the author notes, on September 27, the newspaper Haaretz published an article entitled “Report: the Syrians repeatedly used chemical weapons against the rebels”. At the same time, an unnamed "high-ranking Israeli official" noted that neither Israel nor the United States have intelligence information about the direct participation of Assad or his closest entourage in the attack on August 1. However, the conclusion is: "However, there is no doubt that chemical weapons were used by elements from the Syrian army."

The American media, the author also writes, largely support the war. They keep pace with the lawlessness, not thinking about the possible consequences. World peace hangs in the balance. Attack Syria - the road to the regional fire, and there to the Third World ...

Famous US journalist John Rappoport announcesthat the "face" of the American government should be investigated by forensic psychologists.

The US government in its current form, the author writes, devoted herself entirely to the cause of war. In addition to war, it knows nothing. And it's not just about the Pentagon.

The national health care system is fighting fraudsters who cure cancer everywhere. The IRS (tax authority) is fighting an internal audit. The Department of Justice does not stop the search for drug dealers (except when it enters into transactions with them). The NSA is spying on everyone all the time and everywhere - in order, perhaps, to catch a few loser terrorists. The US Department of Agriculture is waging war on farmers and public health. WINPAC (a CIA group), previously engaged in “reports” on Iraq, is currently “interpreting” reports about the use of chemical weapons in Syria - in order to support the White House’s bombardment of Syria. War, war, war!

If you work for the government, you will somehow enter the battle, the journalist notes. This will give you a shot of adrenaline and relieve you from boredom.

It is curious that these wars are waged and are waged, but does anyone really win a real victory in them? Here are some examples: wars against poverty, cancer, and drugs. So what? The situation has only worsened. Or did the States win in Vietnam? ..

And now - Syria. To start a war with her, the government needs any excuse, real or imagined, or staged, writes Rappoport.

We - the audience in the circus, says the author further. The federal government is less and less limited in its actions. It originates in ancient history. Only a fool is capable of working for the government and at the same time offering to reduce his power. No, push - that is the goal of the state. The one who succeeds in this finds new goals. A lion on a plain may wander for a while, but, noticing a target, he hides and observes. It all comes down to this. In the novel “1984” by J. Orwell, the ongoing war against enemies is the cornerstone of society. Details of the war there do not matter. It is only important to wake up the emotions.

There is, in fact, a psychological need to rationalize insane actions, the author notes. As an example of one of the "rationalizers," the author cites Senator John McCain, who even surpassed Joe Biden in "clumsiness" and "muttering." According to McCain, not answering Syria means "to undermine the credibility of the United States of America and the president." In other words, despite the gradual “disappearance” of solid evidence that Assad used chemical weapons against his own people, the lot is cast, the journalist writes. The president said that the fact is obvious - therefore, the United States must attack. Otherwise, no one will believe in our ability to lie and spread lies. And it will have disastrous and even tragic, bitterly ironic Rappoport.

Article "The high cost of saving Obama's face" popular opposition writer Paul Craig Roberts calls the power nesting "The White House of Fools", which left the United Nations, NATO, the British Parliament, and the rest of the world too. Obama was cornered — along with Israel and the neo-cons. Israel, the author believes, pushed him to war with Syria - a war that will have to be waged all alone. But B.H. Obama came up with a way out of this ridiculous situation: he decided through the Congress to lie more. And now the White House and its “presstitutes” (media) are telling Congress that for the president “the only superpower in the world” it is humiliating to abandon the attack of Syria - only because it was not true. Congress must “preserve the face” of the liar, “America’s first black president,” otherwise the prestige of the United States and its credibility will be lost.

In fact, this means, writes a journalist, that confidence in the Israeli lobby and neo-cons will be lost - if America does not commit a new war crime in the Middle East.

And what is this "socialist" president Hollande doing there? What prompted him to demonstrate that France is “Obama's whore”? ..

Today, the overwhelming majority of the American people are against the attack on Syria. Americans have already understood: Washington is leading an endless false war. At a minimum, Americans simply do not see the point in costly wars. At a time when a significant portion of Americans have difficulty paying for mortgages, cars, and many have nothing to eat, the wars of Washington may seem like luxury, writes a publicist.

In these wars, the civilian population of Afghanistan, Iraq, Libya, Pakistan, Yemen, Somalia and Syria suffered. Tens of thousands of young American citizens must be added to this - either killed or maimed, or suffering from post-traumatic stress. The wars that endlessly leads Washington have caused divorce, alcoholism, drug addiction (talking about veterans). Many former military were homeless.

If Congress approves of Obama’s war today, he will prove, continues Roberts, that American democracy is a hoax. Where is democracy there, when the tops can do whatever they want, can commit any crimes, despite the opposition of the majority of citizens? And if Congress approves of Obama’s deceitful plan, American democracy will never recover. If Congress makes itself the servant of the executive, it will never again have an independent voice. It’s better to close it immediately, the journalist suggests.

And if European governments approve of Obama’s lies, this means a common end to the democratic prestige of the West. The voice of the West will no longer have any moral authority.

“The Obama regime embodies the degeneration of the American state. Instead of voting on the issue of allowing Obama to attack Syria, Congress should vote on the impeachment of Obama and Kerry. Their blatant lies, dictatorial claims and arrogant inhumanity are weighty arguments for eliminating them from their posts. ”

The Obama regime has become so transparent, the author further notes that it makes you wonder: how stupid is the government considering its own people?

After all, the White House, relying on its ministry of propaganda (it is also the “presstitute”), deprives Americans of common sense and forces them to take science fiction as the truth. Prostituted media can also silence the conscience of Americans.

Today, these media and the House of Representatives continue to talk about the destruction of "their own people" by Assad, but it is their own people who support Assad. Surveys show that Assad has much greater support from the Syrians than any leader in any Western country. In this sense, Cameron, Hollande, Merkel and Obama are nothing compared to Assad.

Bush’s criminal regime brought neither freedom nor democracy to Iraq, comrade Roberts notes. War criminal Obama destroyed Libya. As for Afghanistan, the goal of the war was never indicated there. No one knows what this war is and why it continues.

The lies of Obama and Kerry are so transparent, the author writes, which makes one wonder: is the US foreign policy under the control of Israel? Financial policy is concentrated in the hands of a small handful of banksters controlling the US Treasury, the Federal Reserve System, and financial regulatory agencies. Foreign policy is “the prerogative of the lobby of Israel and the neoconservatives, each of whom is closely associated with Israel,” Roberts points out. Americans have, in fact, neither the right to vote, nor representative power.

Present America is a country where the tiny elite has all the power and acts as it wishes. And yet, hopefully, Roberts continues if Congress refuses to commit a war crime based on Obama’s lie and forbids attacking Syria, it will mean the end of the influence of the Israeli lobby, bloodthirsty neoconservatives and such warmongers like John McCain and Lindsay Graham.

In the new world, where Washington’s aggressiveness would be excluded, the governments of various countries could, despite the power of selfish interests, come together with useful goals: for example, protect the fragile environment from predation of private capital.

It was a look from America.

Observed and translated by Oleg Chuvakin
- especially for topwar.ru
Ctrl Enter
Noticed oshЫbku Highlight text and press. Ctrl + Enter
We are
Results of the week. “We don’t have Chicago here, but we don’t like it when we are put under our tail!”Syria: Americans scare themselves, and Asma Asad buys chairs
Military Reviewin Yandex News
Military Reviewin Google News
97 comments
Information
Dear reader, to leave comments on the publication, you must sign in.