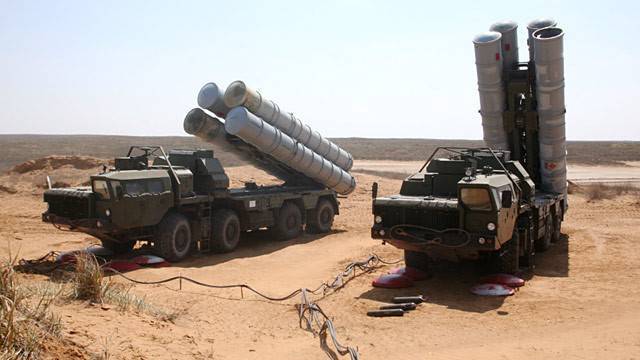 Moscow probably supplied Damascus with the first launchers and anti-aircraft guided missiles (SAM) of the C-300PMU-2 air defense system, according to the World Trade Analysis Center weapons (TSAMTO). In this case, the achievement of full combat readiness of Syrian C-300 can be expected no earlier than the end of 2014, the beginning of 2015, noted in TSAMTO.


As noted in TSAMTO, “the contract seems to be concluded for the supply of C-XNUMPPMU-300 AAMS. Realization of supplies according to such a complex system, which includes many components, is carried out in stages. "

According to experts, Syria under this contract could have been delivered at the first stage part of the launchers of type 5P85CE (5P85TE) and Zur 48H6X2 in containers, as well as part of the logistics.

As noted by the Center, “as a rule, the delivery of key components that ensure the integration of the system into a coherent whole is carried out last. This is determined by the sequence of assembly and installation of the system in the country of purchase. In particular, this applies to the command point of the control system, the command and control center, radars and all-high-altitude detectors. ”

In addition, without the transfer of the complete set and the integration of all elements of the complex, the system cannot be used to solve problems for its intended purpose.

Supposedly, deliveries under this contract should be completed no earlier than mid-year 2014. After delivery, commissioning and comprehensive verification of the operation of all the equipment included in the C-300PMU-2 ZRS, it will take some time to train Syrian specialists.

“Therefore, the achievement of full combat readiness of Syrian C-300PMU-2 (if they ultimately are delivered in full standard equipment) can be expected no earlier than the end of 2014 — the beginning of 2015 of the year,” noted TSAMTO.

It should be noted that on Wednesday, President Vladimir Putin announced that Damascus had already received separate components of the C-300 anti-aircraft missile systems from Moscow, but the delivery has not yet been completed, so now it is impossible to use the delivered C-300 as a single air defense system.

The C-300PMU-2 Favorit, a versatile mobile multi-channel anti-aircraft missile system, is designed to defend the most important objects from the massive strikes of modern and advanced aircraft, strategic cruise missiles, tactical and operational-tactical ballistic missiles and other means of air attack in the entire speed range of their combat use , including when exposed to intense active and passive interference.

The C-300 system is a further development of the C-300PMU-1 anti-aircraft missile system. Combat capabilities increased due to the creation of a new 48H6Х2 rocket, which has an increased effectiveness of hitting ballistic targets at ranges up to 40 kilometers while ensuring the detonation of the combat charge of the target, increasing the distant border of the strike zone of aerodynamic targets to 200 kilometers, including when firing in pursuit, expanding the information capabilities of the command point system for detecting and tracking ballistic targets while maintaining aerodynamic targets detection sector.

Ctrl Enter
Noticed a mistake Highlight text and press. Ctrl + Enter
We are
The action “Military service under the contract is your choice!” In Rostov-on-Don: future contract servicemen, exhibitions and “Russian Knights”ZRK C-200 rust in the woods near Moscow
80 comments
Information
Dear reader, to leave comments on the publication, you must to register.