Creating 155-mm / 52 self-propelled howitzer Krab is one of the long-term programs of the Polish defense industry. The ACS is an armored HSW development chassis with an installed licensed tower of the British 155-mm self-propelled howitzer AS90 (the tower was developed by Vickers as early as 1980-s) with a 155-mm / 52 swinging part produced by Nexter Systems of France. The first eight Krab ACSs (the battery pack - two prototypes and the first six serials) were delivered to the Polish Army in September 2012. Under the terms of the contracts concluded by the Ministry of National Defense of Poland with HSW in May 2008 and June 2011, the delivery of the first Krab division kit in the number of 2015 units is expected by the end of October 24. However, after the delivery of these eight systems, the delivery of the remaining 16 howitzers was in doubt. 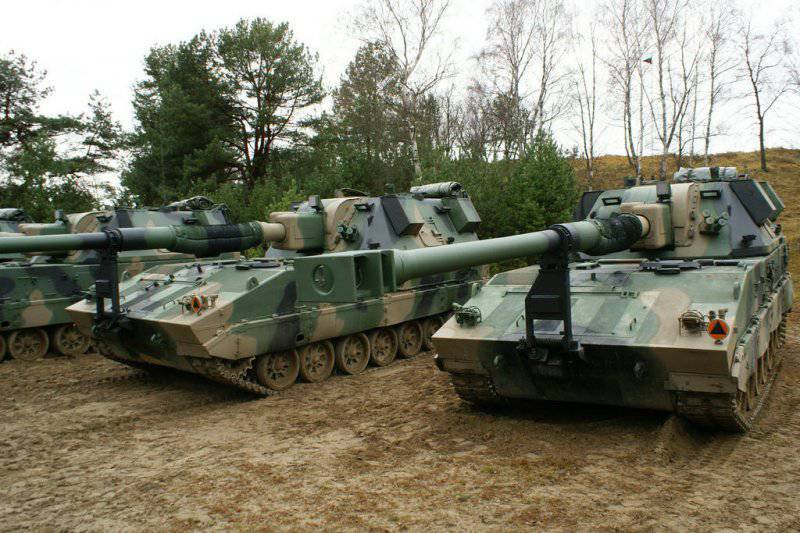 As reported by Jane's Defense Weekly magazine in Remigiusz Wilk "MSPO 2013: Poland signs agreement for Turkish T-155 Firtina hulls for Krab SPA," it became impossible to equip the planned KRA with the S16U Polish diesel engine used on the first models with the S12U Polish diesel engine - because the engine is not produced from the 2009 of the year, and the PZL Wola plant that produced it is closed. The German MTU-881 KA 500 diesel engine proposed as an alternative requires a larger engine-transmission compartment and does not fit in the chassis of the HSW. On top of that, in 2010, in the Polish factory Bumar Labedy, the first serial Krab armored hulls had microcracks in the armor plates. It is reported that HSW made a financial claim to Bumar Labedy in 15,5 million for the supply of low-quality armored corpses. In July, 2012, Bumar Labedy acknowledged his responsibility and expressed his willingness to reimburse the marriage.

Under these conditions, nothing was left but to refuse to use the Krab armored hull and chassis manufactured by HSW. As a result, the aforementioned agreement was signed with the ICEC for the supply for manufacturing 16 ordered by the Polish Ministry of National Defense SAU Krab armored hulls and running gears from the Turkish 155-mm / 52 self-propelled howitzer T-155 Firtina (representing the licensed version of the South Korean SAU K9 Thunder). The T-155 Firtina uses the MTU-881 KA 500 diesel engine on a regular basis.

The article states that, in view of the fact that the British tower from AS90 used on Krab is heavier than the standard Firtina tower, it will take quite serious work to integrate it into the Turkish corps. In this case, the ammunition transported will be reduced from 60 shots to 40. In addition, for 16 manufactured Krab 155-mm / 52 swinging parts will be ordered from the German group Rheinmetall instead of the French Nexter.

Thus, now all 16 ordered Krab SAUs will be completed with Turkish hulls. It is unclear whether HSW will acquire a license for the production of hulls and running gears from ICEC for the next planned to release ACS, or whether it will be limited to acquiring ready-made ones.

The first eight SAUs of the Crab, handed over to the Polish army in September 2012 of the year, have already completed the first stage of military tests and will be returned to HSW in September 2013 of the year for modifications and modifications. It remains unclear whether Bumar Labedy will repair or replace defective armor plates at the first ACS, or simply pay for the replacement of their defective armored corps with Turkish corps - which will require complete rework of the first cars, which in fact will only have a tower.


Comment bmpd. This история clearly demonstrates the very low level of modern Polish defense industry, for which even the manufacture of a small number of relatively simple chassis for self-propelled guns presents serious difficulties. With the purchase of Turkish chassis, the same Krab self-propelled guns finally turns into a “designer” of imported components (and wouldn’t it be easier then just to buy ready-made Firtina in Turkey?). In light of this, the true value and the degree of realizability of the “concepts” of constantly developed and demonstrated “Poland” models of promising armored vehicles can be clearly seen - from the notorious Anders to a supposedly promising demonstrator exhibited at the same MSPO 2013 tank PL-01.

Ctrl Enter
Noticed oshЫbku Highlight text and press. Ctrl + Enter
We are
Polish companies presented two new self-propelled artillery installationsPoland will build Krab-based ACS on the basis of the South Korean KHNUMX
5 comments
Information
Dear reader, to leave comments on the publication, you must to register.