Small arms of the USSR: on the way to automatic weapons

5 September 2013
35
By the 30s of the 1th century, world military thought had finally and irrevocably established itself in the idea that a lot of troops - this, of course, was good, but even better if this mass of troops would produce as many bullets per XNUMX km as possible. front. At the same time, the struggle for rate of fire began even earlier. In the Middle Ages, there were a kind of “machine gunners” - the English yeomen who could shoot arrows with astonishing speed, the same can be said about the Mongolian horse archers. If we talk directly about the infantry weapons, then by 1910 almost all the leading designers of the world came to the conclusion that it was necessary to develop self-loading automatic rifles.


This trend has not bypassed Russia, where the work on the development of automatic systems was carried out by many designers, but the most successful of them was Vladimir Grigorievich Fedorov. Fedorov came from an ordinary teacher's family, but fate prepared him a rather interesting way of life. Vladimir Fedorov was a knight of many awards both of the Russian Empire and the USSR, including the unique title “Hero of Labor” - the predecessor of the award Hero of Socialist Labor, he managed to advance to the rank of lieutenant general of the Red Army.

Fedorov designed his machine gun as captain of the Russian Imperial Army in the 1913-1916 years. And he began the first work on a self-loading rifle in the 1906 year. His first rifle was developed under the standard cartridge of the famous Russian three-ruler 7,62x54R and was equipped with an integral magazine with 5 cartridges capacity. It was tested in the 1911 year, and in the 1912 year the Artillery Committee even approved its release, ordering 150 copies for military trials. At the same time, the designer worked on the creation of a cartridge that would initially be adapted for automatic weapons. In 1913, he proposed the design of an automatic rifle (the term “automatic” was introduced later, only in the 1920's) under a new cartridge of his own design. 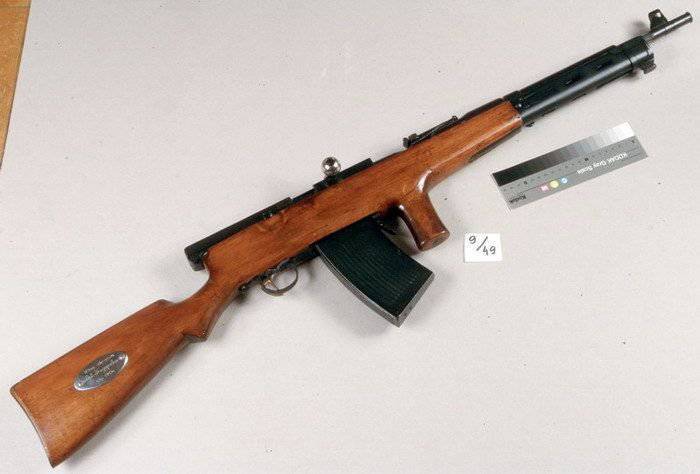 The patron of Vladimir Fedorov had a pointed bullet of a caliber 6,5-mm and a mass of 8,5 gr. The initial velocity of this bullet was approximately 850 m / s, and the muzzle energy was 3100 Joule. At the same time, the standard Russian rifle and machine-gun cartridge 7,62х54R, depending on the version of the equipment, had muzzle energy around the 3600-4000 Joule. At the same time, 6,5-mm cartridge Fedorov gave a weaker recoil impulse, compared with the standard cartridge 7,62x54R and had a smaller mass.

All these qualities, along with a smaller muzzle energy and the design of the sleeve without protruding rim, made Vladimir Fedorov's cartridge better suited for automatic weapons, allowing it to be adjusted reliably from high-capacity stores. Tests began in 1913 year, but the outbreak of the First World War has made its adjustments. By 1915, the Russian Imperial Army experienced an acute shortage of small arms. This was especially true for light machine guns. As a result, Fedorov's new automatic rifles were ordered as light weapons to support infantry units, but already under the Japanese rifle cartridge 6,5x50SR Arisaka.

He possessed characteristics similar to the patron Fedorov, and at the same time there were enough of them in Russia, since the Japanese patrons at the very beginning of the First World War were bought together with Arisaka rifles in order to compensate for the army’s losses in small arms. Fedorov’s automatic rifles that had already been manufactured under the Japanese cartridge were altered by installing a special liner in the chamber. It should be noted that both the cartridge for the Arisaka rifle and the cartridge Fedorov were typical rifle cartridges in their ballistic characteristics, although they differed in smaller caliber and, accordingly, in power. They were not an interim development, as claimed in a number of sources. 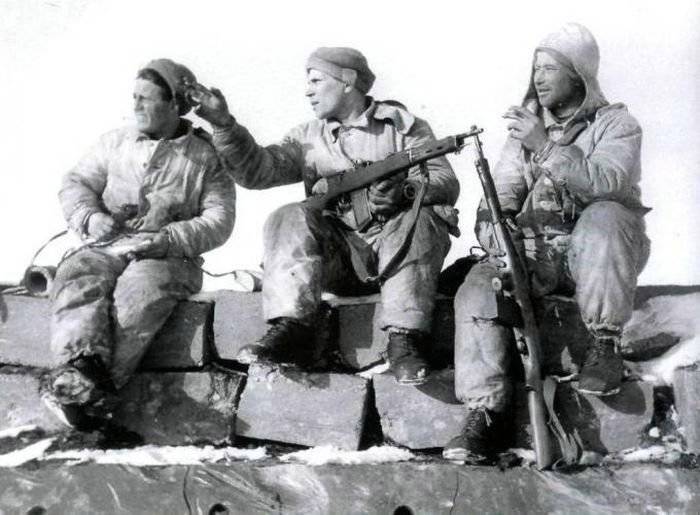 By the summer of 1916, Fedorov’s experienced assault rifles passed a series of troop tests in a special company, after which it was decided to equip them with a team from the 189 of the Izmail regiment (158 soldiers and 4 officers) who left for the Romanian front in December 1. The decision on the serial production of the Fedorov's 1916 linear rifle was made, they should have been produced at the Sestrorets Arms Factory. However, in the conditions of a large-scale war, the enterprise could not even cope with the release of its main products (rifles, model 2,5 / 1891), so mass production of Fedorov’s automatic rifle was not established.

It began to be mass produced only after the revolution at the Kovrov plant (today it is the plant named after Degtyarev). However, the order was reduced from 15 000 to 9 000 units. Until the 1924 of the year, when the release of the machine Fedorov stopped, it was possible to collect all 3 200 units of these small arms. In 1923, it was upgraded, the weapon received a new impact mechanism, a sight and a magazine. Fedorov's guns remained in service with the Red Army until 1928. After them, it was decided to remove from service because of the unification of the used cartridges. All the machines were transferred to the warehouses, but still useful to the military. In 1940, they were used in Karelia during the Winter War with Finland.

It should be noted that the development of Fedorov could not be used as a mass army small arms, since it did not ensure the reliability of work in difficult and harsh operating conditions. In addition, this machine was quite difficult to maintain and manufacture. An analysis of the only reliable source for operating the machine available at the moment, brochures from 1923, demonstrates that the main problem of Fedorov’s machine was not so much the design flaws as such, but the low quality of the construction materials used - metal influxes, sludge parts, etc. , as well as poor quality ammunition that was supplied to the troops. At the same time, Fedorov's machine gun was the first working model of an individual automatic weapon, which, moreover, was used in battles, which is the main merit of this machine gun, as well as its designer.

The first model of an individual automatic small arms, which was created and put into service already in the Soviet Union, was the automatic rifle design Simonov - ABC. In competition with another well-known Soviet gunsmith designer - Fyodor Vasilyevich Tokarev, Sergey Gavrilovich Simonov developed a weapon that was adopted by the Red Army in 1936, and already in 1938, the infantrymen of the 36 of the Moscow Infantry Division were armed. In 1, ABC-1939 was able to receive the first baptism of fire during the war with Finland. However, the main method of firing from ABC was shooting single rounds, shooting in bursts was possible, but only in emergency cases. 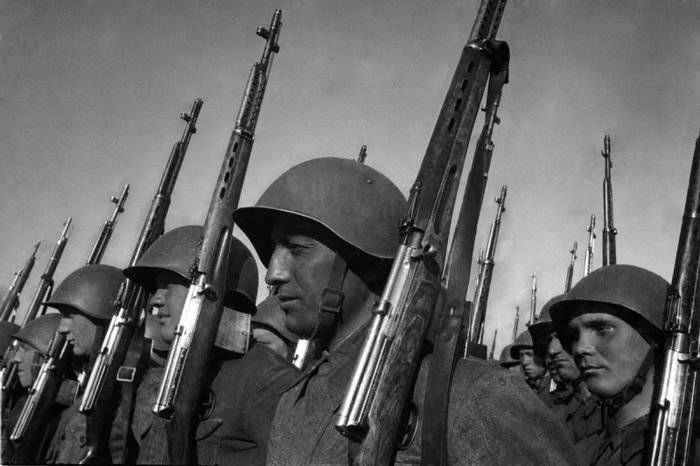 17 July 1939, guided by the desire to re-equip the Red Army with self-propelled rifles as soon as possible, the Defense Committee, following Stalin’s personal instructions, decided to concentrate all efforts of the weapons commissariat on another self-loading rifle, SVT-38. Played his role and the fact that Stalin knew Tokarev well enough, and the name of Simonov told him little.

SVT was adopted by the Red Army as early as 1938 and received the designation SVT-38; in 1940, a slightly lighter version of the rifle was adopted, which received the designation SVT-40, the rifle continued until 1945, and in the first half of the war at an increasing rate , and in the future all in smaller and smaller quantities. In total, up to 1,5 of millions of these rifles were produced, including up to 50 thousands of SVT-40, made in the sniper version.

In the army, this rifle was called "Svetka". The rifle was used during the Soviet-Finnish war, as well as during the Great Patriotic War. In a number of units of the Red Army, it was the main weapon, but in most cases only part of the infantry was armed with it. The general opinion about CBT was rather controversial. On the one hand, in the Red Army, SVT-40 has earned the reputation of not the most reliable small arms, which was sensitive to frost and dirt. On the other hand, for many infantrymen this rifle enjoyed well-deserved love and popularity, since it was significantly superior to the Mosin rifle in firepower.

The German and Finnish soldiers highly appreciated captured SVT-38 / 40, the Germans even adopted them as small arms of a limited standard. The US military also spoke fairly well about the SVT. All this can be explained primarily by the fact that the preparation of the main mass of infantrymen in the Red Army was at a low level, as well as the low level of service for small arms under front-line conditions (the use of unsuitable or low-quality lubricants), as well as the massive use of American powder in cartridges. (delivered to the USSR under the Lend-Lease), which gave a lot of soot. It should be noted that after years of 20, similar problems began to be pursued by the young American M16 automatic rifle during the Vietnam War, which, however, did not prevent her from becoming one of the best models of small arms in her class. 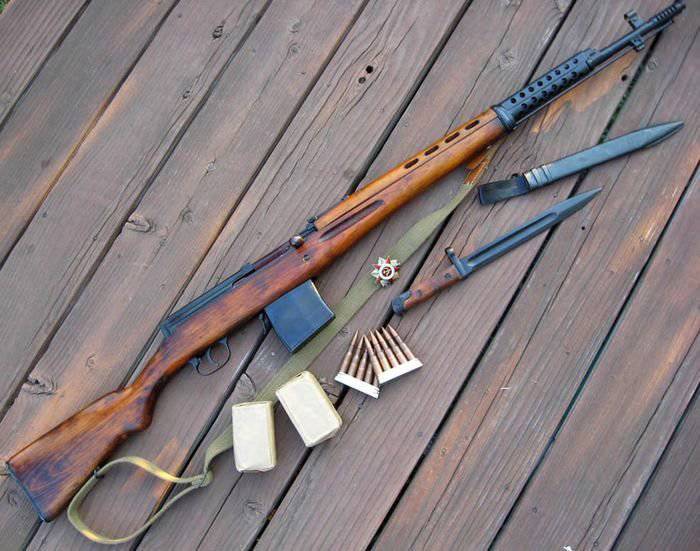 Many units, as well as individual fighters of the Red Army, who had a sufficient level of training, such as marines, successfully used the SVT until the end of the war. At the same time, the sniper version of the SVT-40 in terms of effective range and accuracy of shooting was inferior to the Mosin sniper rifle. 1891 / 30's, so by the middle of the Great Patriotic War, it was replaced in the production of less rapid and outdated, but more accurate Mosinkoy.

SVT-40, as its name implies, was a self-loading (semi-automatic) weapon. The rifle worked on the principle of removal of gases from the barrel and had a short stroke of the gas piston. Locking barrel by skewing the shutter in a vertical plane. The rifle had a composite wooden bed. The trigger mechanism is automatic. SVT-40 was equipped with a box-shaped, two-row, detachable magazine for 10 cartridges. The opportunity to equip stores both separately from the rifle and in the closed state was realized with the help of standard 5 holders of Mosin rifle cartridges. Sights are open, consist of a fly with a headset and a rear sight, which can be adjusted in range. The rifle had a muzzle brake and a gas regulator that allowed changing the amount of gases discharged from its barrel. Additionally, it was completed with a bayonet, which could be attached to a rifle if necessary.

The SVT-38/40 was not inferior to the American self-loading rifle M1 Garand and was clearly superior to the later German samples G.41 (M) and G.41 (W). A significant number of Soviet rifle automatic rifles (about 1 million SVT were produced before the war) came as a surprise to German soldiers at the start of the war. In the summer of 1941, a German soldier wrote in a letter home: "The Russians are fully armed with light machine guns." Famous Commander 2nd tank Heinz Guderian, in his report on the experience of conducting military operations in East Freon on November 7, 1941, wrote: "Her (Soviet infantry) weapons are inferior to German, with the exception of an automatic rifle." 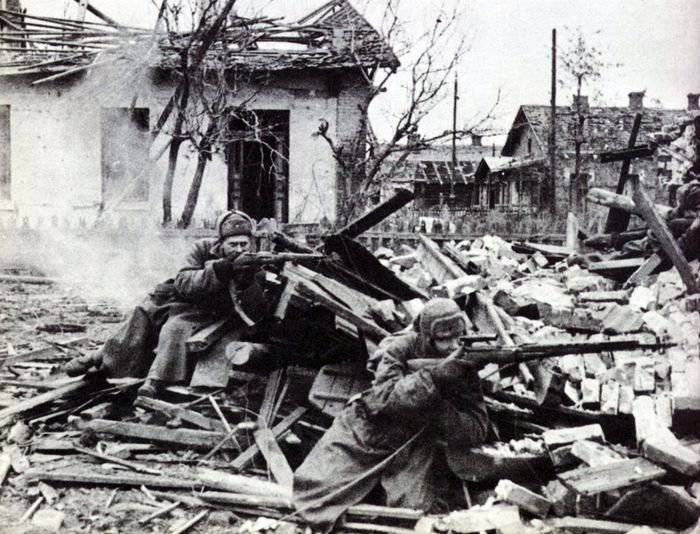 However, with all the usefulness of automatic and self-loading rifles, in conditions of large-scale war, they had one serious drawback, which negated all their advantages. All of them differed technical complexity, which was beyond the control of a large number of soldiers, recruits, who got into the troops, you can say "from the plow." At the same time, in the able hands of the SVT was a very formidable weapon. And for the mass saturation of "bullets per kilometer front" during the conduct of hostilities were used other types of automatic weapons - submachine guns (PPSH, PPS).