What are tanks afraid of?

April 6 2013
36
To overcome a tank The ditch invented and constructed many auxiliary devices and mechanisms - starting from fascines (formerly in the form of bundles of brushwood, now - pipes) and ending with tank-laying bridges. But, as a rule, at the right time all this is not at hand. Ideally, a tank should itself, without outside help, overcome the obstacles it encounters. 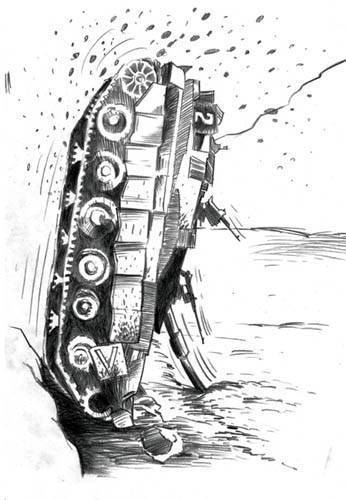 One of the most accessible and at the same time effective anti-tank weapons remains the moat, the classic ancient obstacle, which even today represents a serious obstacle for formidable combat vehicles.

The problem of overcoming the moat was particularly relevant in 1920 – 1930-ies, when the military doctrine provided for the assault of fortified areas "head-on." A classic obstacle in those days was a trapezoid ditch with a width of more than 2 m and a depth of more than 1,2 m, from which the tank could not get out on its own.

In all countries, research and development work was actively carried out to increase the patency of the tracked vehicle; a huge amount of original and even fantastic solutions were offered. In order not to increase the length of the combat vehicle, as a compromise option to the stern of the usual tank was attached a removable "tail" of steel beams, on which the tank rested while overcoming obstacles. In the absence of the need for steel "tail" could be dropped by the crew, and the tank received the desired freedom of maneuver.

In 1929, designer M. Vasilkov placed a second “tail” in front of the T-18, taken from another tank. The car received the nickname "rhinoceros" or "push-pull." Patency improved slightly, but the review from the driver’s seat became useless. 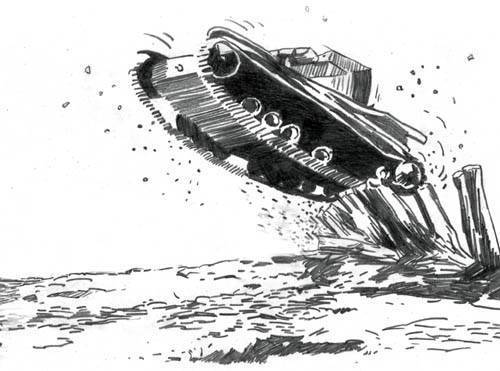 Back in 1930, Soviet designers developed a revolutionary idea: according to their plan, the tank had to simply jump over obstacles, overcoming powerful anti-tank defense lines - ditches, dolbes, "dragon teeth", "hedgehogs" and minefields.

Komkor S. Kokhansky supported another proposal by M. Vasilkov - the project of a “nose wheel extension”: a guide arrow fixed to the T-18 with trailing wheels and wire barriers and improving the cross-country ditches. The principle of operation of the device was based on a portable cylindrical fascine (there were two options: wooden and soft - a canvas cover stuffed with straw). When approaching the moat, the fascina wheel would fall on its bottom, and the tank would roll smoothly over it to the other side of the moat. This made it possible to overcome ditches up to 3,5 meters wide. The idea unexpectedly found wide support in the General Staff of the Red Army. For two years, there have been repeated requests to install a "wheel extension" on a particular type of tank, as a result, the device was mounted on T-26 (under the brand CT-26). 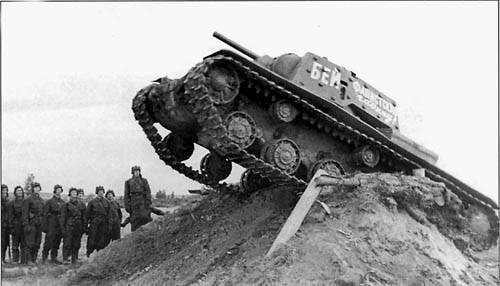 Back in 1911, Lieutenant of the Austro-Hungarian Railway Regiment, G. Burshtyn, developed the design of the Motorgheshyutts tracked armored vehicle with an original lever-roller device. Controlled levers with rollers in front and behind the tank made it easier to overcome various obstacles.

Engineer V. Khitruk suggested installing walking movers on the tracked chassis. To do this, on the sides of the chassis, on a horizontal axis, approximately in the center of gravity of the tank, a pair of levers is attached. In the off position, they are located horizontally. When the car approaches the pit and hits it, the levers turn and rest against the bottom of the obstacle. As a result, the tank is literally “on hand” moving to the other side of the moat.

Hungarian Nicholas Strausler at the end of 1920-s developed in England a device for the Vickers tank, known as the "Strausler legs." Swinging spring-loaded supports increased the length of the tank and helped the war machine to climb over ditches and trenches up to 3 m wide and up to 1,5 depth meters.

Some rather exotic ways of overcoming obstacles were also proposed - for example, using a barrel of an instrument as a support. The length of the barrel of modern tanks reaches 5 – 6 meters, and by itself comes the idea to somehow use this long pipe ... In 1977, inventor Roger Fagel patented a wheeled self-propelled artillery system that could overcome the ditch, leaning the barrel of the gun on its opposite edge. For this purpose, a special supporting “heel” was carried out on the muzzle of the barrel, to which part of the weight of the machine was transferred when the obstacle was crossed. Lowering the barrel and resting the "fifth" in the ground, the armored car, having increased the length of its supporting part almost twice, could crawl to the other side of the obstacle. The barrel played the role of a “nose extension” of the machine. Engineering solution, I must say, unexpected, but usually gunsmiths refer to the trunk weapons more carefully ... 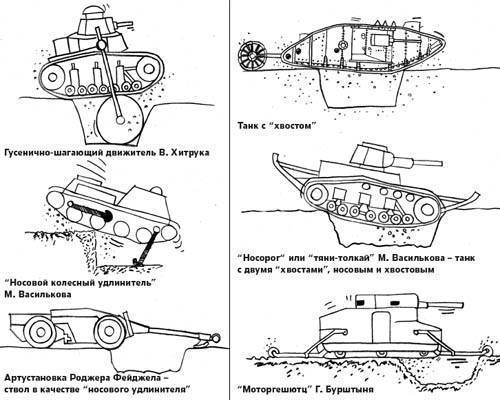 Various devices to improve the tank.

But one wants to overcome in one fell swoop the entire strip of enemy barriers! In the 1930-x domestic designers developed a very revolutionary idea - according to their plan the tank should just jump over obstacles. Moreover, military theorists believed that all tanks in the future world war (now known as World War II) would fly over the obstacle course, literally in one leap overcoming powerful anti-tank defense lines - ditches, dolbes, dragon's teeth, hedgehogs and mine fields.

Tankers of the Red Army on the exercises specifically worked out a combat technique - a jump over an anti-tank obstacle. For this purpose, either a convenient terrain, or a counter-scarp, erected by the enemy, or a springboard specially created by sappers in front of the enemy defense zone, was used. The fact is that a typical 1920 – 1930-x tank was a light and speedy, albeit weakly armed and slightly armored armored vehicle, which allowed it to “fly over” obstacles so well.

Moreover, in 1937, a special machine was developed to overcome the obstacle by jumping. As a base for the CCI-2 (tank to overcome obstacles), the lighter chassis of the T-26 tank was used. The mechanism for making the jump consisted of four eccentrics with a lug grip (two on each side) and a special device that freed them at the time of the jump. The car accelerated in front of the obstacle, the eccentrics, turning at the right moment, literally threw the tank into the air. However, tests have shown that the speed of the machine is not sufficient to make the jump, and because of the rigid suspension system, the normal work of eccentrics was disrupted. 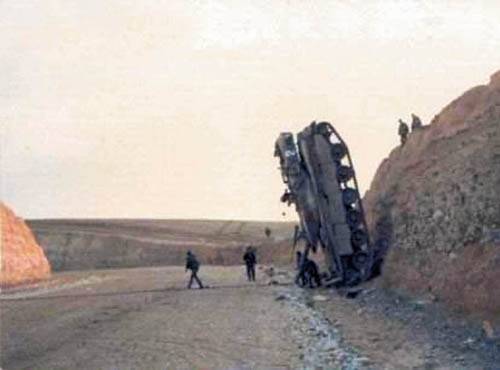 This is what happens if even a modern tank tries to overcome a counterscarp without training.

Interestingly, during the same period, a completely remarkable attachment for a combat vehicle was developed, which significantly lengthened its jump and increased its flight altitude. In 1940, the Soviet engineer M.M. Botvinnik received a copyright certificate on "Adaptation to the tank for the implementation of his jump" through the use of kinetic energy. For this, the tank was supplied with a special swiveling metal U-shaped frame attached to the body of the vehicle on the horizontal axis. In the usual position, the frame was thrown back, and when approaching an obstacle (boom), the special mechanism was thrown forward, so that the tank, having dispersed, rested against it with a frame. The armored vehicle at the same time began to move along an arc of a circle, whose radius is equal to the length of the frame, and jumped over the obstacle like a pole jumper.

The focus for the frame could serve as a specially arranged obstacle in front of the line of enemy defense, as well as the enemy barrier itself. In the case of soft soil on the frame housed dozer-type stops, gnawed into the ground. But then the width of the obstacle to be overcome was equal only to the length of the "pole", which gave few advantages in comparison with a conventional tank. To increase the length of the jump, the inventor equipped the frame with a powerful spring shock absorber. At the moment of impact of the frame on the obstacle, the spring was compressed and held in a compressed state by a special stopper, which released it at the right moment. As the spring opened, the spring transmitted a powerful additional impulse to the tank at the top of the trajectory. 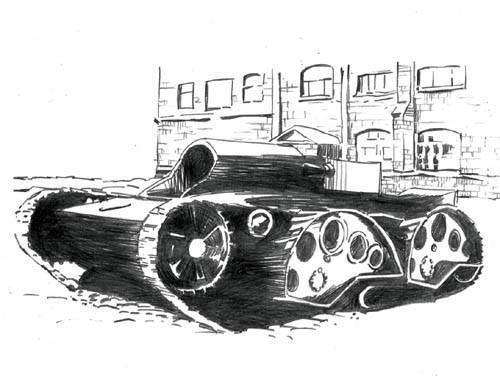 Soviet CCI-2 with side eccentrics. At the time of the jump, a special device released the eccentrics, and they turned around, throwing the tank into the air.

As a result, the combat vehicle moved not along an arc, but along a parabola, that is, along a ballistic trajectory of a body thrown at a certain angle to the horizon! The height of the obstacle to be overcome was significantly increased by lengthening the flight path. After landing, the tank could drop the frame and go on the attack "light." Unfortunately, the practical application of the invention information could not be found.

Modern tanks are much heavier than their predecessors. Today, the weight of the combat vehicle reaches 60 T, so dashing jumps had to be abandoned. True, domestic tanks at military exhibitions and salons make spectacular spectacular jumps from springboards (counter-scars), but this is more likely a demonstration of constructive perfection and reliability of military equipment than a real combat technique. 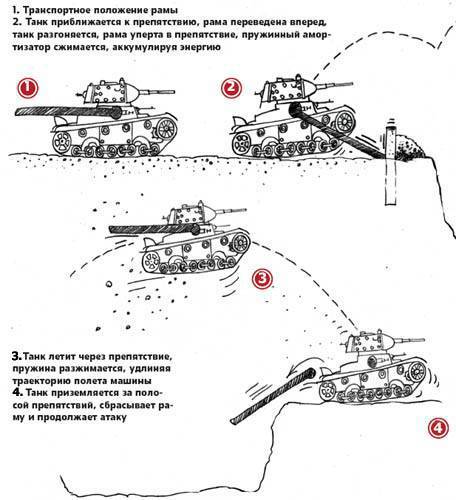 Ctrl Enter
Noticed a mistake Highlight text and press. Ctrl + Enter
We are
Modernized medium tanks in the postwar period. Tank T-44MThe best main battle tanks of the world 2012 of the year
36 comments
Information
Dear reader, to leave comments on the publication, you must to register.