5 September 2013
24
Currently, about fifty states of the world have their own space program and exploit their own space vehicles for various purposes. 37 states at least once sent their astronaut into orbit, but only a dozen of them have the ability to independently launch spacecraft without asking for help from third countries. At the same time, its founders, Russia and the United States, remain the undisputed leaders in the space industry. Nevertheless, the vigorous actions of other states in the foreseeable future may lead to the emergence of new large “players” in the space “arena”. First of all, the list of leaders in astronautics can be replenished by China, which is more than actively developing its rocket and space technologies. 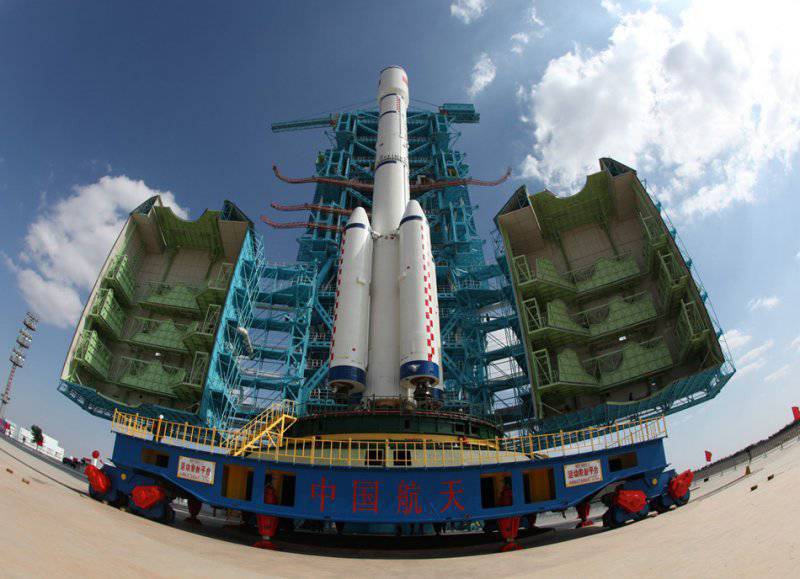 In recent decades, China has been striving to get the title of a superpower, and one of the criteria of such a state is a developed space program. In addition, the developing economy is forcing the Chinese government to invest heavily in satellite communications and other aspects of civilian space exploration. As a result of increased attention from official Beijing, the Chinese space industry currently employs about 200 thousand people, and the industry's annual budget is equivalent to 15 billion US dollars.

Separately, it is worth noting the fact that in addition to real results related to the armed forces, the economy or technology, China imposes an ideological role on space exploration. In view of the end of the Cold War, Russia and the United States have long since not used space achievements as an ideological tool or a reason to compete with each other. China, in turn, has not yet passed the stage of competition with other states and therefore relies on ideological issues as well. This also explains the latest Chinese successes in the space industry.

The emergence in the global space industry of new players with great potential cannot but influence the general condition of the relevant part of the economy and industry. The emergence of numerous European and Chinese projects has already led to a change in the structure of the market of space-related services, such as the launch of commercial space vehicles, the creation of similar technology, etc. If China can fully enter this market, then we should expect new significant changes. However, so far Chinese cosmonautics is not in a hurry to make offers to foreign organizations, limiting itself only to work on the development of its space infrastructure.

The active work of China in the framework of its own space program is often a cause for concern. For example, for several years now, discussions have begun regularly on the possibility of unpleasant incidents caused by the actions of China. For example, according to one of the versions, China can place some nuclear weapons in space. The USA, Great Britain and the USSR signed an agreement back in the late sixties, which excluded such use of outer space. Later, several third countries joined this treaty, including China. Thus, from a legal point of view, the Chinese military cannot use the Earth’s orbit as a location for any weapons mass destruction. At the same time, concerns about a possible violation of the terms of the contract remain and remain the cause of disputes.

It is noteworthy that various opinions related to China’s military projects in space appear with enviable regularity. In this context, we can recall the discussion of the 2007 incident of the year, when a Chinese rocket hit a failed meteorological satellite FY-1C. During a successful attack, the device was at a height of more than 860 kilometers, which was the reason for the corresponding conclusions. The world has learned that China has, at a minimum, a working prototype of advanced anti-satellite weapons. During the previous decades, the leading space powers have repeatedly tried to create similar systems, but in the end all such projects were closed. Tentatively in the late nineties or early 2000th, China joined the United States and the USSR as the authors of the anti-satellite weapon project. The current state of the Chinese anti-satellite missile project remains unknown and therefore is cause for concern.

China, starting new projects in one area or another, constantly demonstrates its determination and readiness to go to the end. This feature of Chinese projects, combined with the ideological motives and general intentions of the country to become a superpower, leads a considerable number of experts to not very happy and positive conclusions. One of the consequences, including the Chinese, of activity in space was the European work on the creation of a “Code of Conduct in Outer Space”. In November-December, under the auspices of the European Union, a regular meeting of specialists from several countries will be held, who will discuss the current version of the draft Code and make the necessary adjustments to it.

The new international treaty should become a tool for regulating certain aspects of the use of outer space. First of all, it will affect military projects. In addition, it is planned to resolve the situation with space debris and create general recommendations for the disposal of spacecraft that have exhausted their resources. The last account has been hundreds over the past, and the number of various small fragments and fragments almost cannot be accurately counted. The “Code of Conduct in Outer Space” will not immediately get rid of existing problems, but is expected to reduce the increase in the amount of space debris, and then contribute to cleaning the orbits.

Whether China will join the new agreement and abide by its terms is too early to say. The new Code currently exists only in the form of a draft and it will take at least months, if not years, to prepare it. During this time, Chinese scientists and engineers can complete several new programs related to space exploration. Among them may be those who will have to close after signing the contract, which, under certain circumstances, will affect the very possibility of entering into an international treaty.

However, the conditions and peculiarities of the application of the Code, as well as the list of countries participating in this agreement, are questionable. In this regard, it remains to operate only the available information. Disregarding foreign concerns, China continues to implement its plans in the space industry. Probably, he is already engaged in military projects, and these projects concern not only satellite intelligence, etc. tasks.

To date, China is fighting for third place in the global space "hierarchy." Its main competitor in this business is the European Union. In this case, as follows from some of the features of the Chinese space program, the official Beijing does not intend to compete with the European space program. His goal is to catch up and overtake the leading countries in the face of the United States and Russia. Therefore, in the foreseeable future, China will continue to publish reports of its new successes and reduce the backlog of industry leaders, simultaneously making foreign specialists nervous.