5 September 2013
24
Talk about the need to develop the Far East as one of the strategic regions of the country has recently become systematic. The fact that the Far East needs support, that it needs to be made attractive to investors, that it is time to build large enterprises and infrastructure facilities is said by everyone - from ordinary residents of the Far East itself to federal officials. However, speaking and doing is still not the same thing, and in order to move from words to real activities, one sometimes has to sweat a lot. 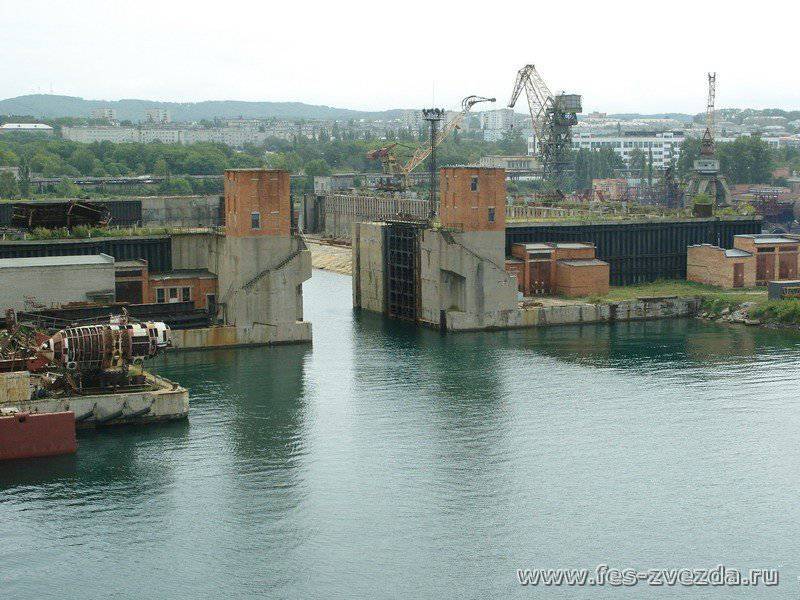 One such effort is currently being undertaken by the Russian government. This is a full-scale construction of the Zvezda plant in the Far Eastern Federal District. Today, Zvezda is a large ship repair yard that specializes in the repair of submarines of various modifications, including nuclear submarines. By the way, "Star" in the Far East - today it is generally the only company that is engaged in repair work on submarine missile carriers.

At the current stage, there are plans to turn the Zvezda Shipyard into a large civilian shipyard, where ships necessary for the development of the Arctic shelf will be created. The plans also mean the simultaneous transformation of this shipyard into the largest civil shipbuilding plant in Russia.

At the same time, everybody understands perfectly well that the construction of ships for the domestic oil industry is an occupation that ultimately will become, of course, profitable, and, moreover, strategically important in the context of increasingly sharper disputes over the natural resources of the Arctic. But, despite such a comprehensive understanding, the construction of the Zvezda Shipyard cannot start at full scale. Russian Deputy Prime Minister Dmitry Rogozin announced a 14 month delay, and made it clear that delaying the deadlines could lead to a loss of competitiveness in the market of large-tonnage vessels and mining platforms.

It is noteworthy that until quite recently the government was not going to finance the construction of a civil shipyard "Star". The rate was made on foreign investors. At the same time, the hope of financing the project from foreign partners gave a certain oddity. The strangeness lies in the fact that the expectations of the Russian government concerned South Korea, while the South Koreans themselves almost casually mentioned that they were not opposed to taking part in the construction of the new Zvezda. For these words of the Koreans “by the way”, the government for some reason jumped on it, announcing in advance that the project would not be financed from the state budget. Like, Koreans will pull out the whole project on themselves.

But everything turned out differently. Koreans for some reason decided to take their words back and said that they would not take part in the construction in the form they were offered. Of course! - who wants to carry on a multi-billion dollar project, the economic benefits from which will not go into his pocket ... Perhaps, Seoul has calculated in advance that helping in the construction of civilian ships for the oil industry will make it possible only at the first stage to make a profit, but in the end will hit the competitiveness of Korea itself in the shipbuilding market. Whatever it was, but the Russian government again had to turn to the topic of financing from the state budget of major construction projects that is unpopular today.

Began to count. And after the calculations, they came to the conclusion that the project to build the largest shipyard in Russia would require at least 560 billion rubles, of which the state, in case of participation, will have to spread about 100-110 billion. More 150 billion. planned to take the National Welfare Fund.

The sums are considerable. But such costs should be more than justified. The reason is that Russian oil and gas companies are planning to order production platforms and ships to transport hydrocarbons for a total of 6,5 trillion rubles over the next 7 years. If we also take into account the revenues that the state treasury will receive after the start of using these vessels transporting oil and gas to consumers (including foreign ones), then the prospect of Zvezda for the state and the Far Eastern region becomes obvious.
But after all, the money from the beginning of the work of the civil “Star” will come to the budget, according to the boldest forecasts, no earlier than in 3-4 of the year. And a large proportion of 100 billions needs to be invested right now. This worries the government, and concerns are mainly associated with the low growth of the Russian economy.

In order to get the situation off the ground, it was decided that the state would start investing in a major construction project, but after certain perturbations. As without them ... Dmitry Rogozin said that the government has plans to create a corporation of large shipbuilders, in which USC (United Shipbuilding Corporation) will be only a part. The part for USC is determined at the level of the so-called blocking stake - 25% of the shares of one share. The remaining shares are distributed among private investors, which may be Gazprombank and even, possibly, General Electric. The main thing is that all these private investors should not actually be the same investors as the South Koreans mentioned above ...

A number of experts expressed doubt about the need to make a garden in the form of creating another shipbuilding corporation in the form of a whole consortium, but Rogozin himself tried to dispel these doubts. According to him, this option will certainly benefit civil shipbuilding, which we have great difficulties and can not compete with foreign "partners". The benefit, according to the vice-premier, for civil shipbuilders will be that, thanks to a new powerful corporation, it will be possible to use the defense order for the implementation of strategically important civilian projects. One of such projects can be the same shipyard "Star", the construction of which must be completed before 2020 year.

Such major companies as Gazprom and Rosneft are named as the main customers for the new shipyard products. Interested in buying new ships Sovcomflot, Primorsk Shipping Company and a number of other companies. The greatest interest of customers is caused by tankers, oil and gas production platforms, vessels for transporting liquefied gas, the construction of which is only in the plans so far.

If the renewed Zvezda enterprise in the Far East starts its work, then this will open up about 10 thousands of jobs. And many of these jobs, as is now fashionable to say, are high-tech. Obviously, the level of wages at this enterprise should become considerable, considering what kind of equipment is planned to be created here. The only thing that grieves the people responsible for the project implementation so far is that the products of Zvezda at the first stage are unlikely to compete with similar products of Japanese and South Korean production in quality and Chinese ones at the price on the world market.

But in order to make it all up, you need, first, to start implementing the project, and, second, you will have to make an extra effort and find a golden combination of quality and price while taking into account the interests of both producers and buyers. Complicated? Well, in any case, not without difficulties.