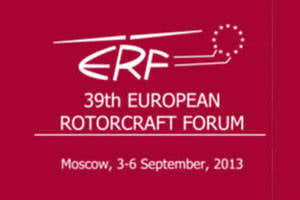 On September 3, the 39 European Helicopter Forum (ERF - European Rotorcraft Forum) began its work in Moscow. From 3 to 6 September, specialists representing various scientific and design organizations from several European countries will analyze the current state of European and global helicopter engineering, as well as discuss its prospects. The organizer of the international forum was the Russian Helicopters holding.


Despite the fact that only about 250 specialists participate in the ERF forum (by orders of magnitude less than in the MAKS 2013 show last week), this event can have the greatest impact on the further development of the relevant sector aviation industry. Since 1975, the European Helicopter Forums have been helping experts from different countries exchange views, discuss current issues and come to common solutions. Every year, the ERF forum takes place on a new venue, and this year the Moscow Mariott Grand Hotel became the venue for the event.

During all four days of the forum, most of the time is devoted to meetings, conferences, etc. activity. In addition, some events of a different kind are planned. So, on Friday, September 6, ERF delegates will travel to Tomilino, where they will visit the Moscow Helicopter Plant. M.L. Mile and the Russian-Italian joint venture HeliVert. There, forum participants will be able to familiarize themselves with the state of affairs in the Russian helicopter industry and learn about the success of the joint venture created for the construction of Italian AgustaWestland AW139 helicopters in Russian territory.

During the conferences and round tables, experts from European countries will discuss the development of materials science and instrumentation, operation and safety, as well as a number of other important topics. As the experience of recent decades shows, the ERF forum has proven to be useful for coordinating action and joint development of European helicopter industry. For nearly four decades, the European Rotorcraft Forum helped European aircraft building organizations exchange experience and discuss current issues. In the future, the large role of this forum will remain, it will also have a great impact on the industry.

According to A. Samusenko, Advisor to the General Director of the Russian Helicopters holding, in recent years, interest in helicopters has increased significantly, due to numerous geopolitical changes, local conflicts and events in the global economy. In connection with all this, the demand for helicopter technology has significantly increased. As a result, the European Helicopter Forum held in Moscow will help determine the future development of helicopter engineering and the main trends in the creation of new or modernization of old projects.

According to A. Samusenko, currently in the development of the helicopter industry, there are three main trends: increasing safety of flights, reducing the cost of operating equipment and improving the capabilities of helicopters, including the provision of operation in any geographic conditions and at any time of day. In accordance with these trends, at present, all the leading helicopter-building enterprises are shaping the appearance of promising machines and improving existing ones.

It is worth noting that Russian helicopter builders, like their foreign counterparts, are trying to follow the needs of the international market, although they are a little behind in this. At a recent meeting on the problems of helicopter, held in Rostov-on-Don, industry leaders and the country came to the conclusion about the need for the active development of one of the directions. The Russian aviation industry, having great success in the field of heavy and medium helicopter building, lags significantly behind the construction of light helicopters. The Russian Helicopters holding company was assigned the task of intensifying work on creating light multi-purpose helicopters with take-off weight within 2,5-4,5 tons. Probably, during the current ERF forum, Russian helicopter builders will be able to consult with foreign colleagues who have much more experience in the field of light helicopters.

Another topic where productive cooperation between Russian and foreign scientists and designers is also possible is the creation of high-speed helicopters. As expected, the ERF will raise the question of the appearance of a promising helicopter capable of flying at speeds inaccessible to modern machines. Due to a number of features of aerodynamics, helicopters of classical schemes cannot accelerate to speeds over 350 kilometers per hour. There are several projects abroad and in our country that offer solutions to this problem, but they have not yet left the stage of theoretical research and testing of experimental aircraft. It is quite possible that the 39-th forum of ERF will allow European helicopter-building enterprises to finally find a solution to the old problem and together begin the development of a practical high-speed helicopter.

The European Helicopter Forum is closed to the general public, and most of the activities of its program are of interest only to scientists, designers or businessmen. Nevertheless, such a specific, narrowly specialized nature of the forum does not in the least prevent it from being the largest and most important international event in the field of helicopter construction, having the greatest impact on the development of the industry. Perhaps, as a result of the meeting of specialists from several European countries, in the very near future new projects will appear that can change the direction of development of all European, and then the world helicopter industry.