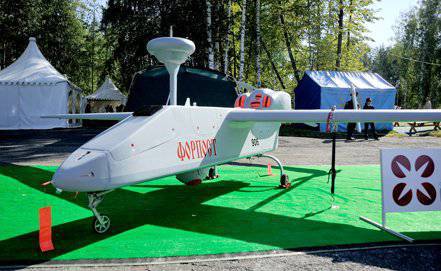 At the Air Force Academy began training specialists in unmanned aviation. This was announced today by ITAR-TASS, the head of the press service of the Western Military District, Colonel Oleg Kochetkov.

“The Air Force Academy’s educational and scientific center for the first time recruited pilotless aviation specialists,” he said. “Already at the end of this year, the first samples of unmanned aerial vehicles will go to university for practical training of cadets. four specialties of management and maintenance of various UAVs, which either come into service or are just being tested. " “The training of these specialists is organized in Voronezh and in the Chelyabinsk branch of the Air Force Academy,” Kochetkov specified.
According to him, "the Russian unmanned aerial vehicle complex Orlan-10, which is used for monitoring facilities in remote areas, as well as for search and rescue activities, will go to the academy." At the beginning of 2014, the arrival of the Forpost unmanned aerial vehicle used for aerial reconnaissance is expected. In the future, the number of incoming aviation equipment will increase.
Now the cadets of the 1 course of the Air Force Academy are completing their initial military training. On Saturday, a ritual of swearing in students will be held on the main square of Voronezh. It will take about 1000 freshmen.