The fall of Syria - the end of Christianity in the Middle East?

In the coming days, the United States is about to launch a military operation in Syria. The preparation of the world community for another US aggression, which lasted two years, has come to its logical conclusion. So far, things haven’t even reached the contingent landing - the United States does not like to get involved in land operations, and this time the role of the American Marines is played by fundamentalists from around the world. But to put rocket and aviation the American president is ready for attacks on a sovereign country and announced his plans to the whole world, openly spitting in the face of Russia, China and some other states that sharply opposed the military operation in the country.


What will happen to Syria? According to UN Secretary-General Ban Ki-moon, two million people have left the country. For the twenty millionth Syria, this is not so little - in fact, every tenth Syrian preferred to a foreign land of probable death in his own country in flames of revolt. Of course, the Americans and their satellites distort, claiming that the majority of refugees leave the country due to the actions of the Assad regime.
Against the background of the Saudi kings, Qatari emirs and other medieval allies of the “enlightened West”, Bashar Asad looks like a great humanist. If he had not been such, he would have destroyed the opposition still in its infancy, before the deadly virus had spread throughout the country. As a result of the actions of the gangs of the rebels, correctly called by the European Tolerasts “rebels”, more than 100 thousands of people died. And this is only according to official data of the United Nations. And this is before the start of rocket and air strikes on Syria by the United States and its allies.

For Russia, Syria is not just another Middle Eastern country, a fragment of the former friendship of the Soviet Union with the "progressive regimes" of Asia and Africa. Syria is the most important historical Russia's partner in the Middle East. There are many Christian shrines in this country, several million Christians live, including followers of the Antioch Orthodox Church. From the very beginning of the history of Christianity, the Syrian lands played a crucial role for him. For Christians around the world, Syria is holy. Here the future apostle Paul turned to Christ, the church of John the Baptist was built in 391, parts of the remains of John the Baptist are also buried here. In general, the Christian shrines of Syria can be listed endlessly, in the same way, as well as the names of holy ascetics and Christian thinkers associated with this country. 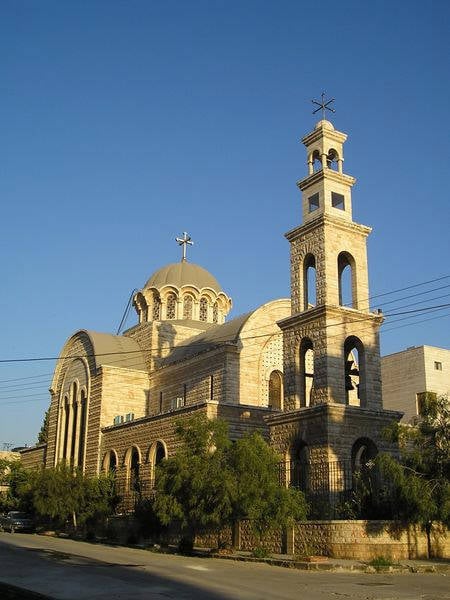 For the Syrian Orthodox, fanatics from Al-Qaida, supported by the American military and European tolerasts, will in fact mean two possible options for further development of events - either a physical death as a result of the genocide, or a swift exodus. With the advent of extremists, the history of Christianity in Syria will end. And that means - the end of the two thousand years existence of Christian churches in the entire Middle East will come.

Against the background of the Egyptian Coptic genocide, the events in Syria, the ousting of Christians from Iraq, the same fate will befall the Lebanese Maronites. Neither the Arab caliphs, nor the Seljuk and Ottoman sultans succeeded in completely destroying Christianity in the Middle East region, but the militants of extremist organizations, directed by the US hand, will succeed. It will succeed if the Assad regime falls - the last stronghold of secularism and religious tolerance in the Arab East (little Lebanon will inevitably suffer the sad fate immediately after the fall of Syria).

And what about the Europeans? The French, the British, the Germans, the Italians? After all, the blessed Levantine lands - Syria and Lebanon - from ancient times were part of the interests of Europe. Crusaders fought here, Christian states were created by knightly orders, in the end - some Syrian and Lebanese Christians were in close relations with the Vatican. But modern Europe, as practice shows, is rather an enemy than a friend of a truly Christian world. Countries in which homosexuals are crowned, and lesbians become clergymen, countries that support al Qaeda against the secular governments of Egypt, Libya or Syria, and even against Christians - Egyptian Copts or Syrian Orthodox and Melkites - no longer have the moral right to represent Christian civilization . The West did away with its Christianity by agreeing to participate in the plans of the non-Christian, again, the world financial elite, these crocodiles stuffed with dollars, to establish the “new world order” by the hands of the backward and spooked residents of Asian and African countries.

The Patriarch of the Melkite Catholic Church, Gregory III Laham, speaking in Damascus, stressed that the United States and European countries did not do absolutely nothing to stop the wave of violence from extremist Al-Qaeda. The hierarch described the upcoming attack on the country as a crime that would entail colossal casualties. Melkity is a Greek Catholic church that adheres to the Byzantine rite, but broke away from the Antioch Orthodox Church in the XVIII century and concluded a union with the Vatican. However, the western “public” doesn’t care deeply about the Uniates, who once believed that Catholic Europe could protect them from aggressive neighbors. It is the Christians that currently constitute a significant part of the refugees from war-torn Syria.

Finally, a significant number of our compatriots also live in Syria, primarily women, who at various times married Syrians who studied in Soviet and Russian universities. Such inter-ethnic marriages have always been many and today these Syrians of Russian, Ukrainian, Belarusian origin and their children and husbands are also facing a mortal threat.

The Christian population of Syria is a potential victim of genocide by al-Qaida and other radicals. In fact, giving Christian Syria to Islamists is the same as giving the Jewish population of the Eastern European towns seventy years ago to the Nazis. Christians in Syria in the event of victory of the Islamists will no longer be. And in this context, the great mission of protecting the Christian religion in the Middle East rests on Russia. Not for the sake of Assad and the Alawites, not even for Russia's strategic interests in the Middle East region, economic ties with Syria, but for the life of Christian brothers, whether they are Orthodox or Greek Catholics, Russia should intervene more actively in the Syrian conflict. your insidious project of redrawing the political map of the Middle East with the hands of frostbitten mercenaries and extremists.

Many sins will be forgiven to Vladimir Putin and his associates if they find the courage to resolutely come out in defense of Syria and take all possible measures to stop the aggression of the United States and its allies against a sovereign state. Moreover, Russia will be next for Syria - only the blind can not see it. After all, the intentional incitement of ethnic hatred in our country, focusing on alleged violations of the rights of homosexuals, flooding the country with migrants is quite a favorable situation for the implementation of US plans to destroy Russia as a sovereign and united state.

Once the patriarch of Antioch made an appeal to Christians around the world to support the Soviet Union in the great war against the Nazis. In the monasteries and temples of Syria and Lebanon, prayers were raised for the granting of victory over the occupiers. Does Russia have the right today to leave these people and this blessed land in terrible trouble?

The fall of Syria will mean not only the death of the ancient Christian tradition in the Middle East region - to some extent this will be a milestone in Russia's final loss of its position as a world power, the Orthodox Christians of the whole world have always counted on the help and protection of it. To save Syria is to save Russia.

Ctrl Enter
Noticed oshЫbku Highlight text and press. Ctrl + Enter
We are
Interview by President Bashar Al-Assad to the Sunday TimesWho will be the next victim of destabilization in the Middle East?
Military Reviewin Yandex News
Military Reviewin Google News
87 comments
Information
Dear reader, to leave comments on the publication, you must to register.