US Spy Empire: Difficult Objects, Impossible Objectives, and Critical Gaps in US Intelligence

5 September 2013
11
29 August 2013, the American edition of the Washington Post came up with material on the first page about the secret budget of the US intelligence. The publication is based on documents received by the publication from the former CIA officer Edward Snowden. Now on the site of the publication there is a top-secret document dated February 2012 of the year - "Budgetary justification of the national intelligence program for the Congress" Tom. 1. (FY Congressional Budget Justification) from 17 slides. (1) Another post in the Washington Post reports information from the 178 page document about the secret budget of the American intelligence community and analyzes the information it contains. (2) material. (3) (4) 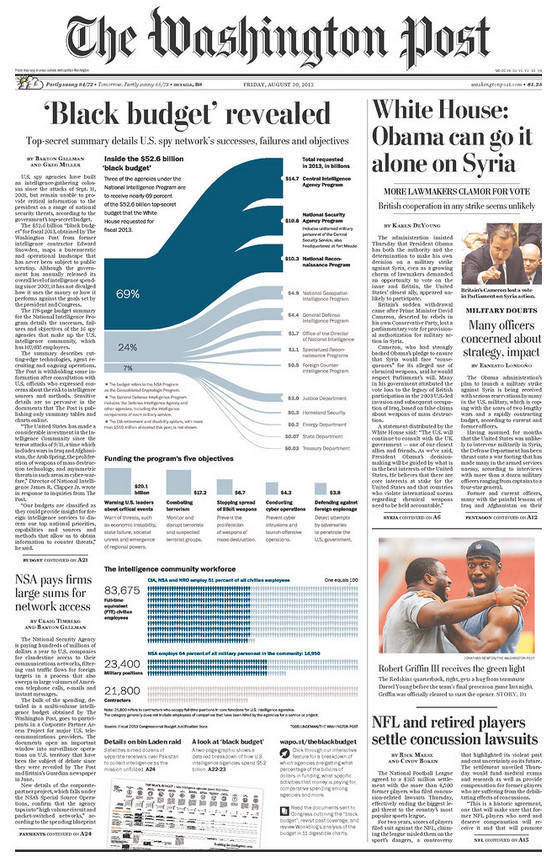 A secret document published by the Washington Post provides insight into the structure of the US intelligence community created after 2001, and its areas of activity. The document testifies to the close integration of US intelligence agencies - the CIA, the NSA (National Security Agency), and others under the unified management of the Directorate of the Intelligence Community. 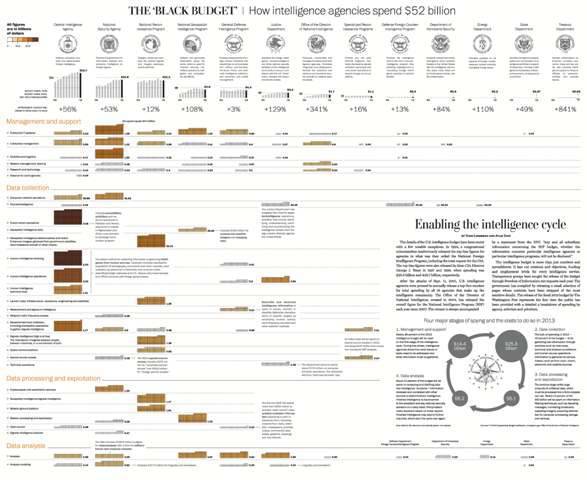 The budget is distributed not only between individual organizations — the CIA, the NSA, and others — but also under individual special programs in which intelligence organizations are involved individually or jointly. It is significant that the US intelligence community has one pension fund, which is listed by the CIA.

Total US intelligence community includes 16 organizations. (5) Next, we list them with the amount of funding in 2013 year:

It can be concluded that the published document does not provide complete information about the financing of US intelligence. The published secret budget lists funding for 7 intelligence organizations and 5 intelligence programs. Apparently, the independent military intelligence services are funded, both under the secret budget under the General Defense Intelligence Program article, and from the budget articles of the US military - the Pentagon. In addition, on the basis of the published document, it can be concluded that the FBI receives only a portion of the money from the programs in which it is involved from the said budget. In addition, the FBI has its own budget. This kind of organization of the budget and the budgets of the intelligence community and its individual organizations makes it possible to hide expenses in certain areas of the activities of American intelligence services.

- the warning of the leaders of the United States "about critical events" - $ 20,1 billion;

Thus, of the total budget of the American intelligence community of $ 52,6 billion: 39% is intended for "strategic intelligence and forecasting", 33% - for fighting "violent extremism", 13% - for "nonproliferation of weapons", 8% - "improving cybersecurity", 7% - to "integrated counterintelligence."

Financing by another criterion - individual programs are as follows:

12) Specialized Observation Intelligence Program (SRP) - a joint CIA and NSA program engaged abroad through embassies to penetrate into the local communication networks (SCS) and intercept all sorts of signals from other people's communications - 2%;

13) Department of State Bureau of Intelligence and Research - 1%;

14) The Treasury Department, which is engaged in intelligence activity regarding the financial sources of terrorist organizations, money laundering - 1%.

A separate diagram in the presentation illustrates consolidated CIA programs (CIAP) for articles, from which it becomes known that 78% is spent by the CIA for collecting information and operations and only 7% for analytics.

A separate diagram illustrates the articles of the Consolidated Cryptology Program (CCP), from which it becomes known that the 23% of the funds of this program of the NSA is spent on collecting information and operations, and the 14% on its analysis. The NSA CCP program takes a lot of money for technical equipment, equipment operation and management.

In the National Intelligence Program via satellite observation (NRP), 59% is spent on information gathering and collection operations, and 24% is on the technical process and equipment operation. Analysis of the information received in the framework of this program is not performed. Large increases in satellite intelligence are not envisaged. The point here is already on the well-established track.

As for the expenses of the Office of the Director of National Intelligence (ODNI), only 3% of its funds are spent on analyzing information. From this it becomes obvious that the main analytical centers that supply information to the Directorate work within the framework of the CIA and the NSA.

The published presentation reports the growth of the budget of the American intelligence community from 2004 to 2013 financial years for individual departments and programs.

In a separate article highlighted the knowledge of the languages ​​of "special interest" - just 509 people. This group includes: Tagalog (Philippines) - 62; Indonesian - 48; Hindi - 73; Somali - 5; Pashto - 88; Dari - 96; Urdu - 89; Punjabi - 45, Hausa (Chad) - 3. Here, as we see, in the “special interest” zone of American intelligence, Oriental languages ​​are listed. From the aforementioned published statistics, it is impossible to determine the number of employees of the American intelligence community who speak fluent foreign languages, since one employee can perfectly speak not only one, but two or more foreign languages, for which he can be rewarded. However, a general idea of ​​the areas of "linguistic" interest in comparison can be made up.

The content of the secret budget of the American intelligence community of the Washington Post makes a number of significant conclusions. (2)

After 2001, the United States in ten years spent an additional $ 500 billion on exploration. The secret US intelligence budget for 2013 is twice that in 2001, and 25% more than in 2006. As a result, spending on the intelligence community in the United States caught up or slightly exceeded the level of spending of the Cold War era. Taking into account the purchasing power of the US currency, experts estimate the total US intelligence budget for the end of 1980's at $ 71 billion. Now, apart from the secret budget of $ 52,6 billion in the intelligence community, Americans spend another $ 23 billion on the Pentagon’s budget intelligence programs.

In its current activities, the US intelligence community has an active professional interest in both the "friends" and the "enemies" of the United States. The main objects of US strategic intelligence and counterintelligence operations are in order of priority: China, Russia, Iran, Cuba and Israel. The governments of Iran, China and Russia qualify as difficult targets for entry. However, North Korea is generally opaque to American espionage. There are five “critical” problems in Pyongyang’s nuclear and missile programs for American intelligence, and analysts know virtually nothing about the North Korean leader’s intentions. In addition, Pakistan is defined as an "indestructible target."

The Washington Post states that the secret budget is evidence: the US reconnaissance colossus created after the September 11 attacks of September 2001 still cannot provide critical information to the president on a range of threats to national security. The American intelligence community sees critical breaches: in Hezbollah in the Middle East, Pakistan’s nuclear program, work in China on the 5 generation of fighters, in the possible response of Russian leaders to "potentially destabilizing events in Moscow, such as mass protests and terrorist attacks ". The object of special interest of Americans is the work abroad on biological and chemical weapons. Among the priority tasks of American intelligence are "possible countermeasures of Russians against chemical weapons" and the assessment of security measures at biological and chemical laboratories of Pakistan. The North Korean nuclear program is also identified in the list of priority targets of the American intelligence community.

After 2001, the US intelligence agencies remain focused on fighting terrorism, as a serious threat to US national security. A third of intelligence spending goes in this direction. Recent advances: The CIA launched new biometric sensors to identify the identity and location of the terrorists used in the campaign of attacks by the CIA drones in the Middle East.

Currently, the US intelligence community is particularly frightened by the prospect of the emergence of "home-grown" terrorists in the country who are planning and carrying out terrorist attacks in the United States without direct support or instructions from abroad. As a similar situation point to the terrorist act of the Tsarnaev brothers in Boston. However, the problem was formulated a year before the explosions in Boston, as one of the "most difficult gaps for exploration." Thus, the terrorist act in Boston was a confirmation of previous predictions. Last year, the US National Counter-Terrorism Center drew dozens of analysts from various institutions to determine "indicators" to identify such potential terrorists. The FBI, in turn, received additional funding to increase the number of its employees, who secretly track the activity of “jihadists” in the Internet.

The published secret budget shows that the United States continues to give priority to technical intelligence. The CIA allocates $ 1,7 billion, or almost 12% of its budget, to a joint program with the NSA CLANSIG, designed to covertly intercept radio and telephone communications "in hostile territory." 35 thou. NSA employees are employed in the so-called. "Consolidated cryptology program", which additionally works on the armed forces. The program provides not only the decoding of someone else's connection, but also the protection of its own codes. The section on North Korea shows that the United States surrounded this country with close technical observation. Special sensors monitor seismic activity, satellites scan the surface of the country in search of construction of new nuclear facilities. US intelligence agencies are seeking to get photographs of objects, air samples and infrared images from North Korea “around the clock”. As for Iran, new methods of observation and technology allowed analysts to identify nuclear facilities that were not detected on satellite images.

In the Washington Post publication it is reported that in Syria, at the beginning of the civil war, the NSA intercepted the communications of the highest military officials of this country. The Syrians later acknowledged their omissions in organizing their communications. As for the Internet, the activity of the NSA in this area has already been sufficiently disclosed by Edward Snowden. The CIA and the NSA made aggressive efforts to break into foreign computer networks to gather information and sabotage what the budget calls “offensive cyber operations.”

The publication of the Washington Post indicates that the sphere of special interest of the NSA is the possible reaction of the Russian government in the event of a terrorist attack in Moscow.

Long before the incident with Snowden, the leadership of the US intelligence community was concerned about the "behavior" of employees and contractors who have access to classified materials. The NSA plans this year to check the admission of 4 to thousands of employees to prevent possible leaks. The published secret budget includes a special section on financing a counter-intelligence program designed to protect against the danger posed by foreign intelligence services, as well as to prevent treachery in the ranks of its own.

In the 2012 year, significant efforts were made in this area to combat WikiLeaks leaks. However, in 2013, Snowden managed to rewrite thousands of secret documents before the NSA launched a special internal security program.

Ctrl Enter
Noticed oshЫbku Highlight text and press. Ctrl + Enter
We are
The final point in the operation of the CIA: how Western intelligence services promoted "Doctor Zhivago"Cloudy future in American. Informatization in the service of intelligence
Military Reviewin Yandex News
Military Reviewin Google News
11 comments
Information
Dear reader, to leave comments on the publication, you must to register.