Armenia goes to Customs and Eurasian unions: political decision is made 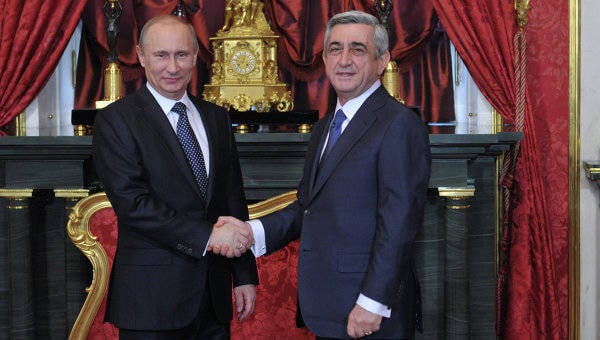 Armenian President Serzh Sargsyan announced the decision of the republic to join the Customs Union and take the necessary practical steps for these purposes, and subsequently participate in the formation of the Eurasian Economic Union. The corresponding wording is contained in the official joint statement on the results of the talks between the presidents of the Russian Federation and Armenia. In turn, as stated in the statement, Vladimir Putin supported this decision of the Republic of Armenia and expressed the readiness of the Russian side to “fully facilitate this process.”


On the eve of the meeting, 2 of September, Assistant to the President of Russia Yury Ushakov announced that the heads of state will discuss cooperation in the political, trade, economic, energy and humanitarian spheres, but most importantly - the development of integration processes in the CIS space: prospects for Armenia’s interaction with the Customs Union and the Common Economic Space as well as current issues of multilateral cooperation within the CSTO.

At the beginning of the meeting with Putin, Sargsyan confirmed that he came to Moscow, because “there are issues that need to be resolved - so that our relations can rise to a new, higher level”:

“Our relations, the relations of Armenia and Russia, are built on the age-old traditions of friendship and fraternity between the peoples of our countries ... I am convinced that every generation of Armenians and Russians should contribute to history of this relationship. We value these relationships and will do everything to ensure that they develop. This is an absolute priority for us. ”

In the second document, the heads of state "noted with satisfaction the positive dynamics of interaction between Russia and Armenia in the political, trade-economic, cultural-humanitarian, military and military-political fields."

In addition, the sides expressed readiness for the practical implementation of existing bilateral projects aimed at modernizing and diversifying the Armenian economy and strengthening the republic’s energy security:

- to extend the life of the existing Armenian NPP, as well as the project to build a new nuclear power plant.

- an agreement was reached on the issue of energy supplies from Russia to Armenia.

Also, the heads of Russia and Armenia emphasized the importance of continuing joint efforts aimed at implementing infrastructure projects, including railway communication, as well as the construction of new logistics and communication routes. And these are not just words - according to information sounded at the talks, it has already been decided that the estimated investments of Russian Railways in the development of the Armenian railway network will be about 15 billion rubles.

“Russia and Armenia made a political decision on Armenia’s joining the CU,” said Sergey Lavrov, head of the Russian Foreign Ministry, in a press commentary. According to the Minister of Foreign Affairs, the procedures that exist in the Customs Union now come into force - an appeal to the leadership of the three founding states of the Customs Union, to the Eurasian Economic Commission:

“This is already a subject of negotiations, quite technical. But the political decision was made ... We hope that it will be supported by all members of the Customs Union. ”

Commenting on the agreements reached, Vladimir Putin emphasized that connecting Yerevan to the Eurasian integration structures would give a powerful impetus to mutually beneficial economic cooperation. The President noted that Russia is the leading trading partner of Armenia, recalling that in January-May of the current year, the trade turnover increased by 13% compared to the same period of 2012 of the year. According to the head of state, high rates were achieved in the investment sphere, the volume of accumulated Russian investments exceeded 3 billion, which is almost half of all foreign investments in the Armenian economy.