Interview Bashar Assad: Why the only way to stop the terrorists - the elimination 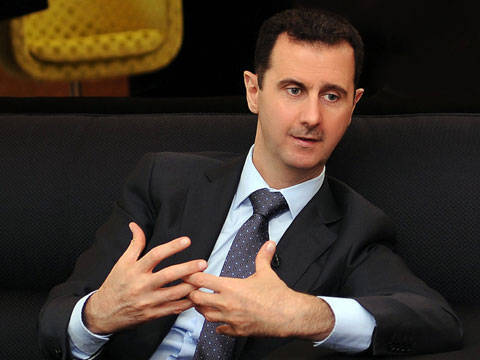 The French edition of LeFigaro published an exclusive interview with the head of Syria, Bashar Assad, where he expressed his point of view on what is happening in Syria and the region. According to him, the current government is absurd to blame chemical attacks, because it is not at all interested in them, and Barack Obama is weak because the strong are trying to avoid war. “However,” publishes an abbreviated text of the interview.


- Give evidence that your army did not use chemical weapons 21 August in the suburbs of Damascus.

“The evidence must be presented by the prosecutor.” For our part, we responded to the accusations, although Obama and France just could not prove anything - including their own people. But let's try to find the logic in their statements. Are we interested in the use of chemical weapons, whereas our disposition is much better than last year? Why should any state’s army use weapons of mass destruction when it can avoid it? I do not claim that the Syrian army possesses such weapons or, on the contrary, does not possess. But let's assume that the Syrian army uses weapons of mass destruction, and it does it where its positions are, where its soldiers can be hit by these weapons, as the UN inspectors stated. Where is the logic? In addition, why use weapons of mass destruction in the suburbs of Damascus, because gas can be attributed to the wind - and tens of thousands of people will die? In addition, all the allegations become void when you see the bullying and torture perpetrated on the Internet by the terrorists.

- The United States claims to have intercepted a telephone conversation by a Syrian high-ranking official who acknowledges the use of chemical weapons. What do you think about that?

“If the Americans, the French, or the British had at least one piece of evidence, they would have presented it immediately.”

- Is it possible that the decision on the use of chemical weapons was made without your knowledge?

- We never claimed that we have chemical weapons. Your question hints at things I didn’t say, and which official Syria neither confirmed nor denied. But in general in countries that possess such weapons, the central authority takes the decision to use them.

- Barack Obama has decided not to inflict military strikes on Syria. How do you interpret this decision?

- Due to the fact that he threatened to start a war against Syria, some saw him as a strong head of a strong state. But we believe that a strong person is the one who interferes with the war, and not the one who contributes to it. If Obama were strong, he would have publicly declared: “We have no evidence on the use of chemical weapons by Syria.” He would say: “The only way to find out is to investigate the UN. Let's provide a clarification of this issue to the Security Council. ” But Obama is weak; he succumbed to pressure from within the United States.

- What would you say to the members of the US Congress, who must decide whether to deliver military strikes on your country?

“Whoever makes this decision, he must first ask what the recent wars of the United States or Europe have brought. What did the western world gain from the war in Libya? What did he gain from the war in Iraq and in other countries? What will he gain from further destabilization in Syria? The task of any member of the Congress is to work in the interests of his country. What will the US gain from increased instability and extremism in the Middle East? What is the purpose of the American parliamentarians, if they want to continue what George W. Bush began, that is, to increase the military threat in the world?

- What is your vision of the situation? How are you going to answer?

- The Middle East is a powder keg, and the wick is already smoldering. Here we must speak not only about how we can respond, but also about what can happen after the first jolt. And what happens, nobody knows. The world will lose control of the situation when the powder keg explodes. Chaos and extremism will spread. There is a serious risk of war in the region.

“What can you tell Jordan where the rebel training camps are located?”

- Jordan has already announced that it will not serve as a basis for the preparation of a military operation against Syria. But if we cannot eradicate terrorism in our country, it will naturally spread to other countries.

- Therefore, are you afraid for Jordan and Turkey?

- We have talked about this repeatedly. Jordan is aware of the danger, despite the pressure it is subjected to, to remain a training place for terrorists. As for Erdogan, I do not think that he even understands what he is doing.

- What is the reaction of your allies, Hezbollah and Iran?

- I do not want to speak for them. Their statements are quite clear. The interests of Syria, Iran and Hezbollah are the same, but the stability of the region today depends on the situation in Syria.

- What needs to be done to stop the bloodshed in Syria?

- At first, this decision could be found in the course of the dialogue, to be the result of political measures. But today the situation is different. We are fighting terrorists, and 80 – 90% of our opponents belong to al-Qaeda. They are not interested in either reform or politics. The only way to stop them - the elimination. Only then can we return to talking about political measures. It is necessary to block the way for terrorists to cross the borders of Syria, stop supplying them with weapons, provide financial support, as Saudi Arabia, Turkey, Jordan, France, the United Kingdom and the United States continue to do.

- Are you ready to sit down at the negotiating table with representatives of the rebels, to provide them with security guarantees?

- Last year, in January, we launched such an initiative. By the way, the opposition you are talking about is “made” abroad, it is alien to Syria. This opposition is made in France, made in Qatar and only last of all - made in Syria. She defends the interests of those who created it. Accordingly, members of this opposition could not accept our proposals for resolving the crisis.

- Has France become the enemy of Syria?

- The one who contributes to the financial and military strengthening of terrorists is the enemy of the Syrian people. The one who contradicts the interests of Syria and its citizens is the enemy. The French people are not our enemy, but French policy is hostile to the Syrian people. And as long as the situation does not change, France will be his enemy. This hostility will end when France changes its political course. The consequences, of course, will be that will affect the interests of France.

“How long are you ready to fight?”

“We have two options: fight and defend our country from terrorism or capitulate.” When it comes to patriotism, any country will fight, anyone is ready to sacrifice themselves for their homeland. There is no difference in this issue between the president and the citizen.

- What has changed in the character of Bashar Assad, who replaced his father in 2000, and the current president of Syria, who is now ready to use violence?

- My image is distorted by the media. I am still a person belonging to the Syrian people. I protect his interests. I am independent, although I am under pressure from outside. West deceived me. You thought that you could dictate to the young president of Syria what he should do. You thought that if I studied in the West, you lost your true culture. This is a naive and superficial view of things. I have not changed.

Ctrl Enter
Noticed oshЫbku Highlight text and press. Ctrl + Enter
We are
What you didn't want to know about EnglandInterview by President Bashar Al-Assad to the Sunday Times
68 comments
Information
Dear reader, to leave comments on the publication, you must to register.