Ukraine: an attempt to sit on two chairs 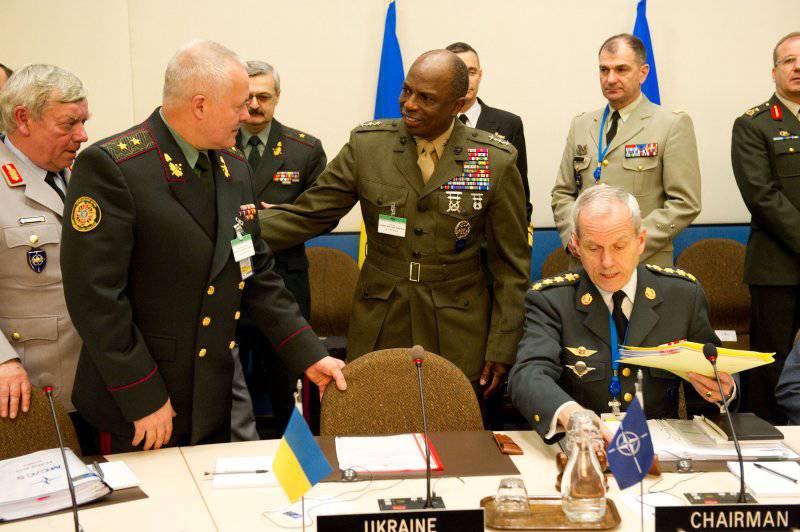 The geographical location of Ukraine on the world map is reflected in most political decisions of the leadership of this country. Ukraine is at the crossroads of the “Europe-Russia” paths; therefore, it practically constantly faces the choice of the vector of its development.

The best way for Ukraine to adapt to life in the new conditions would be to establish fruitful cooperation with both Russia and the former countries of the Soviet bloc, and members of the European Union. But objectively, the situation is far from optimal. And there are many reasons for this.

One of them is the presence of anti-NATO sentiments among the majority of Ukrainians. Citizens of the country understand that the country's entry into NATO will force them to participate in all operations of a fairly aggressive military bloc, including those carried out against the independent states of the world. Even the cooperation with Europeans that took place during joint anti-piracy operations, participation in peacekeeping missions and counter-terrorism exercises, according to many observers, showed that the Ukrainian army is not of interest to NATO members. Moreover, the European Union does not need it at all.

Based on the arguments of analysts, it seems that the joint programs proposed by Europeans to Ukraine are aimed at the destruction of Ukrainian military force. In the first place in these programs is the question of the destruction of existing weapons and military equipment of Ukraine. Kiev under pressure from Europeans and the United States took part in the Partnership for Peace program. As a result of its implementation, Ukraine destroyed the Tu-22 bomber bombers (by the way, Russia modernized the Tu-22, leaving them in service). According to the program "Nunn-Lugar" Ukraine has been recycled Tu-160 "White Swan" aircraft. The same fate befell the Ukrainian missile systems 9K72, small arms and MANPADS. And all this happened for the money of the USA, which is already ready to carry out the most expensive purchase of weapons for the American army, namely the newest F-35 fighter jets.

However, the biggest and most unexpected blow for the Ukrainian army was the proposal of NATO to send for remelting Tanks T-64 If we take into account that 686 tanks of which 600 are T-64 units are in service with the Ukrainian army, it becomes clear that, having carried out this initiative of the West, the Ukrainian army will lose almost the entire fleet of tanks in service. The remaining 86 are 10 T-84U (Oplot) and 76 T-64BM (Bulat).

It should be noted that at present, Ukraine has T-1600 tanks on its bases near 64, the cost of which modernization (based on T-64 it is possible to create BMPT-64 and T64Е) are minor, and after reconstruction they can not only be put into service with the Ukrainian army, but also sell abroad. Therefore, the NATO initiative looks like an arrogant mockery of the country's army, which is already in the most difficult economic and political situation.

The question arises, why is NATO interested in joining a weakened Ukraine in the North Atlantic bloc? Most likely, it is the territory of Ukraine that is of interest to NATO strategists, and not its army.

Purely hypothetically, Ukraine’s entry into NATO could allow free deployment on its territory of naval and land units of the alliance, the well-known missile defense system and other bases. For example, the territory of Ukraine is fully consistent with the modern concept of the West’s missile defense system: namely, in places currently inaccessible to Iranian or North Korean missiles.

Few people believe the NATO members that the missile defense system deployed in European countries is not directed against Russia. Both the West and the United States are taking all measures to reduce the likelihood of a retaliatory strike from the Russian nuclear forces. And Western strategists are not stopped even by the fact that they unilaterally violate the terms of the START-3 agreement and the "Treaty on the Limitation of Anti-Ballistic Missile Defense Systems". The territory of Ukraine is very attractive for the deployment of NATO military facilities, because it brings the forces of the western aggressive military bloc directly to the borders of Russia.

It’s hard to say how sincere Viktor Yanukovych’s words were when he criticized plans to deploy missile defense elements in Eastern Europe in 2007. I was also interested in whether the missile defense systems deployed on the territory of Poland and the Czech Republic are a direct threat to Ukraine.

Another acute aspect of relations between Russia and Ukraine may be the deployment of the US naval forces on the Black Sea coast of Ukraine. This circumstance will tightly bind the hands of the Black Sea the fleet Russia over the entire sea and will cause significant damage to Russia's security, given the fact that the Aegean and Mediterranean seas are under the control of the Turkish Navy. In the event of Ukraine joining the NATO bloc, the creation of military bases of the US ground forces and the US Air Force on Ukrainian territory is not ruled out.

From all this, it is clear that the presence of the Ukrainian bridgehead will allow NATO to keep under the gun not only Russian territory, but also all countries, up to the coast of the Indian Ocean.

At present, the main question is how realistic is the plan for Ukraine to join the NATO bloc. While the position of the leadership of Ukraine, in terms of accession to the EU, is rather indecisive. Ukraine is trying to find a compromise in relations with its two strongest neighbors - Russia and the West, taking into account their personal interests. This situation does not inspire confidence in the Ukrainian authorities from Russia and the West.

In addition, an obstacle for Ukraine to join NATO is also the unresolved territorial problems between Ukraine and NATO member Romania.

Also, according to some analysts, there is a real danger that anti-NATO sentiments in Ukraine can lead to the separation of many areas from the country and the creation of independent states, and, at best, lead to a loss of confidence in the ruling group of the majority of Ukrainians.

The Ukrainian authorities understand that when joining NATO, they will be required to comply with all instructions of the leadership of the North Atlantic bloc. Perhaps this will be a proposal for the complete disarmament of the Ukrainian army or participation in another NATO military adventure in the Middle Eastern countries.

Knowing this, the Ukrainian government does not yet intend to drive Ukraine into the NATO pool, but this possibility still remains. In the meantime, the situation is in such an uncertain position, Ukraine is trying to use the NATO chip in negotiations with Russia.

Ctrl Enter
Noticed oshЫbku Highlight text and press. Ctrl + Enter
We are
Situational analysis of the death of the MH17 flight (Malaysian Boeing 777), made on the basis of engineering analysis from 15.08.2014US hypocrisy: they want to sit on two chairs
Military Reviewin Yandex News
Military Reviewin Google News
110 comments
Information
Dear reader, to leave comments on the publication, you must sign in.