4 September 2013
153
We wanted the best, but it turned out as always ... What a capacious and vital phrase! And it is so vital that many, both domestic and state initiatives, are sometimes perfectly described by it. In all likelihood, this phrase of Viktor Chernomyrdin becomes flesh today. Only here, in the year 1993, Viktor Stepanovich gave his message to the masses in an aphoristically short and understandable way, then representatives of the current Russian government, in fact, using the same expression, prefer much more cumbersome and streamlined forms to aphoristic. 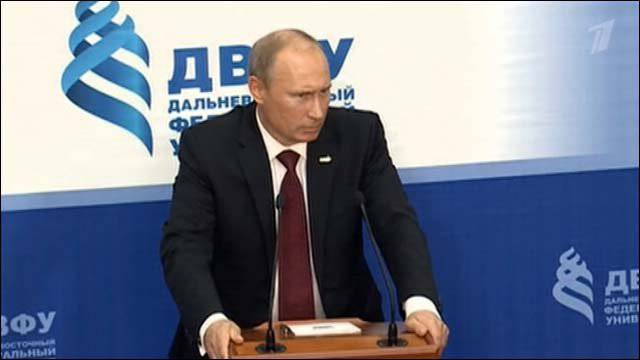 It was possible to judge that “we wanted the best, but it turned out as always,” according to the recent speech by the Russian president at a meeting with Far Eastern students in Vladivostok. In the course of the president’s conversation with young people, one of the students, as it turned out, waving over the economic edge of the Russian budget, suggested that Vladimir Putin think over payments to Russian families who do not take their children to kindergartens. It would seem that the head of state, in a rather extensive answer to a question or proposal that has become characteristic of him lately, declares something like “the proposal looks good, and we will certainly discuss it with the government during one of the joint sessions”, but nothing like Did not happen. Putin’s answer, despite its streamlined and ornateness, unequivocally told the questioner that the Russian authorities are not planning to provide not only new expenses, but revisions are possible with the old expenses and are acceptable to the head of state.

Vladimir Putin:
“At one time we made a decision on the payment of the so-called maternity capital. This, in fact, was one of my initiatives, but these are huge funds that are even difficult to calculate, because if we pay money, and now they are over 400 thousand rubles, if we pay money to all families who have a second child, we can't figure out how many such families there will be. ”
.

Vladimir Putin: "
Now the government is facing a difficult choice - somewhere we will have to proceed in advance from the realities, and somewhere to cut our previously anticipated expenses. ”
.

Is this not the epic Chernomyrdin "We wanted the best ..."? The answer of the president is precisely in this vein, in spite of all his apparent covertness. If the veil hung by the head of state is removed, it turns out that the recent words of Finance Minister Anton Siluanov about the opportunity to save the budget, having refused to pay maternity capital after 2016, are generally supported by the president. In fact, the president makes it unequivocally clear that the existing unintelligible economic growth in the country, which seems more like stagnation, does not allow for the full realization of the entire volume of social programs. But in the correctional activities in terms of social programs, there are not only maternity capital points, but also points on pension reform (with a “discussed” increase in the retirement age), points on “optimization” of wages in the public sector.

I remember how we actively discussed how far Anton Siluanov was from the people, who wants to leave Russian families without the opportunity to receive remuneration from the state for the birth of their second child ... We discussed the incorrectness of Dmitry Medvedev's moves, which promised Siluanov to think over the proposals of pension reform and cancellation of everything same maternal capital ...

And then suddenly, against the background of this intergovernmental theater, another figure appears - the figure of the president, declaring that “we expected that it would grow to such a state, but it grows to such a level”. It turns out that Vladimir Putin has no choice but to try to justify a possible reduction in social spending, to which our country will most likely come as a result of a noticeable reduction in economic growth. In this case, Siluanov could only say what he was allowed to say “from above” in order to get the main portion of the discontent of the “masses”. And when the masses cooled down, the president joined in, saying that the Minister of Finance, in general, was right ... At the same time, the economic “expectations” of Vladimir Putin themselves look a bit strange.

If President Putin hoped that “she (the economy) would be like that,” then it turns out that a wide circle of his advisers and assistants should be put on fat and not be dispersed over 101 km from the capital, as they introduced the head of state into their delusion ... But the most interesting thing is that not all advisers and presidential aides calmed him with the words about “rapid economic growth” and “bold future”, which means that not all were pushing to expand some social programs and freeze others. One of those advisers to Vladimir Putin, who spoke of highly probable problems in the Russian economy, which finally sat on the oil and gas pipe and had its legs dangling from it, was and remains an economist Sergei Glazyev. It turns out that Putin, as his adviser, did not believe Glazyev either, or simply drove his predictions away from himself, hoping for the classic Russian and perhaps for the “miracle-jerk” of the Russian financial system ...

Of course, it was hard for the president to realize that the annual growth of the economy could fall below 3% and at the same time continue to rush down. It was even harder to explain to the Russians about the fact that we would not go far on such an economy. In the end, all this led to the fact that the authorities will most likely have to fall back on unpopular social measures.

But here another question arises: even assuming that the president did not want to take into account the slowdown in economic growth for a long time, and now he has finally taken it into account, why is the possibility of financial constraints determined once again at the level of social policy? For some reason, they do not persistently talk about new super-profits from selling expensive oil, which can patch holes not only in the sphere of social promises made in May of last year, but also actively invest in domestic production that can act as a driver of the economy at any time. There is no mention of the need to block the channels of capital outflow abroad, the volume of which (outflow) is hundreds of times higher than the volume of all social programs in Russia combined. Apparently, all this requires much more tedious work than a simple cuts in the social sector. After all, mothers with children will not put an ultimatum to state authorities, but oligarchic circles, in the event of infringement of their unlimited rights and freedoms, may well shuffle any vertical with an ultimatum ...

If the state is going to save radically, it turns out that the savings will once again be aimed at blindly storing dollars and euros in the reserve fund while waiting for the money to save us from the crisis again ... Perhaps they will. But then it will be like some kind of strange game: first, pre-election and elective promises, then a timid start to their fulfillment, and then we dry the oars, for the crisis ...

Ctrl Enter
Noticed oshЫbku Highlight text and press. Ctrl + Enter
We are
For young people want to follow. Are there any prospects for youth policy?Situational analysis of the death of the MH17 flight (Malaysian Boeing 777), made on the basis of engineering analysis from 15.08.2014
Military Reviewin Yandex News
Military Reviewin Google News
153 comments
Information
Dear reader, to leave comments on the publication, you must to register.