Briefly about the tasks and prospects of the Pacific Fleet

4 September 2013
19
In the past, the Pacific Fleet (Pacific Fleet) was the largest operational and strategic association of the domestic naval fleet. A huge zone of responsibility forced the state to actively develop it and provide everything necessary. After the collapse of the Soviet Union, the country's economic and, as a result, industrial or logistics capabilities sharply decreased, which, among other things, led to a deterioration in the condition of the Navy in general and the Pacific Fleet in particular. 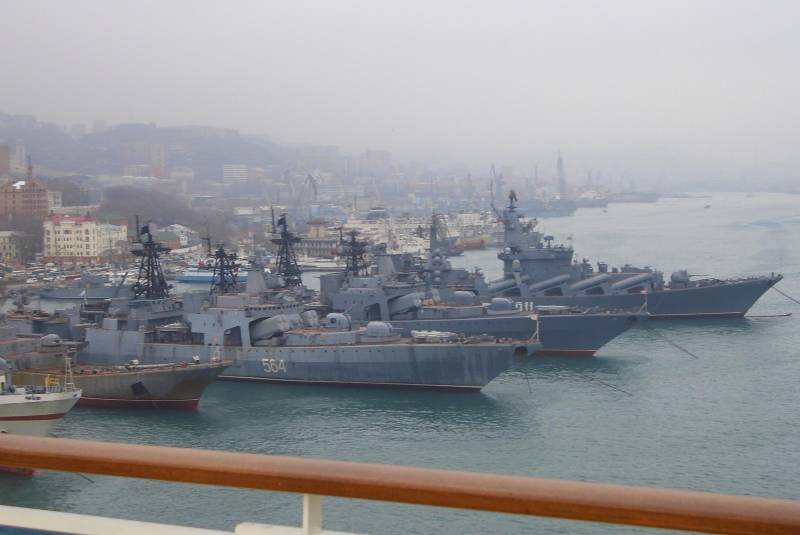 Not so long ago, an article was published by A. Khramchikhin, which compared the state of naval forces of various countries in the Pacific Ocean. As a result of comparison, the Pacific Fleet was only in fifth place, giving way to the fleets of China, the United States and other countries. Despite all the controversy surrounding this rating, the state of the Pacific Fleet is indeed noticeably worse than a few decades ago. It will take a lot of time, effort and money to restore the former potential. It is necessary to determine the answers to several important questions.

The second task of the Pacific Fleet is the protection of the eastern borders of Russia. One of the most actively discussed issues in this context is a potential attack by Japan to capture the Kuril Islands. It is worth noting that such an armed conflict is not only a subject of discussion, but also one of the legends of the teachings of the Pacific Fleet. During the maneuvers, relevant events are regularly held, the purpose of which is to work out counter-landing of the landing force or disembarking on the unprepared coast of the islands.

From the protection of the Kuril Islands the question of an economic nature directly follows. The waters around the islands and the straits between the Kuril Ridge and the mainland are more than interesting from a fishing point of view - in these areas fish are harvested, including valuable species. The fishing industry is one of the important sources of income in the Far Eastern regions of Russia, and therefore requires an appropriate approach to the protection of its economic interests.

In mid-August, the ships of the Pacific Fleet and the Coast Guard of the FSB Border Service participated in joint exercises, during which they worked out the tasks of protecting the state border and countering terrorists. It is worth noting that the most frequent problem of the coast guard of the FSB are various border trespassers who, overwhelmingly, in most cases of permission enter the Russian territorial waters precisely for poaching purposes.

The volume of illegal fishing at present is such that the coastguard has to initiate cooperation with the navy in the protection of territorial waters. According to various estimates, overseas poachers annually catch fish and other "seafood" in the amount of at least half a billion US dollars. Moreover, there are estimates of about 600-700 millions. Thus, active joint actions of border guards and military sailors will allow maintaining a considerable share of natural resources, without allowing foreign fishermen to catch them without any permission for that.

Nevertheless, the Pacific Fleet, while performing various training and combat missions at a short distance from the bases, should not forget about long-distance hikes. In addition, it is necessary to take into account the possibility of the interaction of the ships of the Pacific Fleet with the ships of other Russian fleets. The Northern, Baltic and Black Sea fleets regularly have the opportunity to work out such interaction during trips to the Mediterranean Sea or the Gulf of Aden. The Pacific Fleet, due to the geographical location of its bases, is significantly limited in such capabilities. However, as events of recent times have shown, the Pacific Fleet, if necessary, may receive assistance from other operational-strategic formations of the Navy.

In mid-August, the flagship of the Black Sea Fleet Guards missile cruiser "Moscow", coming out of the Black Sea, reached Cuba, and then made the transition to the city of Corinto (Nicaragua) on the Pacific coast of Central America. This march of the Black Sea sailors clearly shows the mobility of the compounds, which can be useful with appropriate developments.

Regardless of the specific training or combat tasks facing the Pacific Fleet, the main and main problem remains the upgrading of the equipment and auxiliary facilities. Years of insufficient funding had a bad effect on the condition of all components of the fleet and it is necessary to recover lost and recover in the shortest time possible. Only after that it will be possible not only to effectively protect the coastal zone, but also to make trips to remote areas of the Pacific Ocean, carrying them in permanent duty.

Ctrl Enter
Noticed a mistake Highlight text and press. Ctrl + Enter
We are
Destroyers Ave 956. Overview of the technical conditionPacific Fleet of Russia: the fifth most powerful in the Pacific
19 comments
Information
Dear reader, to leave comments on the publication, you must to register.