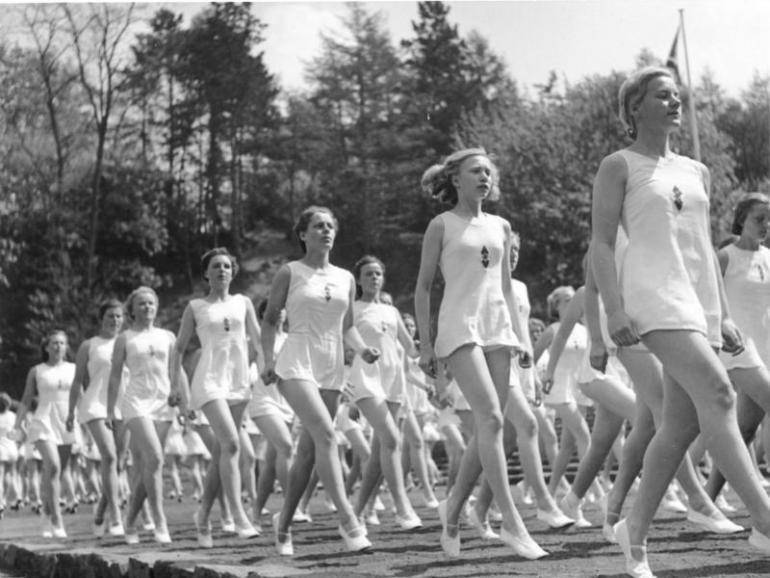 In 1937, the Nazis opened "Wife Training Schools". Through them were to pass the girls marrying members of the SS and NSDAP functionaries. In schools, they were taught home economics, child care and agriculture. Wife - it was the ideal of a woman for the Nazis, women were forbidden to study in universities and work in offices and in production.


At the beginning of August in Berlin, instructions were found in the archives for conducting studies at Nazi "wives' schools". These documents gave rise to talk in the First World about another kind of Nazism - in addition to anti-Semitism and anti-communism, it was also antifeminism.

Reichsfuhrer SS Heinrich Himmler in 1936, signed a decree on the creation of a special training course for girls who want to become the wives of the Nazis. The Bride Schools, where the girls took the course of a young wife, was headed by Gertrude Scholz-Klink - the head of the National Socialist Women's Organization (at the peak, in 1943, there were 7 million German women in this organization).

Those educational institutions were enrolled in those who intended to tie the knot with the members of the SS and the liberated workers of the National Socialist Party of Germany. In the 1939 year, this list was expanded - it included such potential husbands as officers.

The first school was opened on the island of Schwanenwerder on Lake Wannsee near Berlin (near the villas Goebbels and Albert Speer). Before 1944, 32 of such schools appeared in Germany in total. 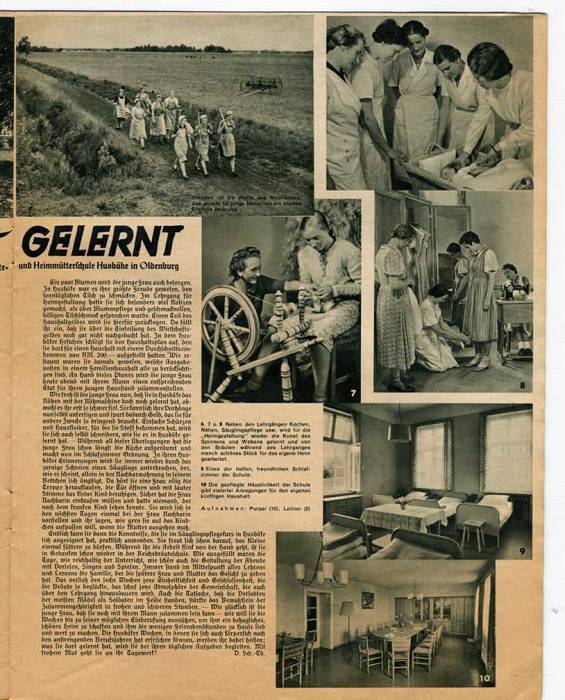 Only Ariek was admitted to the school (sometimes an exception was made for German women with no more than Jewish blood 1 / 8). They should not have had physical injuries and mental illness (those who had one of the parents suffered from schizophrenia were also not admitted to school).

In the bride’s schools, there were an 6-week course (from 1939, a two-month course), during which not only home economics was taught, but also the fundamentals of genetics and the doctrine of races, as well as political science and stories. Mandatory were 2 physical education classes every day. Also, agriculture became an obligatory element of studies - only this work was recognized as worthy of a German woman (more on that below).

In addition, brides were taught rhetoric, secular manners and childcare. At the end of the course, subject to the assimilation of all knowledge, certificates were issued, giving the right to marry "exemplary Germans." Such graduates made marriages according to neo-pagan rites. 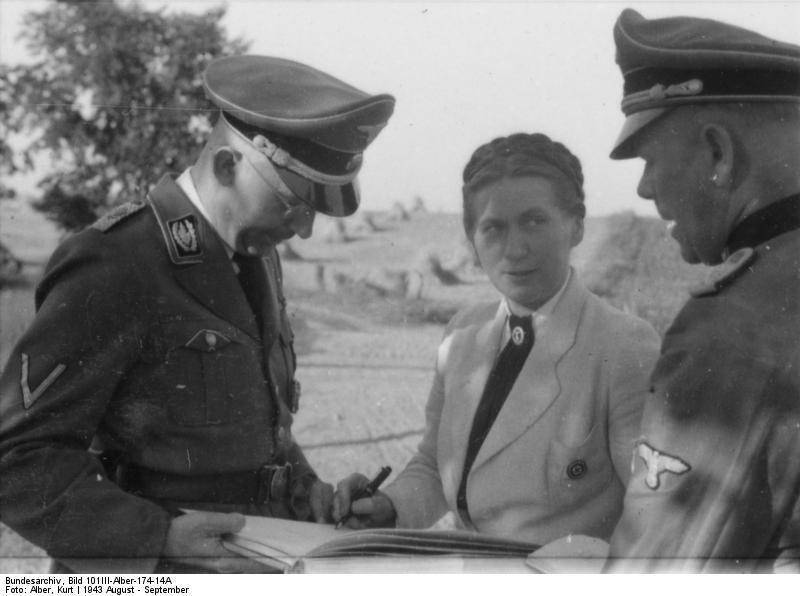 Education in such schools was paid - 135 Reichsmarks (400 English pounds, or approximately 20 thousand rubles at the current rate). But this money soon "fought back": when married to a graduate of such a school with a "true Aryan", the state gave them an interest-free subsidy in 1000 marks for 5 years (150 thousand rubles), and for each child from this amount, 250 marks were forgiven.

The basis of the German wife’s upbringing at that time was “three well-known Ks”: kinder, küche and kirche (children, kitchen and church). And this is not an artistic exaggeration - this is exactly how the Nazi women's ideal was seen. More precisely - the Germans, because the ideological basis that the "schools for wives", that the role of women in society was invented before Hitler came to power. In 1917, the first “School of Mothers” was opened in Stuttgart, where, against the background of the First World Women, they were centrally taught loyalty to the family, the state and home economics. 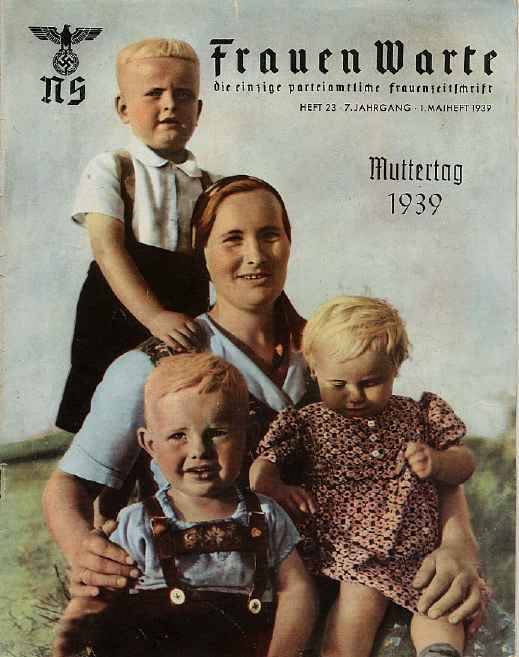 The Nazi regime was very interested in increasing the population. And from this it followed that hired work and training in higher education institutions were an obstacle to the fulfillment of the main function of a woman.

If the working woman got married and voluntarily left work, she was given an interest-free loan in 600 marks. Since 1934, an active birth rate promotion has begun: child and family allowances are introduced (up to 30 marks for one child, a little more than 4200 rubles), medical care for large families is provided at preferential rates. Special schools were opened where pregnant women were prepared for future motherhood. The propaganda did not get tired to extol the dignity and honor of the mother, and those women who had 8 children were awarded the Golden Mother Cross (they were additionally entitled to allowances in 500 marks per month - about 70 thousand rubles). Germany became the only major European country in which the birth rate grew at very high rates. While in 1934, a little over 1 million babies were born, in 1939 there were already about 1,5 million children.

Encouraged and the pursuit of women politics. In 1941, the number of women among members of the Nazi Party was 16,5% (this is almost 2 times more than the woman was in the CPSU (b) in the USSR).

For unemployed women from the lower ranks (workers and peasants), labor camps were organized in which they were required to work 20 hours per week. Inhabitants of labor camps received uniforms, a mandatory attribute of which was an armband with a swastika. Girls began to be called “female workers” - “Arbeitsmaiden” filling the outdated word “die Maid” (maiden, girl) with ideological content. Each letter signified one of the virtues inherent in the German woman: der Mut - courage, die Aufopferung - sacrifice, der Idealismus - idealism, die Demut - humility. 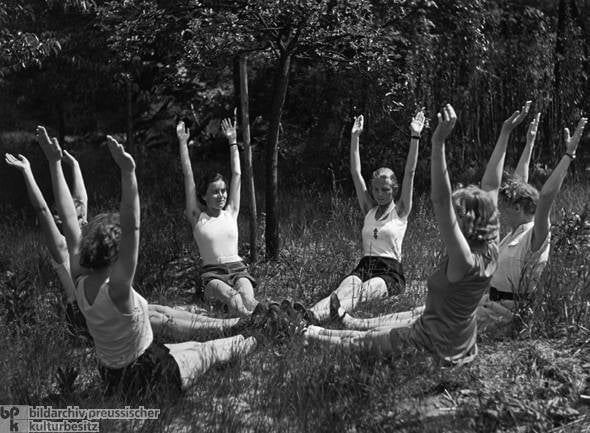 After coming to power, the Nazis began to consider the desire of women for a professional, political or academic career as an unnatural phenomenon. The highest happiness for a woman should have been her stay at the family hearth next to her husband. Not accidentally, in the 1921 year, the NSDAP decided that women should not be allowed to high party and state posts. Already in the spring of 1933, the systematic liberation of the state apparatus from the women employed in it began. Not only employees of institutions were dismissed, but also of women doctors who were married, because the Nazis declared that taking care of the health of the nation was such a responsible task that it could not be trusted to a woman.

In 1936, married women who were serving as judges or lawyers were dismissed because their husband could have kept them. The number of women teachers has drastically reduced, and in women’s schools, home economics and handicrafts have become the main subjects of study.

In fact, a ban on higher education for women was announced. Already in the 1934 year, there are only 1500 students left in German universities (in the 1930 year - thousands of 32). The fate of the women’s deputies of the last Weimar Reichstag is noteworthy: 4 committed suicide, 10 fell into a concentration camp, 30 were under house arrest, and 43 were forced to emigrate from the country.

A more differentiated policy was pursued by the regime for women employed in the workplace and in the service sector. The Nazis did not touch either those 4 million women who worked as “home helpers”, nor the numerous squad of saleswomen whose work day was not fully paid. On the contrary, these studies were declared "typically female." The work of unmarried girls was strongly encouraged - from January 1939, labor service became mandatory for all unmarried women younger than 25 years; mainly they were sent to the village or maidservants to mothers of many children.

Agriculture was also welcomed: work on the land was declared one of the main virtues of women. The allocation program for families of garden plots was invented by Hitler - later it was taken over by almost all European countries (including the USSR under Brezhnev). 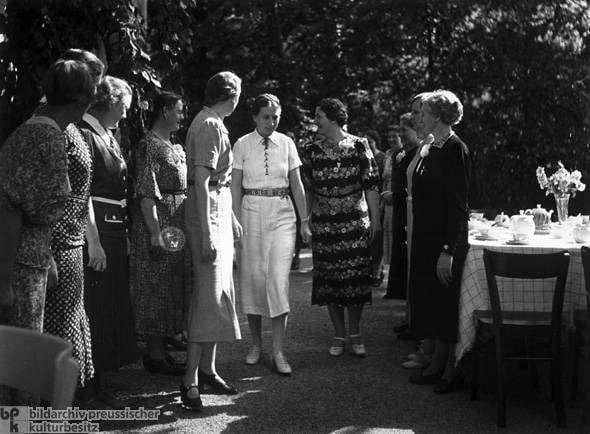 Today, this position of women in Nazi Germany can be equated to the position of women in the Muslim world. And this is partly true: the Swiss psychologist Karl-Gustav Jung wrote at the end of 1930 that the Nazi ideology is very similar to modernized Islam (rather, of Turkish or Iranian type).