“Not for that I went to the army to fight for al-Qaeda in Syria!”

4 September 2013
115
In the United States, the number of anonymous protesters is growing, through social networks opposing the anti-Syrian aggression of the White House. The Hashtag #IDidntJoin has become one of Twitter’s “hits” over the past week. Under this tag are posted messages from those US troops who are unhappy that the native government actually stands in Syria on the side of Al-Qaeda. In the photos on the network, you can see the military, who covered their faces with posters with text like this: “I will not fight for Al-Qaida in Syria!” American observers note that officers, soldiers and veterans are closing their faces because of fear of persecution: for in the most democratic state of the world with the freedom of speech is very bad.


New material by publicist Michael Snyder, author of The Beginning of the End, on the website "Activist Post" It is dedicated to the question of public opinion in the United States about a possible Syrian attack by Washington. 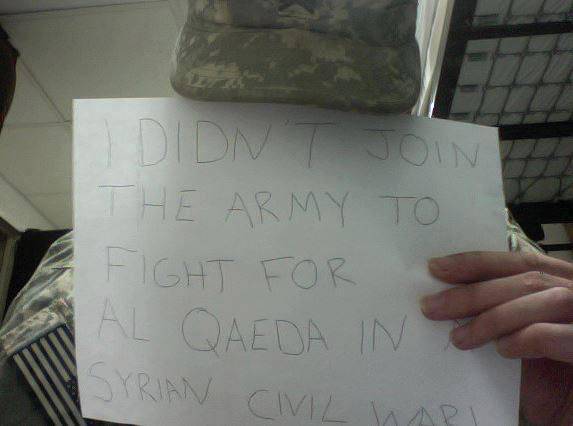 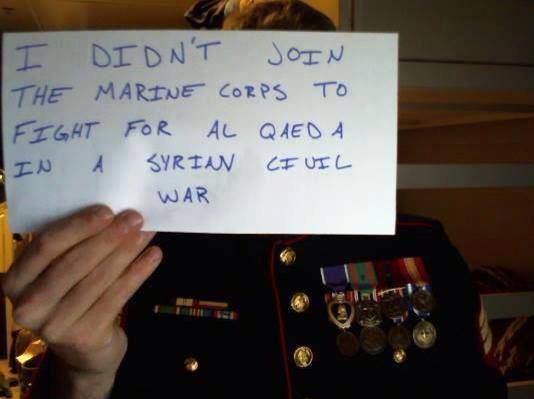 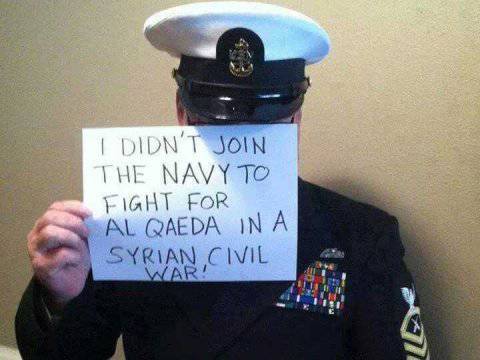 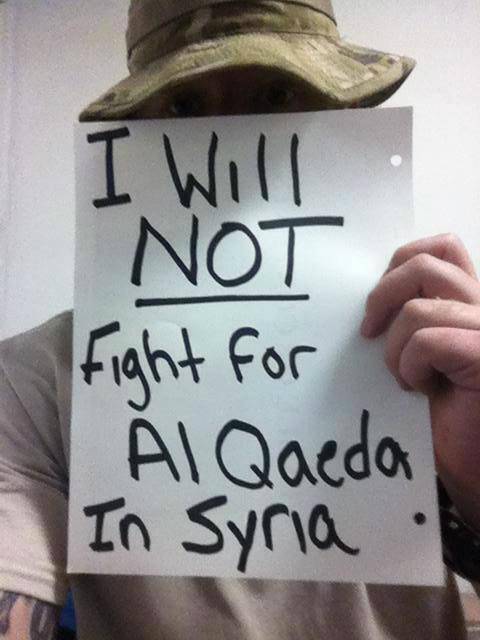 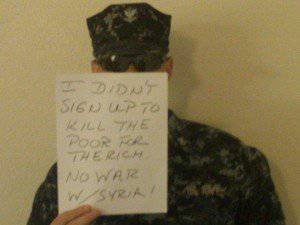 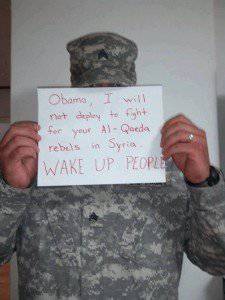 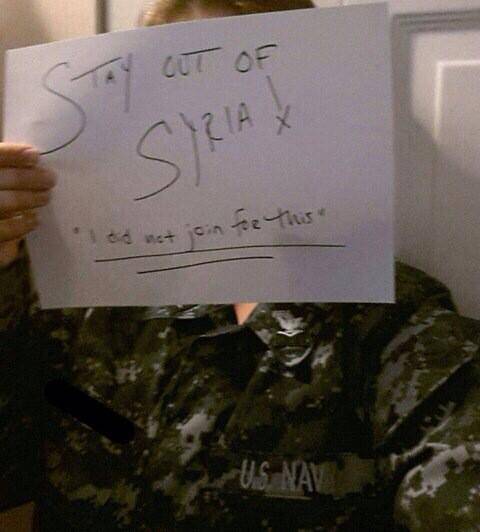 As the observer notes, the majority of Americans oppose the war in Syria. The new hashtag (#IDidntJoin) on Twitter spawned a whole wave of messages from military personnel, who expressed in this way dissatisfaction with the fact that they might have to defend the al-Qaeda’s Syrian interests. Of course, there are also servicemen who are in favor of a war with Syria, but they, as the author of the article seems to, are a tiny minority. Hopefully, Snyder says that the Obama administration and members of the US Congress will listen to public opinion.

Below is a translation into Russian of some posters that are being held by American servicemen who have publicly declared that they do not want a war with Syria. (All photos are from Twitter; Americans put on military uniforms, but deliberately covered their faces because of fear of running into “problems”).

The publication Business Insider, Comrade Snyder writes, turned to the servicemen asking what they thought about a potential conflict with Syria. 52 servicemen answered the question, and 50 of them spoke against such a war.

One of them, 6, who fought in the Afghan and Iraqi campaigns for years, wrote: “We don’t need another war, and we certainly don’t need further participation in a civil war in which our goal is not clear, and our allies on in fact, they are not allies. ”

These are not just privates who oppose the war with Syria. According to the Washington Post, many among high-ranking military officials express “serious doubts” about “taking action” in Syria.

The point is that the Americans do not want to shed blood in the Islamic civil war. Neither side is the “friend” of America. And anyone, Snyder notes, who thinks that the Syrian rebels are “good guys,” is currently carrying perfect rubbish. Even the State Department admits that entire branches of al-Qaida are fighting in Syria.

But then why did the Pentagon assemble in Syria? The military is obviously insane, the author believes. Only madmen may wish to go into battle in alliance with al-Qaeda. The journalist writes with inspiration:

“Not one drop of precious American blood should ever spill over Al-Qaida.”

Unfortunately, the author adds, the Obama administration seems determined to make this war a reality. So very soon, the US military will be forced against their will to fight for al-Qaeda in Syria ...

In another material published on the site "The Economic Collapse"The same Michael Snyder asks the question: why do we say that the United States has “no choice,” while helping the “rabid jihadists” who destroy entire Christian villages, rape Christian women and joyfully decapitate Christian prisoners? If you are a Christian, the author writes, you should have nothing to do with this crazy genocide. If the types from Dzhebhat an-Nusra win in Syria, for two million Christians, life will turn into an absolute hell.

Snyder can not be called a supporter of Assad. When the opportunity arises, he disavows him: “It's not that we have to support Assad ... Assad is terrible. He should have rotted somewhere in prison. ” Further, the journalist adds: "But just because the country has a bad leader does not mean that we got an excuse for an attack."

The American military machine, Snyder considers, should start when it is convincingly proved that national interests are under threat. But the state has no right to get involved in the bloody civil wars between Assad and Al-Qaeda.

So why do we want to wage hostilities, being on the side of the Christian murderers? Such a question is asked by the author, further recalling what “choices” Christians in Syria receive from “rebels”.

In those areas of Syria that are controlled by the rebels, Christians are extremely cruel to the people. There are eyewitness accounts from Christian missionaries who recently visited the region.

Four options were offered to Christian residents in those places: 1) renounce Christianity and convert to Islam; 2) pay tribute to Muslims for the right to preserve the faith; 3) die; 4) to flee, throwing all acquired. However, this choice is not always given.

In other cases, the Syrian rebels decapitate Christians and feed the bodies to dogs. How would you feel, Snyder asks, if a member of your family was beheaded and served to dogs for dinner?

And these rebels continue the slaughter of Christians, although they know that the world is watching them.

Sometimes the rebels do not kill women. If they are young and beautiful, they are systematically raped - which is what happened to one 15-year-old Christian girl from Quseir named Mariam.

The commander of the Dzhebhat an-Nusra battalion in Quseir took Mariam as his wife and raped her, and then refused her. The next day, a young woman was forced to marry another Islamic militant. He also raped her, and then refused it. The girl went from hand to hand 15 days; Mariam raped 15 different men. Her psyche could not stand it; Mariam has gone mad. In the end she was killed.

And is Obama going to help these monsters?

His administration, the author writes, insists that we "must" attack Syria: after all, Assad allegedly used chemical weapon against their own people. Secretary of State John Kerry said that the samples taken by UN inspectors led to the conclusion that sarin was used.

According to Reuters, the UN has received evidence that the Syrian rebels have been using sarin against Assad since May. And the rebels themselves admitted to the Associated Press reporter that they used sarin during the very incident that the Obama administration was so concerned about.

Chemical weapons were supplied to Saudi Arabian militants, but the Obama administration, Snyder points out, “never, never” does not recognize this. If the United States gives the Saudis, in the future it could shake the petrodollar. Instead, the US government will eventually do exactly what the Saudis want, namely, attacking Syria.

Very soon, the publicist thinks, the US military will be drawn into the circle of civil war between a brutal dictator and absolutely jihadist murderers.

Is the supposed “lesson” to Assad of the outbreak of the Third World War? Of course not, says Snyder.

Observed and translated by Oleg Chuvakin
- especially for topwar.ru
Ctrl Enter
Noticed oshЫbku Highlight text and press. Ctrl + Enter
We are
Countries that allowed women to fight and kill (history in 19 photos)Results of the week. “War is not poker! It cannot be announced when it pleases! ”
115 comments
Information
Dear reader, to leave comments on the publication, you must to register.