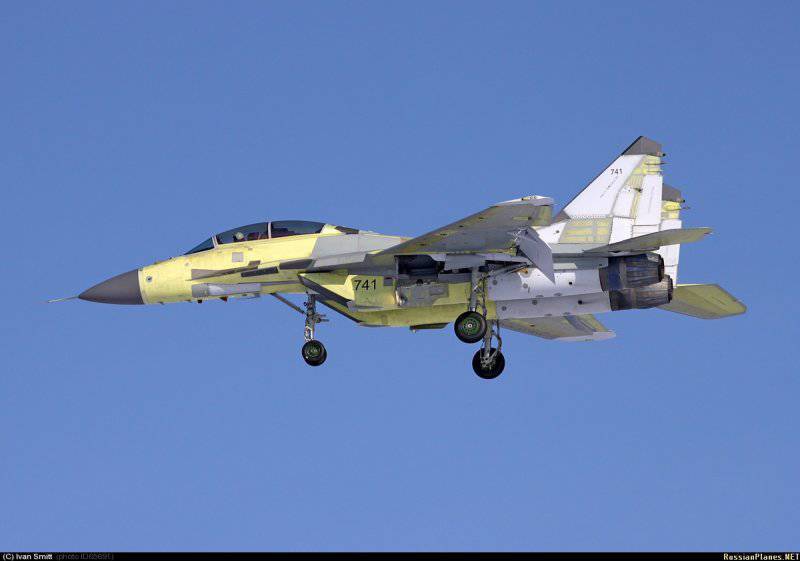 The Serbian newspaper Politika 1 September 2013 of the year published an interview taken by the newspaper’s correspondent Miroslav Lazansky with the Director General of RSK MiG Sergey Korotkov at the MAKS-2013 air show. Although the interview is mainly of an advertising nature, it’s aimed at Serbia, it contains a number of interesting moments. First of all, it is worth noting the statements of S. Korotkov that RSK MiG decided to rename the MiG-35М / М29 (and, apparently, MiG-2К) aircraft to MiG-29, and that MiG-35 proposed for procurement for BB From Russia, it is essentially the same aircraft as the MiG-35М29.

Mr. Director, recently the Russian press wrote that the Russian Ministry of Defense canceled an order for MiG-35 aircraft, and you will not have a job.

Is it possible to resolve the question of whether the MiG-29М2 is a different type in relation to the MiG-35. Or is it actually one plane? There is a lot of controversy over this.

MiG-29М2 and MiG-35 identical aircraft in weight, size, radar, engines, planned avionics and electronics, in suspended arms, in armsoutwardly. There is no difference there. True, we have a single version, which we called the MiG-29M, while the double version of the aircraft is designated as the MiG-29М2. In fact, the MiG-29М2 is an export version of the MiG-35 combat aircraft for the Russian Air Force. Here, let me tell you that at the MAKS-2013 cabin this year, we abandoned the name MiG-29М2 and adopted the name MiG-35. In order not to confuse more our customers, as well as our opponents. Thus, in the future there will be only the MiG-35, although it will vary depending on the equipment, depending on the wishes of the customer. For example, India is developing its electronics for this aircraft and we are installing it.

What country are you currently producing MiG-35 airplanes for?

How many targets of the MiG-35 can accompany simultaneously, and how many at the same time fire?

Serbia is a potential buyer of the MiG-35. Did you talk about the possibility of giving us airplanes made for Syria, which you cannot supply right now due to a known situation?

We have a contract with Syria for the aircraft and Russian President Vladimir Putin said that the contracts should be respected. Syrian MiGs we will not sell to anyone.

But you do not deliver?

This is not for me. This is a question between us and Syria.

If Serbia decides to buy MiG-35, what will be the price of the aircraft?

We will give you airplanes at the same price as for Russian military aircraft.

That is, at the factory price?

Yes, both for Russia and for Serbia.

What are the proposals of outboard weapons for aircraft, equipment for intelligence and electronic warfare?

We have everything you want from this equipment in production, and everything is already integrated on the MiG-35 aircraft.

All Russian-made air-to-air missiles can be integrated into MiG-35 aircraft for Serbia. We can even integrate Western-made rockets, if you want, the MiG-35 has a completely open architecture for all existing or only developed types of missiles.

Is there real-time two-way data transfer between planes and ground stations?

This possibility exists, and it is implemented in practice.

Who produces the wings and fuselage of the MiG-35?

Our company has a full cycle of aircraft production, from the design office, through the construction of aircraft, test methods, to the delivery and maintenance of aircraft. True, we buy engines, radar and generators from other companies, and then install them on airplanes. Earlier in the Soviet Union, the MiG company only designed the aircraft, and then it was produced according to the design documentation at other enterprises of the USSR. Now everything is different.

What percentage of composites used on the MiG-35?

About 16 percent, but there is a special coating, which on the MiG-35 aircraft greatly reduces the radio-location visibility, so that we can say that it is, in fact, an “invisible” aircraft, or an aircraft with low radar visibility. In view of this and other features, the Mig-35 is an 4-plus-plus generation aircraft. The advantage of the MiG-35 is also that it is designed to take off and land on bad airfields, and can use asphalt roads as a runway. In the double version, it is possible for the operator to choose targets and weapons that can be used; with the MiG-35, it is possible to quickly train a larger number of pilots. For your pilots who fly the MiG-29, retraining to the MiG-35 will not be an expensive or difficult or lengthy process.

Still, why was the MiG-35 called the 4-plus-plus generation?

There is no consensus in the world what to call the “fifth” generation of aircraft, therefore we call the MiG-35 generation “4-plus-plus”.

We fight and compete with Typhoon, Rafale, Gripen, we are superior to F-18. We are much cheaper than all of them. Of course, the price depends on the aircraft equipment.

How many countries in the world today use MiG type aircraft?

Our planes fly pilots 29 countries around the world. MiG-29 is used even by Americans to train their pilots. You know - for training in air combat, in "squadrons of aggressors".

Is there a possibility of cooperation in the repair of the MiG-29 for other countries in our aircraft repair plant Mom Stanojlovis in Batainitsa?

We were at this enterprise, you can become a regional center for repairing the MiG-29 not only for neighboring countries, but also for Algeria and other Arab countries that have this type of aircraft in service. Why take them to Russia if it can be done with you, and we have committed ourselves to repairing these aircraft in Batainitsa. We assume that Cuba will repair its MiG-29 from you. You know, it is not enough just to buy a modern aircraft, you need to support it.

If Serbia signs a contract for the purchase of MiG-35 aircraft today, how long will it take to deliver the first aircraft?

Aircraft are manufactured in working order, after signing the contract and prepayment will take from 18 months to two years before the delivery of the first aircraft. From a technological point of view, it is usually called two years, but for Serbia there is an opportunity to shorten this period.

Ctrl Enter
Noticed a mistake Highlight text and press. Ctrl + Enter
We are
Interview of V. Putin to Channel One and the Associated Press AgencyWhat you didn't want to know about England
68 comments
Information
Dear reader, to leave comments on the publication, you must to register.