Destroy corruption in the bud


The emergence of corrupt relations in the defense industry is possible at all stages of the procurement cycle, and the fight against this evil must begin at the stage of formation of the state defense order. At present, the main components of corruption arise precisely in the course of planning the procurement of goods, works, services in the economic justification of the needs of the state and the calculation of the initial price of contracts.

At the planning stage of public procurement, as a rule, the actual acts of corruption, that is, unlawful self-serving actions (inaction), have not yet taken place, and only the necessary conditions for their commission are created. An exception may be cases of bribing officials involved in planning public procurement for providing insider (from the inside. Inside) information. Bribes can be offered for the opportunity to get acquainted in advance with the plans and schedules of procurement, especially in that part which is not subject to public disclosure, as well as the content of the forthcoming competitive (auction) documentation, with the technical characteristics of the planned to purchase products, with technical specifications for the work , service. Potential public procurement participants are always interested in receiving information on planned procurement as early as possible so that they can prepare for it before official publication of tender notices, thereby obtaining a competitive advantage over other procurement participants. Information of this kind is expensive and many business representatives are willing to pay a lot of money for it. Hence the corruption.

According to the Head of the Anti-Corruption Enforcement Administration Directorate of the General Prosecutor's Office of the Russian Federation, Alexander Anikin, the lack of a clear regulatory framework for determining the procedure for establishing the initial (maximum) contract price leads to the establishment of such a price not based on a study of the market budget. financing, which entails the conclusion of contracts at inflated prices, on extremely unfavorable conditions for the state and with çäàåò prerequisites for the so-called kickbacks.

The absence of a regulatory settlement of pricing issues for OPK products creates corruption risks in the activities of government customers. It is primarily about the formation of the initial (maximum) price of the state contract. Violations related to the signing by officials of additional agreements to state contracts on changing their conditions and value are common. As a result, according to the data of the Accounts Chamber of the Russian Federation, the effectiveness of the tenders conducted for the procurement of VVST remains low. From 2007, the level of reduction of the initial contract price does not exceed three percent, while in world practice this value is within 15 – 20 percent.

It should be noted that the inconsistency of the considered sphere is predetermined by the nature and essence of market relations - the manufacturer (supplier) of goods, the contractor always seek to sell their products, the results of labor are more expensive, and the buyer - to purchase these goods, works, services at the lowest possible price ( taking into account their quality).

In accordance with Article 22 of the Federal Law 5 of April 2013 No. 44-ФЗ “On the contract system in the field of procurement, goods, works, services for state and municipal needs” (hereinafter the Law on the contract system), there are five main methods for determining the price of a state contract . Analysis of these methods and the study of law enforcement in public procurement, including judicial practice, allow us to formulate a forecast of the occurrence of corruption risks in their application.

According to the Law on the Contract System, the method of comparable market prices (market analysis) is a priority for determining and justifying a contract price. However, in its practical application, there may be a number of serious problems. Thus, the law does not provide for the prices of how many potential bidders to take into account when calculating the initial (maximum) contract value, which of them should be used when determining the initial (maximum) contract price: the average value of all prices collected by the customer, the minimum / maximum of all or other, which information should be specified in the documentation on the auction or in the notice of the request for quotations as sources of price information. 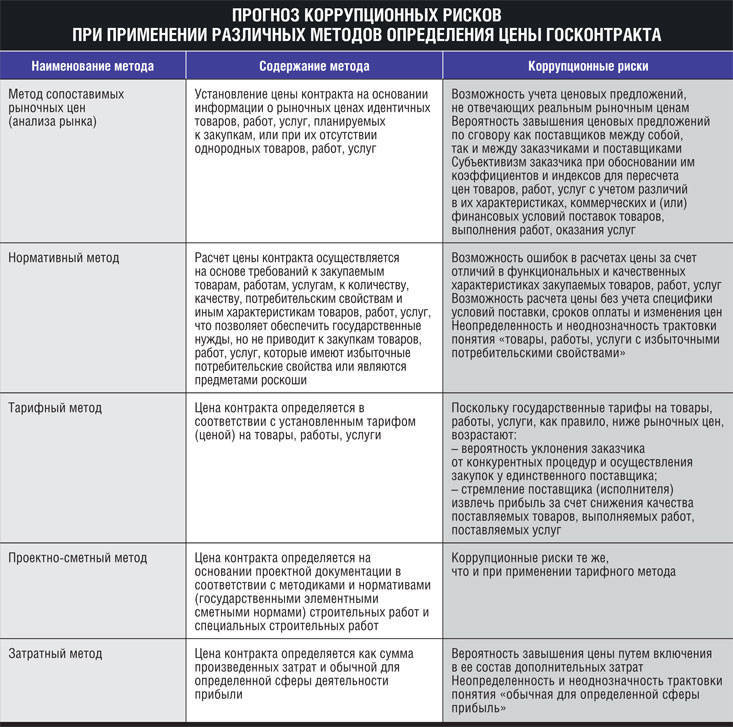 These rules provide the customer with a wide field of action at their discretion, because the law does not specify what is meant by "other methods for determining the initial (maximum) price of the contract," and does not specify how the customer should "justify the impossibility" of applying the methods established by law . In this regard, situations are quite real when an unscrupulous customer, taking advantage of these very uncertain norms, will independently, for the sake of personal vested interests, determine the initial prices of goods, works and services purchased, including the costs of the expected “rollback”.

In the scientific literature there is another serious problem of pricing arising from the practice of holding auctions, which implies a change in the price of the purchase in the direction of its decline. Usually, auctions are focused on market products with a market price, that is, the customer is forced to set an initial price at which the auction is to take place. This becomes possible only in the case of an overpriced initial price, since the auction will not take place when a fair price is appointed - there will be no game for a fall, and if the price is undervalued, no applications will be received. As a result, an auction leads to an overspending of public funds, and an overestimated contract price in turn creates conditions for the formation of “kickbacks”.

Art of formation of tender documentation

The corruption risks of the stage of formation of the tender (auction) documentation lie in the fact that the customer, realizing the unlawful intent for the particular organization to become the winner of the tender (auction), can set out the requirements of the tender documentation in such a way that the “necessary” organization against the background of other procurement participants looked the most profitable. Here can be used as the formulation of specific requirements for the procurement participants, and the establishment of requirements for the subject of procurement. It is not excluded the use of banal bribery: with a bribe, you can force an official to determine the conditions of the tender so that the company-bribe-giver is the only candidate who fully meets all the requirements. 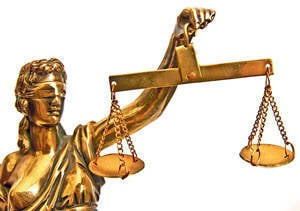 The “sharpening” of the tender (auction) documentation for a particular procurement participant may manifest itself in the following.

Secondly, by subjective interpretation by the customer of the rules for describing the object of purchase stipulated in Article 33 of the Law on the Contract System, especially since this article contains language that has a broad, ambiguous interpretation (for example, “if necessary”, “if possible”, “ description of the object of purchase may include "and others.). Using the above ambiguous formulations, the customer, on external legal grounds, can formulate a description of the subject of the procurement in such a way that it will completely coincide with the product that only the “right” supplier has. This, in turn, will allow him to reduce the delivery time and price in the submitted application and thereby claim to be recognized as the winner of competitive procedures.

Thirdly, by establishing unrealistic or difficult deadlines for the fulfillment of obligations under a government contract. This kind of notice of placing orders with unrealistic deadlines most often occur at the end of the calendar year, when the customer tries to explain the tight deadlines by the need to “close” government contracts and absorb the allocated budget funds in the current fiscal year. According to Andrei Khramkin, a well-known specialist in the field of public procurement, placing an order in an emergency at the end of the year implies an urgent acceptance of low-quality products under a large “rollback”.

Another variant of the corruptogenicity of the tender documentation, associated with the establishment of obviously unrealistic deadlines for the execution of a state contract, may be the situation when the customer expects to impose his “help” on the winner of the competition by providing him with the results of the work already done, which the contractor must pass for allegedly done.

A considerable field of corruption is created by the deliberate distortion of the contents of the tender (auction) documentation, including those of a purely technical nature. Thus, at the round table of the Open Government Working Group on improving the procurement process that took place on 30 this May, it was noted that tricks such as using Latin letters, typos and errors, lack of keywords, replacing letters with similar numbers, use dashes in the root of the word, separation of letters by spaces. Of the 3,9 million analyzed procurement notices, 12 500 cases were found to be distorted. The result of this kind of technical shortcomings of the tender documentation, together with other violations, was that, according to experts, the potential damage from violations in the field of public procurement conducted in 2012 was 874 million rubles.

Thus, at the stage of the formation of a state order for the supply of goods, the performance of work, and the provision of services for defense and military security, there are many prerequisites for both regulatory and organizational nature for the emergence of corrupt relations. Minimizing these prerequisites will significantly prevent the occurrence of corruption in the subsequent stages of procurement.

Ctrl Enter
Noticed oshЫbku Highlight text and press. Ctrl + Enter
We are
Thieves in uniforms and jackets. Corruption in the defense industry and the army is detrimental to the state’s defenseTo the peculiarities of the modern Russian military-technical policy
Military Reviewin Yandex News
Military Reviewin Google News
36 comments
Information
Dear reader, to leave comments on the publication, you must to register.