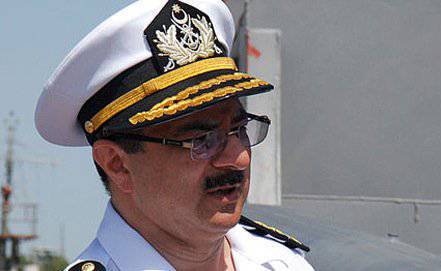 Commander of the Naval Forces of the Republic of Azerbaijan, Vice Admiral Sultanov Shahin Ashraf oglu.

ASTRAKHAN, September 3. / Corr. ITAR-TASS Elena Porotikova. Azerbaijani Navy ships will arrive in Astrakhan for an unofficial visit on Wednesday for the first time, ITAR-TASS correspondent was informed by the deputy commander of the Caspian Flotillas, Captain 1st rank Alexander Prokhorov. "The ships of the Azerbaijani Navy left the port of Baku. Now they are accompanied by our small artillery ship Volgodonsk. On Wednesday, guests will arrive at the port of Astrakhan," Prokhorov said.

Three warships will arrive in Astrakhan, among them the patrol ship of the 159 A project and the control ship of the 888 project. The detachment is headed by the commander of the Naval Forces of the Republic of Azerbaijan, Vice Admiral Sultanov Shahin Ashraf oglu.

According to the press service of the Southern Military District, in the one-day visit program, the Azerbaijani guests are scheduled to meet with the command of the Caspian Flotilla and the leadership of the Astrakhan region. The sailors will also lay wreaths at the Eternal Flame and flowers at the monument to the first president of Azerbaijan, Heydar Aliyev. In addition, at two o'clock the ships of the Azerbaijani Navy will open "doors" for everyone, you can take pictures and inspect the cabins and the cabin of the ships.

Representatives of the Caspian flotilla visited the Republic of Azerbaijan several times. This year the rocket ship Dagestan and the small artillery ship Volgodonsk were in Baku in early August.

Ctrl Enter
Noticed a mistake Highlight text and press. Ctrl + Enter
We are
Innovation Day of the Southern Military District: Pictures from the ExhibitionShips of the Caspian Flotilla in Volgograd
6 comments
Information
Dear reader, to leave comments on the publication, you must to register.