The US is actively preparing for war in Europe 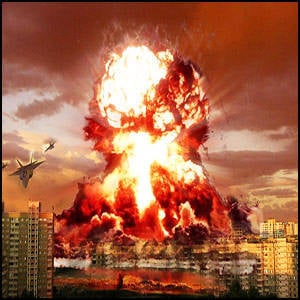 Trying to put down the vigilance of the Russian leadership by talking about disarmament, the United States is actively engaged in modernizing its tactical and strategic weapons in Western Europe ...


Speaking in June of this year in the capital of Germany, US President Barack Obama announced the new initiatives of Washington in the reduction of nuclear weapons. To the delight of thousands of Berliners gathered at the Brandenburg Gate, Obama promised that America would promote the idea of ​​a world free of weapons of mass destruction in every way. In his speech, the head of the White House spoke not only about the need for transatlantic solidarity, but also about how the world is still threatened by nuclear arsenals left over from the days of the Cold War.

However, B. Obama's statements contradict the final resolutions of last year’s NATO summit in Chicago, where a new US-NATO concept on tactical nuclear weapons (TNW) was defined. In June, the 2013 of the year document was approved by Washington. This is the third modification of the nuclear strategy after the end of the Cold War and its first adaptation after 2002, when the United States unilaterally withdrew from the ABM Treaty and began a large-scale deployment of a global system for intercepting ballistic missiles. For the first time, guidance documents stated that existing nuclear forces will have strategic and tactical directions. In order to understand the essence of the “new” American nuclear concept, it is necessary to find out what its consequences may be for the process of ensuring security and stability both on the European continent and on a global scale.

It should be recalled that at present, the total nuclear arsenal of US tactical nuclear weapons is approximately 800 free-fall nuclear bombs (B61-3, B61-4, B-61-10). At the same time, the tactical nuclear forces of NATO are armed with 150-200 YAB type B-61 with a total power of 18 MT, which are located at six air bases in Germany, Italy, Belgium, the Netherlands and Turkey. For their delivery to targets, it is planned to use around the 400 aircraft carrier F-15, F-16 and Tornado-GR.MK.4 from the squadrons of the US and British air forces and aircraft of the above-mentioned countries. The presence of US tactical nuclear weapons on the territory of these states is regulated by bilateral agreements, under which they provide external protection and maintenance of the infrastructure of facilities where the JAB is stored, and also create conditions for the work of special US units in these warehouses.

In order to justify the presence of its nuclear weapons in Europe, despite the end of the “cold war”, the US leadership has constantly stated the increasing political significance of TNW as a tool for conducting regional deterrence policy. In addition, it is regularly claimed that this accommodation ensures the maintenance of political and military ties between the European and North American members of the Alliance. In reality, the focus of such statements is primarily aimed at strengthening the position of the United States as the dominant “leader” in NATO, and also to have a rather formidable argument in relations with Russia.

In this regard, it should be noted that the new concept on tactical nuclear weapons is based on one of the postulates, which was reflected in the US National Nuclear Policy Review, approved by the Congress in April 2010 of the year, in particular on the position that, although the threat of nuclear war has become distant, however, the risk of a nuclear attack has increased. On this basis, far-reaching conclusions are drawn on the need to preserve strategic and tactical nuclear weapons in a very distant future. Also, the nuclear strategy maintains unchanged and significant power potential, which involves nuclear strikes on military targets in order to minimize the possibility of a nuclear strike by a potential adversary.

According to the document in question, the American military-political leadership reserves the right to use nuclear weapons only in extraordinary circumstances. However, in practice it can exercise this right at any time and anywhere in the world to protect the so-called vital interests of the United States, its allies and partners, both in the first and in the response nuclear missile strike. And the armed forces of the country will pursue such a line, as recorded in the report of the American defense ministry, at least throughout the 21st century.

The new nuclear concept also determines the future directions of US tactical nuclear weapons development in Europe. In particular, the document notes the need to maintain tactical fighter carriers of nuclear charges and to extend the service life of the B61 bombs in NATO’s airborne forces, making it possible to use them from F-35 aircraft that will replace the outdated F-16. In this regard, this year it is planned to begin measures to extend the resource use of tactical nuclear weapons with the start of work on their modernization in 2018. Based on the components of the existing nuclear weapons, it is planned to assemble air bombs of type В61-12 with the service life extended to 30 years. In the future, they will be adapted for combat use with a promising multi-purpose aircraft F-35.

Of particular interest is the fact that the start of nuclear modernization was put by the Nobel laureate of the Peace Prize B. Obama, primarily in order to win over Republican senators. In particular, when ratifying the START treaty, the president promised to spend 10 billion in the coming 85 years for the modernization of the US nuclear weapons complex.

Nuclear modernization of the United States, according to its ideologists, involves the revival of old and the construction of new complexes that will modernize the existing and produce new nuclear weapons. The creation of new nuclear forges is expected in Kansas City (Missouri), Oak Rizhge (Tennessee) and Los Alamos (New Mexico) - the symbolic location of the first atomic bomb. All old equipment at these enterprises will be replaced by new ones, and the technology for creating charges will be modernized. Production facilities allow the production of up to 80 nuclear warheads per year. Experts in the field of nuclear weapons unambiguously characterize the goals of the “new modernization”. In particular, one of the prominent figures of the Federation of American Scientists, Hans Christensen, called it no less - the start of a new nuclear era.

It is well known that if a gun hangs on the wall at the beginning of the play, then at the end it should fire. So, it is precisely for such a development of events that Americans are preparing constantly. Special attention is paid to planning the use of tactical nuclear weapons at the European theater of operations, which is carried out by the joint US strategic command. In addition, it is assumed that the command will lead the use of a variety of nuclear strategic and tactical forces and means using an automated system that allows you to quickly perform target distribution and complex attacks, including general-purpose forces. This takes into account the fact that Russia is the only nuclear power capable of destroying the United States.

In addition, the use of tactical nuclear weapons is regularly submitted to the command and staff exercises of US military authorities in Europe. They are held 2-3 once a year and are part of the operational training of these structures. During the command-and-control exercise, questions are being developed on deploying command and control systems and combat systems and wartime communications, organizing the leadership of tactical nuclear forces using an air command center, transferring the US military and allied forces from peacetime to wartime, and preparing nuclear weapons for use.

As the results of the exercise show, in the case of the redeployment of NATO-armed air-borne nuclear-armed aircraft and the delivery of the YAB to advanced airfields in Poland, Slovakia and the Baltic countries, the entire territory of Belarus and almost the entire European part of Russia are within reach. At the same time, the flight time to the object at the western borders of Russia is reduced from 40-50 to 4-7 minutes. In addition, the accuracy of bombing is 40-60 meters, which, taking into account the power, allows bombs of type B-61 to hit almost any objects, including protected ones. Airplanes used can carry several charges, however, to increase combat effectiveness, the main option is considered to be a suspension of no more than two, since the successive execution of tasks by carriers reduces the likelihood of subsequent strikes at one sortie.

And there are plenty of such advanced airfields in Europe among the Americans. In particular, in Poland, according to NATO standards, seven aerodromes are equipped, capable of receiving all types of aircraft. The Lithuanian and Latvian airfields at Zokniai and Lielvarde air bases were modernized accordingly. In addition, the reconstruction of Emari airbase in Estonia was completed last year.

All these facts eloquently indicate that the United States not only stores tactical nuclear weapons in Europe, but is ready to use them and create all the conditions in order to increase combat effectiveness in use. This once again confirms that the statements of American politicians about the reduction of US nuclear reserves are nothing more than a bluff, in order to force Russia to begin reducing its most combat-ready type of armed forces.

Ctrl Enter
Noticed oshЫbku Highlight text and press. Ctrl + Enter
We are
New round of confrontationStrategic Stability in the 21st Century
Military Reviewin Yandex News
Military Reviewin Google News
59 comments
Information
Dear reader, to leave comments on the publication, you must to register.