4 September 2013
101
In China, they believe that nuclear war is better than collapse from the inside


In the production of military equipment of all major classes, except nuclear submarines and aircraft carriers, the Celestial Empire confidently occupies the first place in the world, although the capabilities of its military-industrial complex will be used by up to a third. At the same time, the Chinese practically eliminated the qualitative lag behind the armed forces of the countries of the West and Russia, which took place ten years ago. Even where a certain lag persists, it is not fundamental and is easily compensated by quantitative superiority.

A complete disregard for these facts in Russia is beginning to be in the nature of some kind of collective insanity, which is sometimes aggravated by outright lies about the production of small series of weapons in China, as well as about our remarkable relations. The pro-Chinese lobby in Russia, which is at least not weaker than the pro-American, is very involved in this insanity. Moreover, he has resources in the Russian Federation that the Americans do not have - a huge Chinese diaspora, Chinese special services operating almost unchecked on our territory and a significant number of Russian citizens, who are very high-ranking, long ago purchased by Beijing and ready to sell him absolutely everything. 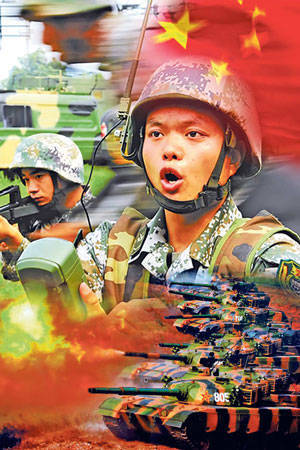 In fact, Russia for 20 has been actively imposing a strategic partnership on Beijing for years, and many of us are seriously convinced that Russian-Chinese relations are exclusive and allied. Meanwhile, the PRC has established a strategic partnership with many countries of the world, including most of the western ones, so Russia’s exclusivity for China is out of the question. Like the union. Throughout all these 20 years, both Chinese officials and Chinese scientists have consistently emphasized that Russian-Chinese relations are not allied and are not directed against anyone. This is Beijing’s firm position, both official and actual.

As for the Chinese threat to us, it is not hypothetical, it is objective. The fact that China will not be able to live without expansion is determined by the laws of nature and economy, and not by any special Chinese aggressiveness. We cannot say in what forms and at what pace it will go, but expansion itself is inevitable. For China, the question is unequivocal - either the seizure of territories and resources, or collapse and civil war.

First, if the PRC reaches the level of per capita consumption of food, electricity, oil, etc., at least comparable to the western, it alone will not have enough resources of the entire planet. This is not a hypothesis, this is a fact. As well as the fact that at the current growth rate of the Chinese economy, this problem will arise in the very foreseeable future, during the life of the overwhelming majority of readers of this article.

Secondly, the overpopulation of the eastern regions of the People's Republic of China creates an unreasonable burden on nature and infrastructure, and attempts to limit population growth are halfway and at the same time lead to insoluble social problems (a brief description needs another large publication).

Therefore, considering the current situation in the PRC, it is impossible not to see that external expansion can be the optimal solution in order to cut the country's Gordian knot of problems. It will provide a significant increase in the territory and quantity of natural resources. For this expansion, there is a huge resource potential in the face of "extra people" (unemployed, young men who are not provided with brides due to the strongest sexual imbalance, poor peasants). Moreover, the very high unemployment among young people and the “shortage of brides” make their own high losses during the fighting not only permissible, but perhaps even desirable for the military-political leadership of the country.

A significant increment of the territory will allow abolishing birth restrictions, which will help, if not completely remove, then substantially alleviate all social contradictions associated with these restrictions (they are truly dramatic and deserve a lot of separate discussion). Objectively speaking, the territory for China is even more important than resources. In any case, significant funds must be spent on the extraction of natural resources in our own or occupied territory or on their acquisition abroad. The territory is an absolute value that cannot be replaced. At the same time, the social problems caused by the overpopulation of the country are much more dangerous for it than the lack of resources and the extremely difficult environmental situation. It is they who lead to a split within society and between society and the government, that is, to delegitimize the power of the CCP. Just because of social problems, the collapse of the Chinese economy is almost inevitable. Accordingly, external expansion becomes an unallocated solution for the Chinese leadership.

The own sparsely populated western part of the country, unfortunately, is not suitable for the normal life of people. Tibet is an extreme highland, where it is impossible for the “lowland” inhabitants who are not adapted to this and cannot live permanently, and moreover any serious economic activity. Xinjiang Uygur Autonomous Region (XUAR) is not much better in this regard. Against the background of these regions, Southern Siberia is incomparably more comfortable and more favorable in all respects. But Southeast Asia, which we a priori proclaim as the main focus of Chinese expansion, is just very small for such an expansion. There is very little territory, few resources (at least much less than in the Asian part of Russia), but there are a lot of local people, moreover, disloyal to Beijing. Therefore, it is not necessary to engage in self-deception, China has only two areas of expansion - Russia (more precisely, its Asian part) and Kazakhstan.

Of course, Beijing would prefer a peaceful option of expansion (demographic and economic), but it may simply not be enough time for it, a critical aggravation of internal contradictions will happen before peaceful expansion yields a practical result. Accordingly, the military option of expansion is absolutely possible. The theoretical base, as historicaland military.

No matter how much official statements sound that China does not have territorial claims to us (mostly, these statements are for some reason heard from Russia itself), but the Aigun and Beijing agreements, on which the current border is established, are officially considered unfair and unequal. In the current international law, such categories simply do not exist. But China will introduce them when it has a little more power.

The borders of the Middle Kingdom in Chinese

With regard to the military component, the concept of strategic borders and living space, which was developed to justify the competence of the Chinese Armed Forces of offensive hostilities, deserves special attention. The newspaper of the Central Political Department of the PLA “Zefanjun Bao” on the border of living space said that it “defines the living space of the state and the country and is connected with the influx and outflow of comprehensive national power”, “reflects the power of the state as a whole and serves the interests of its existence, economy, security and scientific activities. " The concept is based on the view that population growth and limited resources cause natural needs to expand the space to ensure the further economic activity of the state and increase its “natural sphere of existence”. It is assumed that the territorial and spatial boundaries indicate only the limits in which the state with the help of real power can "effectively protect its interests." “Strategic boundaries of living space” should move as the “integrated power of the state” grows. As the same “Zefangjun Bao” wrote, effective control, exercised for a long time over the strategic area, which is carried out beyond the geographical boundaries, will ultimately lead to their transfer. The concept implies the transfer of hostilities from border areas to zones of strategic borders or even beyond them, while the causes of military conflicts can be difficulties in the way of “ensuring China’s legitimate rights and interests in the APR”. China believes that the boundaries of the life space of strong powers go far beyond their legal boundaries, and the sphere of influence of weak countries is smaller than their national territory.

The rapid pumping of the offensive potential of the PLA and the nature of the exercises (they are described in the article “China is ready for a big war”) fit perfectly in this concept.

As for the nuclear deterrence factor, it is redundant against non-nuclear countries, and against nuclear ones (to which, alas, China belongs) is very doubtful. We must not forget about the extremely low sensitivity of the Chinese to losses (this is their fundamental difference from the Western armies). Our trouble is that we earnestly believe in nuclear deterrence, and this greatly hinders the development of conventional armed forces. Nuclear weapon should be the last argument. We ourselves have brought to the state when it is the first and only. At the same time, as was shown in the article “Surprise from China”, in the People's Republic of China they are seriously preparing for a nuclear war. Yes, of course, the Chinese do not want her. But, obviously, they believe that in the extreme case it is permissible, because the collapse of the country from the inside can turn out to be even worse. Moreover, in this case, it will be possible civil war with the use of its own nuclear weapons on its territory.

Alas, our military-political leadership sees a threat to Russia in the territorial claims of Latvia and Estonia, whose armed forces are totally weaker than 76-th dshd. But China is not a threat to our bosses. Frenzy or crime is taking place here - not fundamentally, the result will be one.

Ctrl Enter
Noticed oshЫbku Highlight text and press. Ctrl + Enter
We are
About Stalin and KhrushchevWhat you didn't want to know about England
Military Reviewin Yandex News
Military Reviewin Google News
101 comment
Information
Dear reader, to leave comments on the publication, you must sign in.