Yanukovych and the topic of the famine in Ukraine: the government is different - the ideology is the same 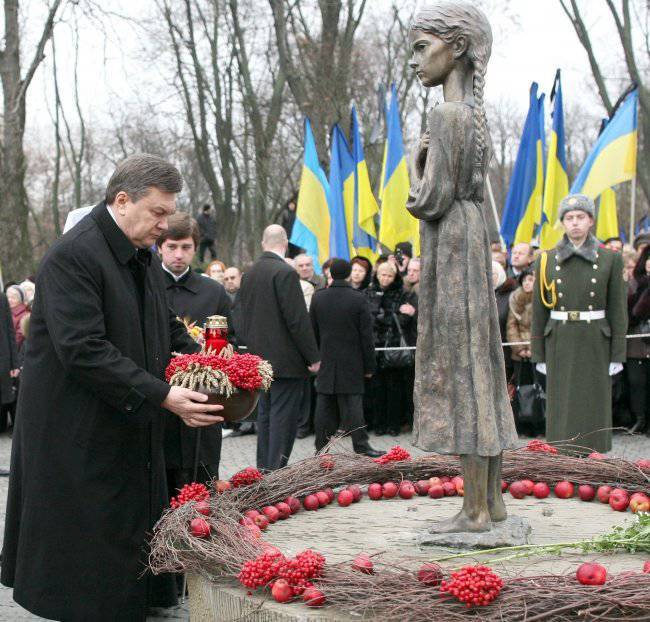 The president and his group of political consultants seemed to have certain problems with the emergence of political ideas, so they decided that it was quite possible to use what had already been used by predecessors. In Ukraine, the topic of the famine, in the sense of the genocide of the Ukrainian people, is raised at the official level. It was just such a concept that Goebbels and then Yushchenko put into it. The current president is not yet ready to use such high-profile definitions, but the events of 1932-1933 no longer consider the general hunger of the Soviet people. Moreover, Yanukovych stressed that this is a national tragedy, and ordered the government to prepare everything necessary for the 80 anniversary of the famine in a month.

Recall, the Day of Remembrance of the Victims of the Holodomor was established by Leonid Kuchma 15 years ago. But this topic has acquired the status of a humanitarian catastrophe already under the presidency of Viktor Yushchenko, who called the Holodomor a targeted act of genocide against the Ukrainian people. At the same time, the Day of Remembrance is a national day of mourning made by Viktor Yanukovych, who signed the necessary document just a few days ago. The decree says that all 24 events in November are planned at the highest state level. Everything is very pathetic, formal, personable and regrettable, with a minute of silence and half-mast flags.

It is likely that opponents of Yanukovych will appreciate such ideological metamorphoses, because we all know very well what this is all about. Anyway, for events of this kind should be prepared in advance, and not in a matter of months. Probably, the president had not previously thought that his popularity would fall so much that he would have to look for new ways to achieve it in an environment alien to him.

According to experts, thus, Yanukovych is trying to get close to the electorate, which not only should like the resuscitation of the Holodomor theme, but also who should see it as “his own” and have no doubts about re-election. It is not by chance that the head of state signed the decree on the eve of the World Congress of Ukrainians, which took place in Lviv at the end of August. By the way, this organization is openly nationalistic and anti-Russian. Moreover, its influence, she clearly exaggerates. However, it can be considered a kind of indicator of pro-Western sentiment. That is why, probably, the president has decided that direct participation in the mourning ceremony will not be enough, and an official document is needed. It is noteworthy that in previous years on Memorial Day, Yanukovych always limited himself exclusively to laying flowers at the memorial to the victims of the Holodomor in the capital.

According to the Ukrainian political scientist Vladimir Skachko, the current head of state in former times was very reserved about the policy of the Holodomor, which cannot be said about the present time. It is clear that the memorable sad date is approaching, and such a revelation emphasizing the national feeling of resentment fits very well into the context of the Ukrainian-Russian relations, in which there has been a significant exacerbation. That is why, the expert believes, nothing else from Yanukovych, who suddenly spoke exclusively in Ukrainian and became a nationalist, cannot be expected.

In fact, the president has begun preparations for the presidential elections scheduled for 2014. It will be a kind of competition, but not between the West and the East, but between patriots and superpatriots. And only those who manage to become a “super-duper patriot” will take the presidency. Thus, according to Skachko, we are already talking about fighting not for something, but against someone: against Russia, and not for modern Ukraine. This technique is well known to most political technologists: having found a convenient enemy, it is very easy to unite to fight against him.

According to Ukrainian political analyst Rostislav Ishchenko, Viktor Yanukovych raised the topic of genocide even earlier, in the spring of 2010. All the changes that have taken place with the head of state at the present time are connected, the political analyst is sure, with the fact that Yanukovych, in fact, became the successor of Viktor Yushchenko’s policy. Despite the fact that the current president’s policy is more moderate, its essence is the same: since joining the European Union was chosen as the foreign policy strategic course and the course towards integration with the Customs Union was rejected, the rhetoric of former opponents who followed the same course is necessary to adopt And the topic of the Holodomor is part of this rhetoric, in fact, as part of the foreign policy.

The same opinion is taken by Bogdan Bezpalko, who holds the position of deputy director of the Center for Ukrainian Studies and Belarusian Studies at Lomonosov Moscow State University. He is sure that V. Yanukovych decided to use frankly the rhetoric, ideological cliches, methods of his predecessor. By and large, in ideological terms, they are not very different from each other, as, indeed, most of the representatives of the Ukrainian political elite. As for the fact that Yanukovych decided to address the topic of the famine right now, the expert says that this is, in the first place, advantageous, especially against the background of the complication of bilateral interstate relations. Moreover, Yanukovych in this matter was supported by a lot of opposition politicians. Thus, Bezpalko stressed, Yanukovych has every chance to use the Holodomor theme to attract new allies and supporters and acquire the image of a real Ukrainian leader and politician.

However, many political scientists believe that the consequences of Yanukovych’s ideological transformations are not very obvious. After all, in essence, the head of state, roughly speaking, plays in a foreign field, and it is completely incomprehensible how not only its traditional voters, but also representatives of western regions will react to its new ideology. However, for the president at the present time, apparently, it is more important to acquire the status of a national leader, and for this it is not a pity neither a rating nor several million dollars allocated by the Ukrainian government to erect a monument to the victims of the Holodomor in Washington.

Ctrl Enter
Noticed oshЫbku Highlight text and press. Ctrl + Enter
We are
Situational analysis of the death of the MH17 flight (Malaysian Boeing 777), made on the basis of engineering analysis from 15.08.2014Bashar al-Assad: In Syria, not the “revolution” that the enemies are talking about, but the revolution of the army and the people against terrorists
Military Reviewin Yandex News
Military Reviewin Google News
246 comments
Information
Dear reader, to leave comments on the publication, you must sign in.