Abkhazia remembers who first came to the rescue 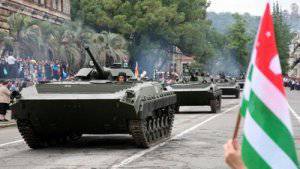 Minister of Defense of the Republic of Abkhazia, Army General Mirab KISHMARIA: Abkhazia remembers who first came to the rescue

- Mirab Borisovich, the formation of the Abkhaz statehood is closely connected with the defense component of the republic. What can be said about the main stages of the development of the armed forces of Abkhazia?

- The question is relevant, because this year we celebrate the 20 anniversary of the victory of the people of Abkhazia in the national war of 1992 – 1993. History The armed forces of the Republic of Abkhazia originates then. In 1992, the Ministry of Defense was created, the first military units and subunits were formed.

These two decades have not been easy for Abkhazia. The status of the republic was not finally determined, the reliable provision of state security remained in question. The Russian peacekeeping forces deployed on the territory of Abkhazia helped us in covering the eastern and southern borders, preventing the penetration of punitive occupational forces into our territory.

At that time our army did not have enough weapons, ammunition, ammunition. Nevertheless, it demonstrated its readiness in August 2008 of the year, preventing the implementation of the aggressive plans of the Georgian side. Over the 20 years, much has changed. Today, the Abkhaz army has everything necessary to protect the republic from possible aggression. Suppose that not the most modern military-technical models are on its armament, but the level of combat training of personnel makes it possible to realize the defensive purpose of our troops to the full.

This was again confirmed by the operation to liberate the Kodori Valley in 2008. The Abkhaz army, faithful to the allied agreements, had intelligence information about plans to invade Georgia after an act of aggression in South Ossetia. We have developed and implemented a plan of pre-emptive strike and defeat of the Kodori group of its regular troops. Then our units encountered trained and well-armed military units, but were able to completely clear the Kodori zone in almost a day. 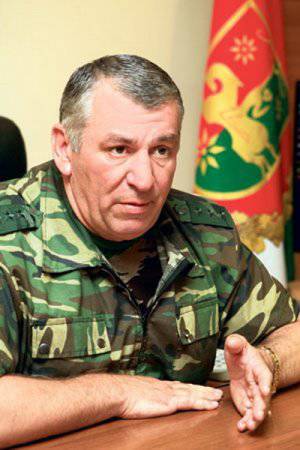 Kishmaria Mirab Borisovich was born in 1961, in the village of Jal, Ochamchira District. He served in the Turkestan military district. After graduating from the Alma-Ata Higher Combined-Arms Command School, he served as a platoon commander, then a company commander of the 162 motorized rifle regiment TurkVO. From June 1987 to February 1989, he participated in the hostilities in Afghanistan as a company commander and deputy commander of a motorized rifle battalion. Subsequently he served in the 5-th motorized rifle division of TurkVO. During the Georgian-Abkhaz conflict, 1992 – 1994 was chief of staff and then commander of the eastern front. In the postwar period, he served in the posts of deputy minister of defense, military commissar of the republic. From 2005, he was appointed First Deputy Minister of Defense of Abkhazia. From 2007 to the present, he is the Republic of Defense Minister. Army General, Hero of Abkhazia, Candidate of Military Sciences.

- What are the armed forces of Abkhazia today?

- 26 August 2008 was the beginning of a new stage in the development of Abkhazia and its armed forces. On the basis of bilateral agreements with Russia, our units received a sufficient amount of military equipment and armaments, and problems of arranging military units and personnel training were solved. Today we have quite powerful artillery, including reactive.

Our aviation able to solve the most difficult tasks in any weather conditions, day or night. Including bombing deep into enemy territory. The country's air defense is modernized and equipped 100 percent. 90 percent updated fleet of automotive equipment. Active modernization of combat vehicles. Our special pride is the units of the army special forces. Great emphasis is placed on their preparation, taking into account the latest global trends.

Our ground forces and the Air Force are equipped with conscription and on a contract basis. Special forces and army posts in the specialties that determine the combat readiness of units are staffed by contract service professionals. These are more mature and militarily trained people. The command school of the Ministry of Defense successfully trains platoon commanders. Taking into account real needs, each issue has its own specialization - artillery, tank or combined arms. We are preparing officers for the remaining necessary military specialties under an agreement on military cooperation with Russia at its military universities.

Preparation of the reserve is carried out in the framework of military training with the conduct of mobilization, command and staff and tactical exercises. They are carried out taking into account seasonal economic work in the country twice a year. During such gatherings, it was often possible to see how the father commanded the tank crew, and the mechanic and the gunner were his sons. There are even whole companies of reservists consisting of blood relatives. Such family continuity is an additional combat potential of our army in case of a military threat.

Today, the generation of fathers is for the most part veterans of the Patriotic War of 1992 – 1993. They know from their own experience how important it is to be able to protect a home with weapons in hand. Therefore, military-patriotic work with young people has a significant family component. From an early age, the boy is given to understand that he is a defender of the Fatherland. Perhaps that is why the military registration and enlistment offices of Abkhazia have no problems with draft dodgers, and we have the opportunity to select one of the best ten candidates for contract service.

- At present, the 7-I Russian military base is deployed in Abkhazia. How does this affect life in the republic?

- The deployment of the Russian compound in Gudauta is the will of the Abkhaz people, implemented by the leadership of the republic in bilateral agreements with the Russian Federation. And although the Russian military base in Abkhazia does not have an official peacekeeping status, its deployment in the republic undoubtedly serves as an important guarantee for the safe development of our sovereign state. Therefore, the attitude of the residents of the republic to the Russian military has developed the most benevolent. I do not recall a single conflict between the military base and representatives of the local population. Residents of Abkhazia well remember that it was a Russian soldier who came to their aid in difficult and dangerous times for the republic.

The level of combat training units 7-th military base gives us good guidelines for the reconciliation of their training plans for the troops. We are learning from our Russian colleagues of the precise organization and discipline of wiring combat vehicle columns both along motorways and off-road. At our request, the base management conducts for the commanders of units and subunits demonstration lessons on methods of logistics and technical support of troops, training of personnel.

In the process of joint use of the Tsabal and Nagualou polygons, the specialists of the Russian base conduct systematic improvement of the training and material base. We, in turn, transferred premises to Tsabala to accommodate Russian subunits that go to the landfill. With the heads of rural administrations, on whose territory polygons are located, an agreement has been reached on providing comprehensive assistance to the Russian military in the development of a training ground base. We have a full understanding with the Russian military and at the command level, and at the level of ordinary soldiers. I would even call this communication companionable. And after the events of 2008, it is safe to say that we have become brothers in arms.

Ctrl Enter
Noticed oshЫbku Highlight text and press. Ctrl + Enter
We are
Nikolay Silaev, Andrei Sushentsov: Georgia after the elections and prospects for Russian-Georgian relationsReligious conflict in Abkhazia? It is possible
Military Reviewin Yandex News
Military Reviewin Google News
40 comments
Information
Dear reader, to leave comments on the publication, you must sign in.