3 September 2013
56
The American company Titan Aerospace has demonstrated a prototype of its solar-powered UAV, which, according to the manufacturer, can stay in the air for up to 5 years. This unit will cruise at an altitude of about 20 thousands of meters and take photographs of the surface or perform the role of an atmospheric satellite. Developers from Titan Aerospace are ready to fly their first aircraft in the 2014 year. It is worth noting that their concept may have a promising future.


Traditional space satellites today are doing quite well with their duties, but they have a number of drawbacks. For example, the satellites themselves are quite expensive, their launch into orbit also costs a considerable amount of money, moreover, they can not be returned back if they have already been commissioned. But the American company Titan Aerospace provides an alternative to space satellites, which will be spared from all these problems. The unmanned high-altitude aerial vehicle called “Solara” is designed to operate as an “atmospheric satellite” —that is, to perform autonomous flights in the upper layers of the Earth’s atmosphere for quite a long time.

The company is currently working on two models of the Solara drone. The first Solara 50 has a wingspan of 50 meters, its length is 15,5 meters, weight is 159 kg., The payload is up to 32 kg. The more massive Solara 60 has a wingspan of 60 meters, it can carry up to 100 kg. payload. The tail of the device and the upper wings are covered with 3 with thousands of solar cells that allow you to generate up to 7 kWh of energy during the day. At its cruising altitude in 20 000 meters, the atmospheric satellite will be above the cloud level, which means it will not be influenced by weather factors. The collected energy will be stored in the onboard lithium-ion batteries in order to power the engine, autopilot, telemetry systems and sensors at night. It is assumed that the atmospheric satellite will be able to work fully offline, being in the upper atmosphere of the Earth before 5 years, and then return to earth, so that its payload can be returned, and the device itself can be disassembled into spare parts. 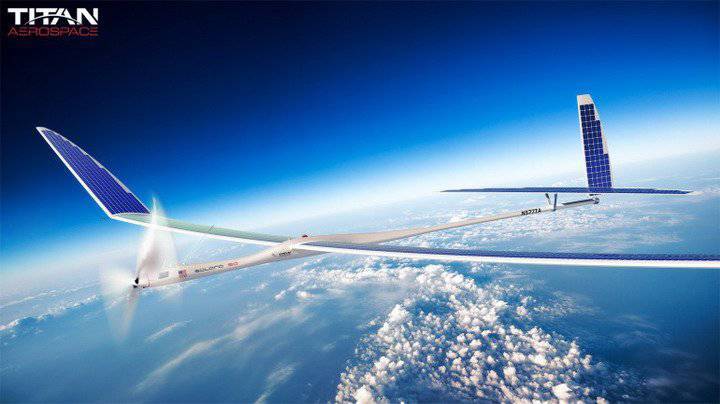 It is reported that the cruising speed of the unmanned vehicle will be of the order of 100 km / h, and the operational radius - more than 4,5 million kilometers. According to experts, the drone for the most part will fly in circles over a certain part of the earth's surface. Such applications include tracking of objects, observation, mapping in real time, as well as monitoring of weather, agricultural crops, forests, places of incidents, and in general practically any tasks that an ordinary low-altitude satellite can handle.

On top of that, Titan Aerospace experts say that every UAV can provide 17 cellular coverage immediately thousands of thousands of square kilometers of the earth’s surface, communicating with more than 100 ground towers. Currently, Americans have already conducted tests of reduced models of atmospheric satellites and are hoping to release full-size versions of the Solara 50 and 60 devices later in the 2013 year.

According to preliminary estimates by experts, multispectral imaging of the earth's surface using Solara devices will cost only 5 dollars per square kilometer: this is just 7 times lower than the rates for satellite data of comparable quality. In addition, such drones will be able to provide telecommunications services for a locality in 30 km radius, which is quite comparable with a modern metropolis like London or Moscow with most of their suburbs. Under normal conditions on the territory of megacities in such a system, there is no need yet, but the company believes that their drones can be useful either in the case of emergency situations or in underdeveloped states. Titan Aerospace says that the well-known computer corporation Google, which can use them as part of its own Internet Africa project, has become interested in their Solara unmanned vehicles. 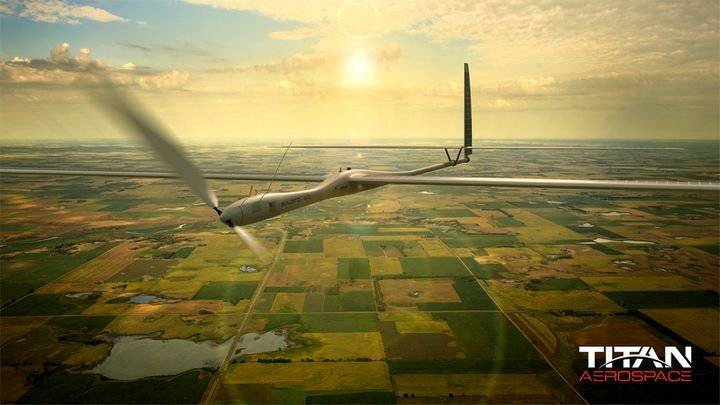 The use of mobile high-altitude vehicles (aerostats or airplanes) for radio broadcasting was proposed quite a long time ago, but the practical application of this idea was hampered by the lack of suitable power sources. The batteries were too heavy, and the solar cells lacked efficiency. The first experimental aircraft, equipped with solar batteries, were designed and built by NASA in 1990-s, it was then that these aircraft and received the unofficial designation - "atmospheric satellites".

To date, two things strengthen Solara as an atmospheric satellite. The first is the height of its flight. The device is designed to fly at an altitude of more than 20 000 meters, which allows it to be almost above all possible atmospheric phenomena. The device hangs over the clouds and a variety of weather conditions, where the environment and wind, as a rule, are fairly stable or at least very predictable. Being at this altitude, the order of 45 000 square kilometers of the earth’s surface immediately hits the field of view of the drone. Therefore, a cellular base station installed on Solara could replace the 100 of such stations on the surface of the Earth.

The second very important thing is that the device is powered by solar energy. All available surfaces on the wings and tail of the drone are covered with special solar panels, and lithium-ion batteries are mounted in the wings. During the day, Solara is able to generate an impressive amount of energy, which is enough to leave a charge in the batteries, which would be enough for the rest of the night. Since the solar-powered unmanned aircraft does not need refueling, it can be airborne for up to 5 years. At this time, he can either circle above one place, or (if you want the device to make long-distance flights) get the opportunity to fly a distance of the order of 4 500 000 kilometers with a cruising speed of slightly less than 60 nodes (about 111 km / h). In this case, the five-year period of flight of the device is due only to the life cycle of some of its components, so there are all the prerequisites to ensure that this drone could be in the sky much longer. 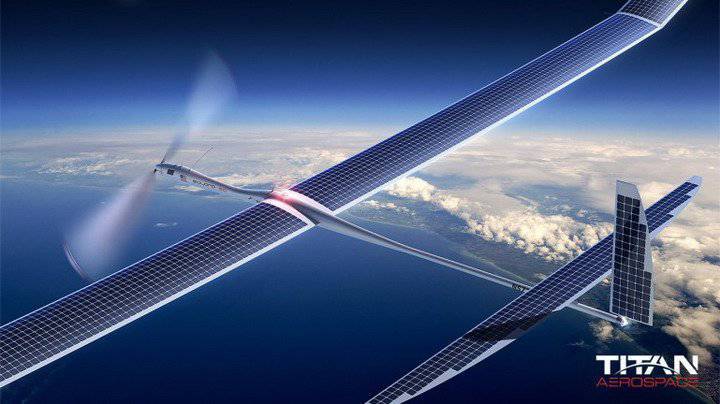 Equally important is the return of the device. If something goes wrong, you can always bring it back, saving the payload and the unit. Solara also promises to be much cheaper than classic satellites, although the manufacturer has not yet been in a hurry to disclose prices for its new product. The launch of such devices into mass production opens up new possibilities for humanity like the regional Internet or Google Maps with real-time maps. At the same time, the appearance of the Solara drone does not mark the end of the era of space satellites, although it gives us a choice of a larger number of alternatives.