Small arms of the USSR: submachine guns of the Great Patriotic War

3 September 2013
62
For many submachine guns, which were used by Soviet soldiers on the battlefields of the Great Patriotic War, these are primarily Shpagin submachine guns - the famous PCA. However, in the Soviet Union during the war years other models of automatic weapons. First of all, we are talking about pistols, machine guns of the Degtyarev system (PPD) and pistols, machine guns of the Sudayev system (PPS). During the war years, submachine guns were released in millions of batches; bullets and cartridges from them still lie on every square kilometer of the liberated territory of the former USSR, as well as countries of Eastern Europe. Soviet sub-machine guns lead wave washed away all the fascists and their allies from the occupied territories and put an end to stories "Thousand years" of the Third Reich.


It so happened that the submachine gun very successfully combined both the need to saturate military units with automatic weapons, and the weak technical training of most Soviet infantrymen and the low technological level of most of the Soviet weapons factories. It is worth noting that the first attempts to create a submachine gun, which was to become a mass weapon of an infantryman, were made in 1927 by the famous designer Fedor Tokarev, who presented his “lightweight carbine” to the military. It may be noted such a curious fact. In the sector store of his automatic carbine, the designer placed special openings through which it was possible to very easily control the number of cartridges remaining in it.

It was only after so many years (decades passed) that other gunsmiths decided to return to such a decision. In addition, the development of Tokarev was distinguished by the presence of a slide delay, which, by the way, appeared only on the most recent AK version. However, the machine gun, which became a real symbol of the entire Red Army during the Great Patriotic War, was developed by the designer Georgy Semenovich Shpagin - the famous PCA, which he developed in 1940 and was in service with the army before the beginning of the 1950-s, and in some The rear units and abroad PPSh could be found almost until the very end of the XX century. 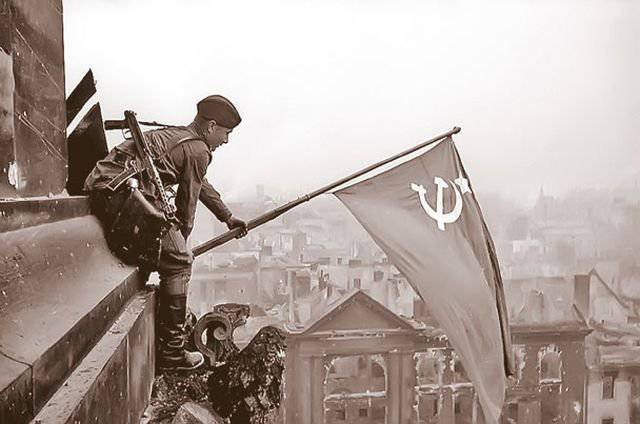 The predecessor of the legendary PPSH was the Degtyarev submachine gun of 1934 design of the year. Unfortunately, due to an erroneous assessment and judgments, submachine guns by the then military theorists, who were for the most part former colonels and generals of the royal General Staff, were considered a purely auxiliary type of weapon. Therefore, until the 1939 of the year, there was an insignificantly small number of these machine pistols — a total of 5084. And in February 1939, PPD-34 were not only removed from service by the Red Army, but even withdrawn from the troops.

It took the bitter lesson of the Soviet-Finnish war, when a lot of troubles of the Red Army were delivered by Finnish soldiers, who were armed with Suomi machine guns designed by A. Lahti arr. 1931 of the year. This model was equipped with shops on the 20 and 71 cartridge. As a result, the Degtyarev submachine gun quickly returned to the troops, moreover, mass production was launched in the USSR. In total, 1940 produced PPD-81118 models in 40, which made this modification the most popular.

The submachine gun Degtyarev (PPD) was developed in the first half of the 1930-s. In 1935, he was adopted by the Red Army under the designation PPD-34. This submachine gun was a typical system that can be attributed to the first generation. It had a wooden bed, and metalworking was widely used in its production. Due to the short-sightedness of command, this development was used mainly in the border units of the NKVD. However, the Finnish conflict changed everything and just before the Great Patriotic War, in the year 1940, PPD has been improved, the new model was designated PPD-40. 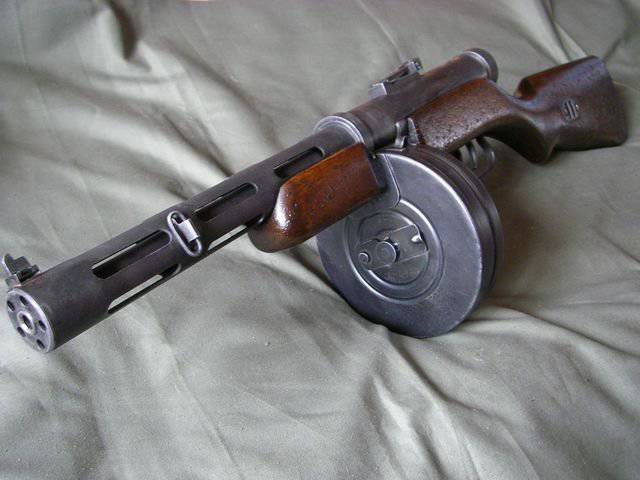 PPD-40 was built on the basis of automation with a free gate. Fire from it is conducted from the open shutter. The barrel of a submachine gun was enclosed in a steel round casing, a wooden box. On the early 1934 and 1934 / 38 models, the box was solid, on the 1940 model of the year - split, with a cutout for the store's receiver. A submachine gun could use 2 type stores: a drum cartridge for the 71 or a box horn for 25 cartridges. Drum shops in the USSR were created from the experience gained during the Winter War with Finland. To a large extent, it was copying the shops of the Finnish SuomiM / 31 submachine gun.

Drum stores for PPD-34 and 34 / 38 had a protruding neck, which was inserted into the store's receiver, hidden in a wooden box. At the same time, stores drum RPM-40 such features have not, increasing the reliability and power knot strength cartridges. All RPMs were equipped with sector sights, which were marked up to 500 meters. The manual safety device was on the cocking handle and could lock the valve in the rear (cocked) or forward position. The infantryman also had access to the choice of fire mode (automatic or single shots), which could be accomplished with the help of a rotary flag, which was located in front of the trigger guard on the right side.

Degtyarev submachine guns were used at the beginning of World War II, but by the end of 1941, they began to be replaced in the troops with a more reliable, sophisticated and much more technologically advanced PCF production. Shpagin submachine gun was originally designed for the possibility of mass production at any industrial enterprise in the country that has even low-power press equipment, which turned out to be very useful in the context of a major war. PPSH was much easier to manufacture, which predetermined the fate of the PPD.

Pittolet-machine gun design Shpagina PPSH-41 was developed in 1941 year, it was created to replace the rather complex and expensive to manufacture PPD-40. In 1941, PPSh was adopted by the Red Army. This model was a cheap and easy to manufacture small arms, which were produced throughout the war. A total of about 6 million PCA-41 units were produced. 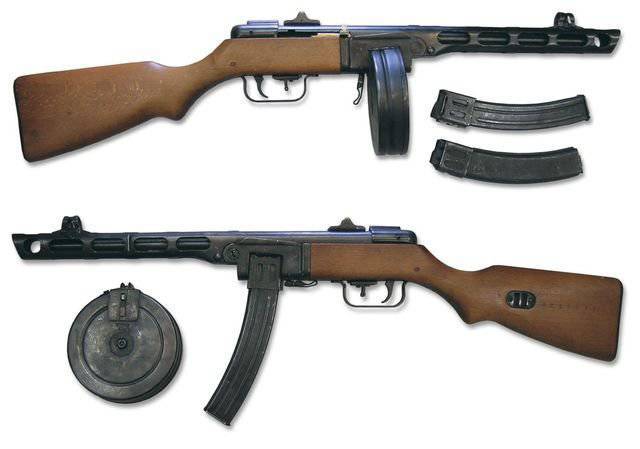 Technically, PPSH-41 is an automatic weapon built on the principle of the free shutter. The fire was fired from the rear sear (from the open bolt). Drummer was fixedly mounted on the mirror shutter. The switch of fire modes (automatic fire / single shooting) was located inside the trigger guard, directly in front of the trigger.
The fuse was made in the form of a slide on the cocking handle; it could lock the bolt in the front or rear position. The casing of the barrel and the bolt box were stamped, made of steel, the front of the barrel casing protruded by the muzzle and was the muzzle brake compensator. The stock of a wooden submachine gun was most often made of birch.

Initially, it was believed that the PCN had a special firepower attached to the drum shops on the 71 cartridge, which ensured a high density of fire and a rare change of magazine. But such shops were notable for their complex construction, high cost of production and a large number of failures in work, which led to the fact that in the 1942 year, the PPSh began to be equipped with sector stores for 35 cartridges that were similar to what was previously used at PPD-40, and in the future and on almost all samples of domestic weapons.

The PCA sights initially included a fixed front sight and a sector sight, and later - a special reversible L-shaped rear sight with installations on 100 and 200 meters. The undeniable advantages of PPSH include simplicity and low cost of construction, high effective firing range, high rate of firing; one of the drawbacks is the large weight of the model, as well as the tendency to involuntary shots in the event of a machine gun falling on hard surfaces. 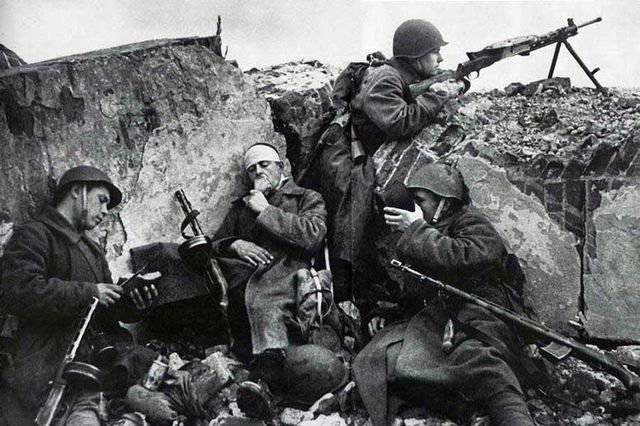 Unlike many models of Allied and Wehrmacht submachine guns, the PCA used a smaller caliber pistol bullet (7,62-mm versus German 9-mm). It possessed a higher initial flight speed, which allowed firing at single ammunition to fire at a distance of up to 300 meters, which fully covered the needs of stripping trenches or urban combat.

The low requirements that were imposed on the processing equipment during the production of the PCA, led to the fact that the PCA-41 was manufactured even in Soviet partisan detachments. The successful design of this small arms was also noted by the Germans, who reworked the captured PCA for their 9x19 “Parabellum” cartridge. In total, at least 10 of thousands of such submachine guns were produced. Modifications of German origin, as well as the captured PCA not hesitate to use the soldiers of the elite German units, e.g. Vaffen-MOP. There are a large number of photographs, which captured the German grenadiers, armed with Soviet PCA.

Despite the fact that PCA-41 was pretty simple in the production - its production is still required the presence of a complex metal-cutting equipment. In addition, with all its undeniable advantages, it was too heavy and cumbersome to use in the conditions of narrow trenches or enclosed spaces. He also did not suit the scouts, paratroopers, tankers. Therefore, already in 1942, the Red Army announced the requirements for a new submachine gun, which was supposed to be smaller and lighter than the PCA. As a result, the designer Alexey Sudaevym in besieged Leningrad fascists was designed submachine gun PPS-42 original design. At the end of 1942, this model was put into service. 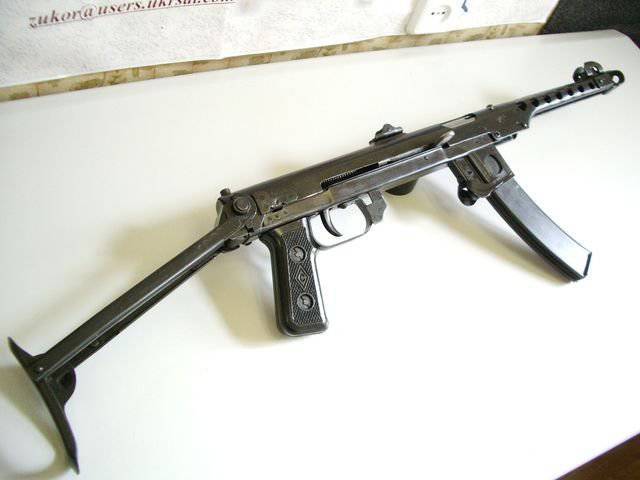 Technically, the Soudaev submachine gun was a small arms, which was built according to the scheme with a free gate and firing from the rear sear (from the open gate). Firing mode - only automatic. The fuse was in front of the trigger guard and blocked the trigger pull. The stem box was made by cold forging of steel and was one with the barrel casing. PPS was equipped with a muzzle brake-compensator of the simplest design. For disassembly, the receiver “breaks” forward-down along the axis located in front of the store's receiver. The sighting device constituted rocker pillar calculated at a range in 100 and 200 meters and fixed fly. PPS was equipped with a folding butt, which was made of steel. Box stores sector stores with 35 cartridges were used as stores. They were not interchangeable with PCA stores.

In addition to ease of manufacture, the PPS also had a folding butt, which made it an irreplaceable model of small arms to arm reconnaissance crews and various combat vehicles. In 1943, Sudayev’s product was modernized and manufactured in this form until 1945. In total, during the war years, about half a million PPPs of both models were produced. After the war, this submachine gun is very well supplied for export pro-Soviet states and movements (including China and North Korea). Often it was the PPS-43 that was recognized as the best submachine gun of the Second World War.