3 September 2013
5
The Alvis FV107 Scimitar is a UK light reconnaissance tank, often referred to as Combat Vehicle Reconnaissance (combat reconnaissance vehicle, BRM). The internal pass-through system of the British armored vehicles is designated FV107 and is a modification of the BRM FV101 Scorpion (Scorpio). 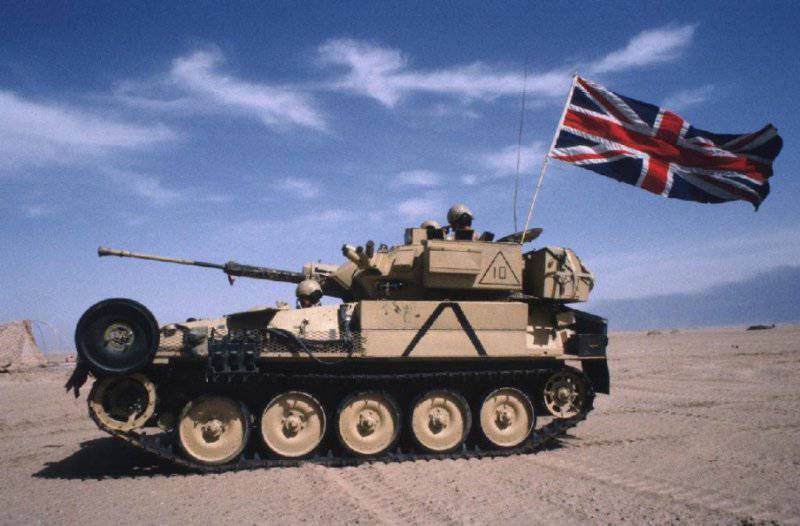 Serial production was carried out in the period from 1970 to 1996 years in the factories of Belgium and the UK. During this period, more than 1800 machines were released in various versions, the main difference of which was in armament. FV107 Scimitar belonged to the fastest tracked combat vehicles of the time. Maneuverability and speed is achieved due to small size (length of 4,39 meter, width of 2,18 meter, height of the periscope 2,1 meter) and weight (weight in combat equipment 7,8 tons). Combat reconnaissance vehicle FV107 Scimitar is transported by many heavy helicopters and military transport aircraft. Yatagan is in service with the army of Great Britain. Used in the Falkland War, the wars in Afghanistan and the Persian Gulf, as well as in peacekeeping operations. FV107 Scimitar has been exported to some countries and currently remains in service with the 18 of them.

Light reconnaissance tower and hull tank FV107 Scimitar are welded from aluminum armor alloy. Frontal parts are capable of withstanding a shot from a distance of 200 meters with armor-piercing bullets of 14,5 mm caliber, sides and aft - from any firing range of 7,62 mm caliber bullets, and also from fragments of 105 mm caliber shells at a distance of more than 30 meters. Accurate data on the tilt angles and thickness of the armor are not published in open sources, however, there is evidence that the thickness of the armor ranges from 20 to 60 millimeters. The machine has a filter-ventilation unit, which provides protection for crew members from radioactive dust and chemical poisonous substances. 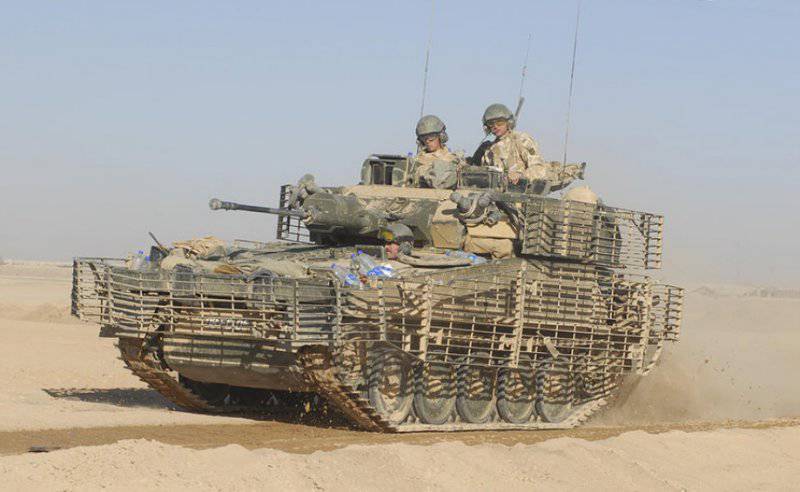 In non-combat conditions, the driver monitors the terrain through the hatch, giving him a free overview of the terrain, although such an arrangement virtually eliminates the observation of the instrument panel, located on the left side of the machine in the depths of the control compartment. In combat conditions, the driver uses a periscope observation device with limited visibility. For driving in conditions of limited visibility or in the dark, it is replaced by a passive night vision device.

A periscopic sight and two periscopic observation devices are used to observe the terrain of the gunner, providing a combined overview of the forward hemisphere. For observation at night there is a night sight. The commander of the BRM FV107 Scimitar has a rotary periscope device with variable x1 or x10 magnification and seven fixed periscopic devices, giving a circular view. The commander does not have his own night vision device. 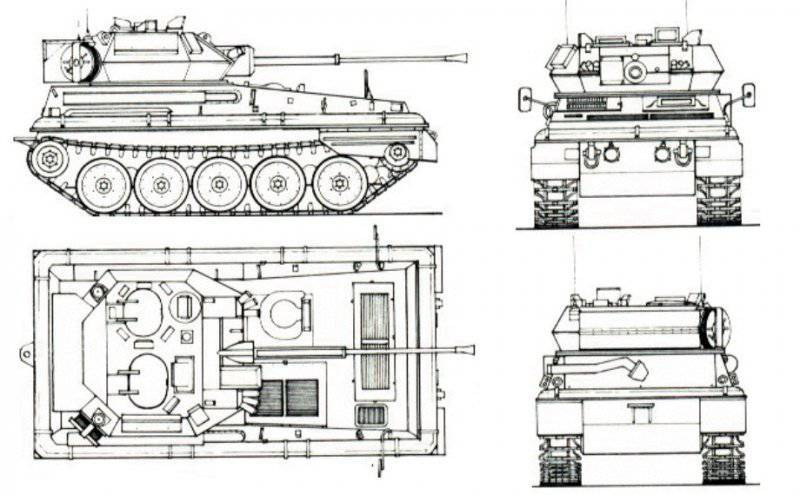 The power plant is a gasoline 6-cylinder Jaguar engine with a power of 143 kW of liquid cooling. The planetary mechanical transmission has a differential turning mechanism. The gearbox is provided with 7 front and 7 reverse gears. On the device, it is similar to the transmission of the tank "Chieftain", but it is significantly less in weight and dimensions. Individual torsion bar suspension with hydraulic shock absorbers on the rear and front nodes. Five (on board) rubberized gable rollers and balancers are made of aluminum alloy. Steel tracks, tracks with rubber-metal hinges. To reduce noise, the drive wheels and tracks have a polyurethane coating, and for fan cooling of the power plant a mixed semi-axial-centrifugal flow is used.

The machine can overcome water obstacles with the help of an individual watercraft, which is a folding screen of waterproof elastic material that extends upward along the perimeter of the hull. They provide the necessary reserve of buoyancy. The speed of 7 km / h afloat is achieved by rewinding the tracks.

BRM FV107 Scimitar is easily recognized by the characteristic tower. As weapons serve long-barreled automatic 30-millimeter gun L21 RARDEN and paired 7,62-millimeter machine gun. The same tower was installed on the Fox wheel reconnaissance vehicle. The L21 RARDEN gun was developed specifically to destroy lightly armored objects (infantry fighting vehicles and armored personnel carriers). Shooting from a cannon can be conducted not only with single shots, but also with bursts, with the maximum rate of fire being 80 rounds per minute. Double band feed allows the gunner, depending on the situation to quickly change the used ammunition. In the vertical plane, the weapon is induced in the sector from -10 to + 40 degrees. 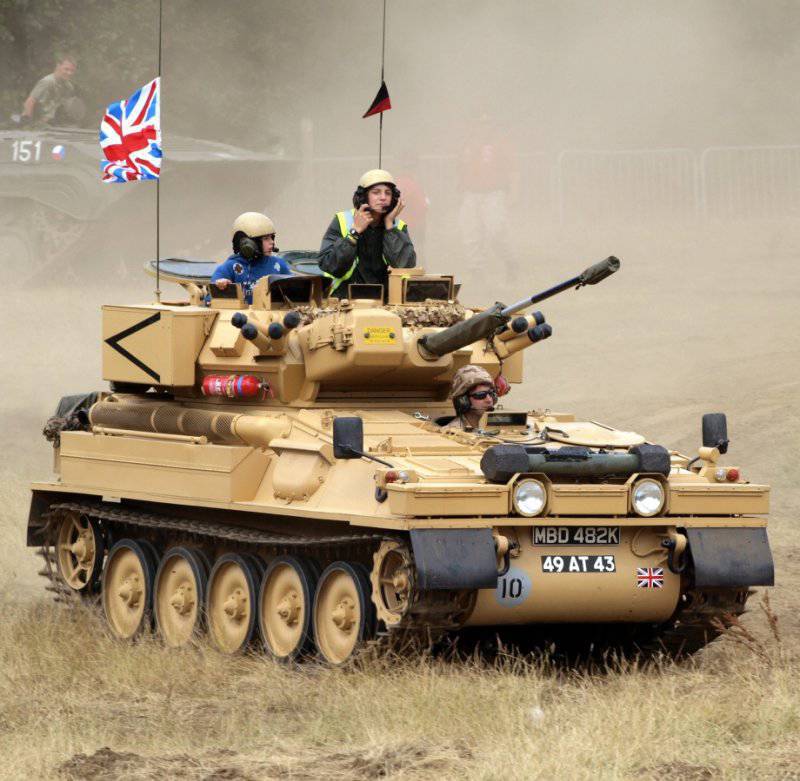 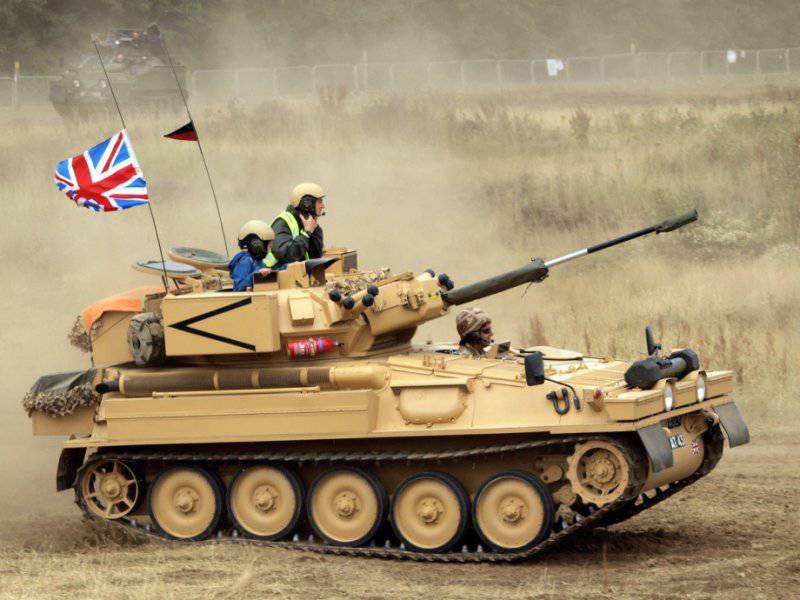 The ammunition includes 165 high-explosive fragmentation shots and sub-caliber armor-piercing shells with a separating pan and 3000 ammunition. The initial speed of an armor-piercing projectile is 1200 meters per second, and at a distance of 1500 meters it punches a steel 40-mm armor plate located at an angle of 45 degrees. On the sides of the tower for the production of smoke screens installed two four-grenade launcher.

In addition to the FV107 Scimitar, the family of machines includes the FV101 Scorpion (basic version, armed with 23 mm caliber L1A76 cannon) and Saber (also armed with the L21A1 cannon mounted in a Fox armored turret). 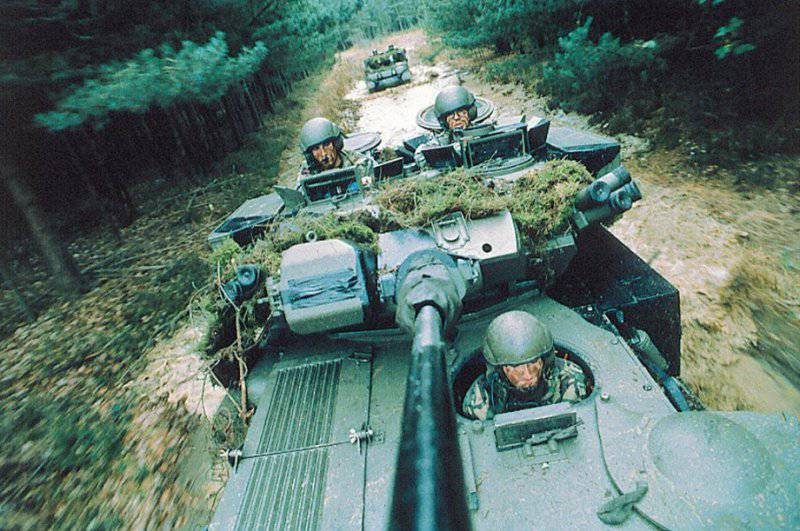 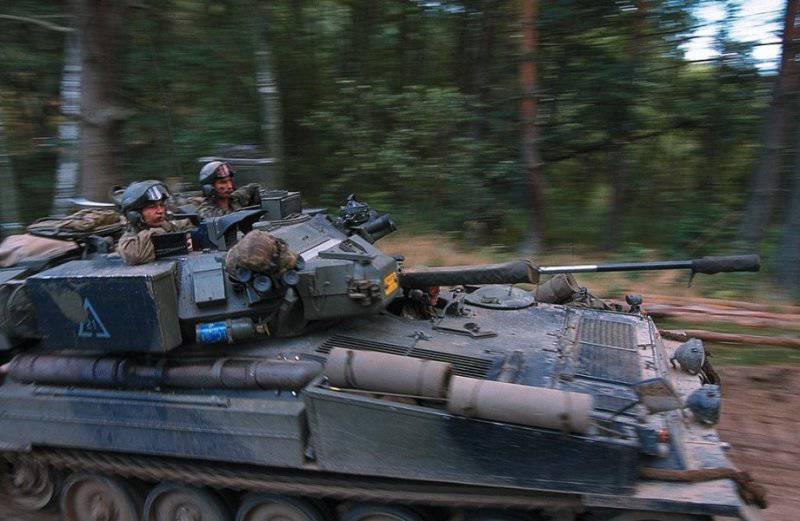 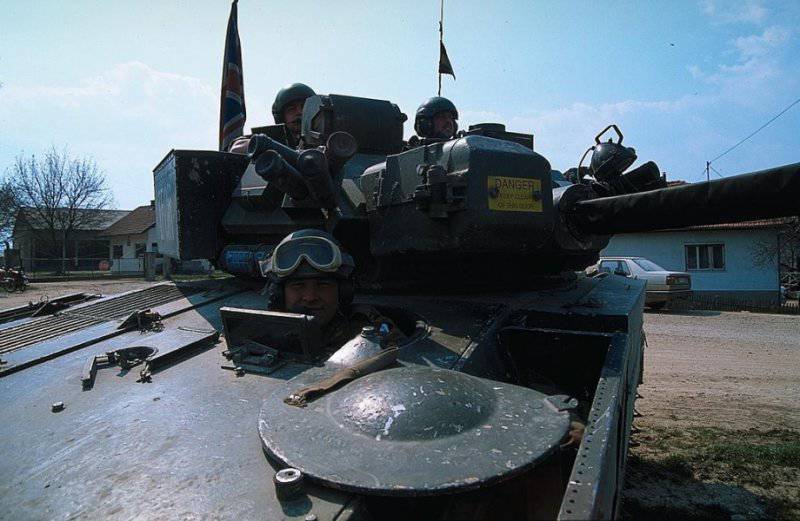 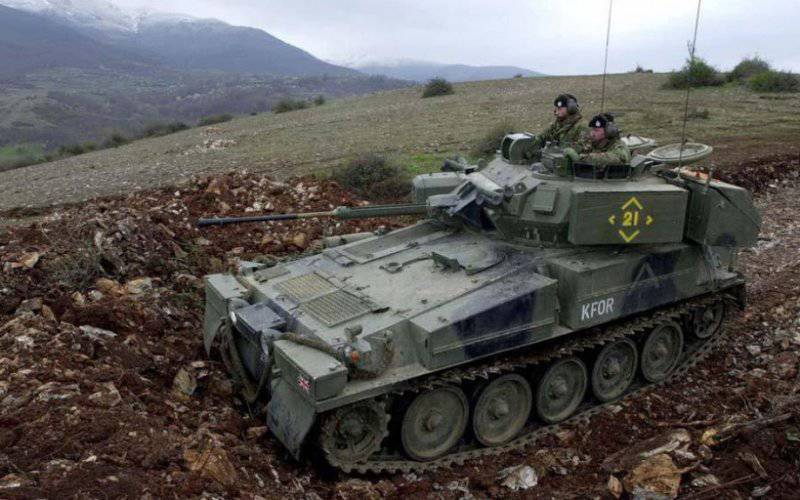 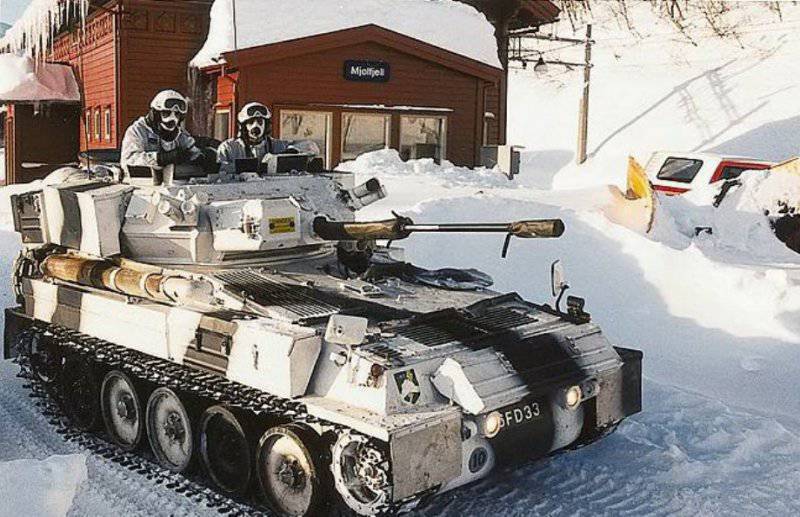 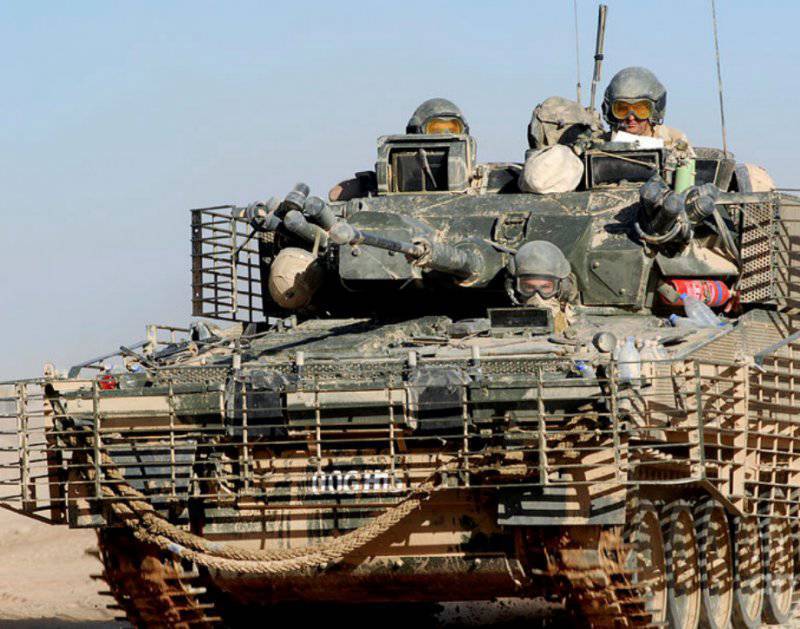 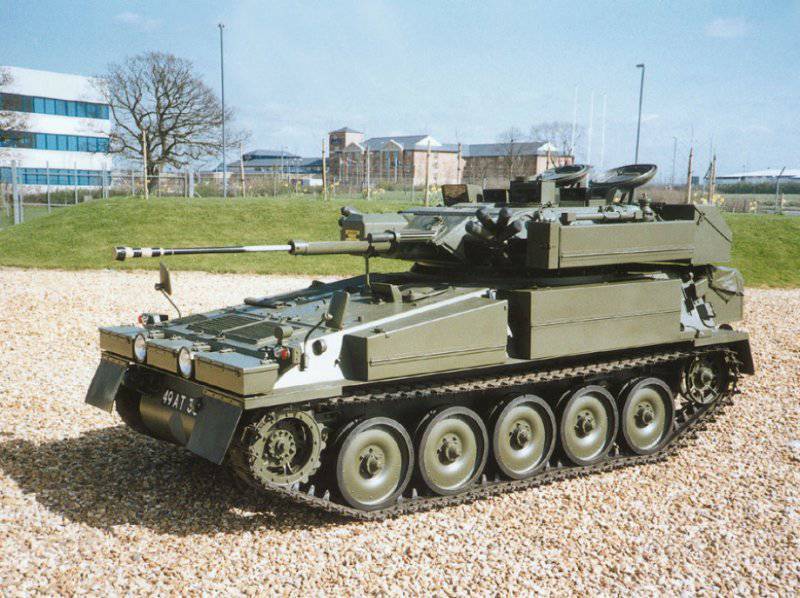 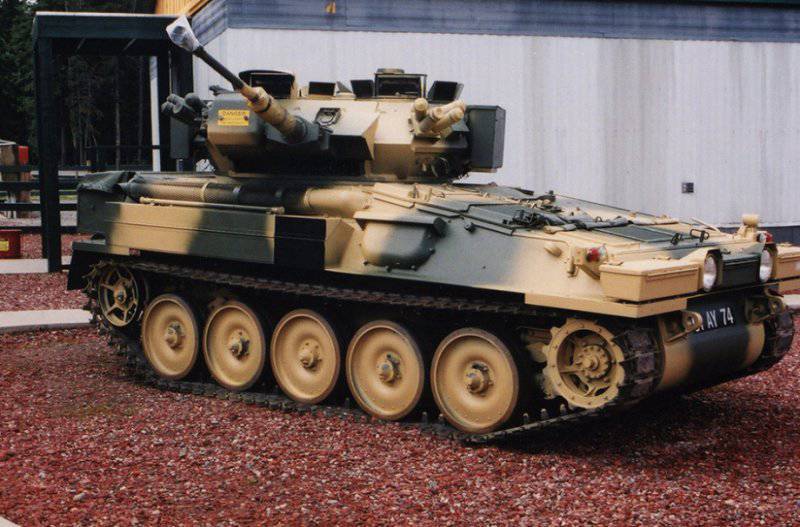 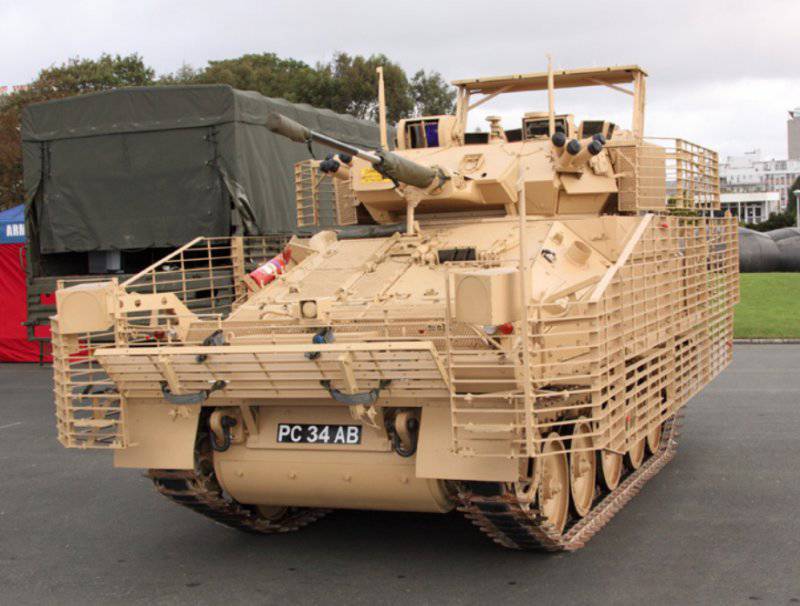 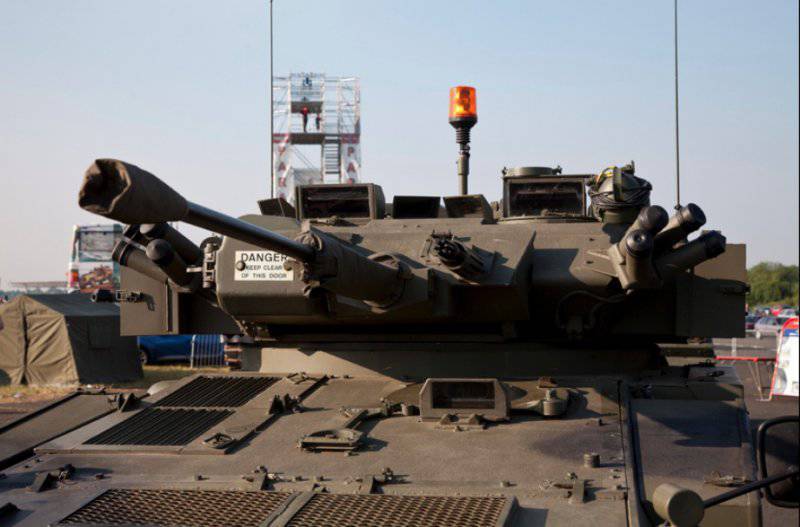