4 September 2013
7
In 2010, at the French exhibition of arms and military equipment EuroSatory, the South African branch of BAE Systems presented its new development - the TRT combat module (Tactical Remote Turret - “Tactical remote controlled turret”). Relying on a large number of contracts from different countries, the designers of BAE Systems Land Systems South Africa laid in the design the possibility of changing the composition of weapons and aiming equipment. Thanks to this, the combat module can be equipped with a fairly wide range of various weapons and aiming systems produced in several countries. 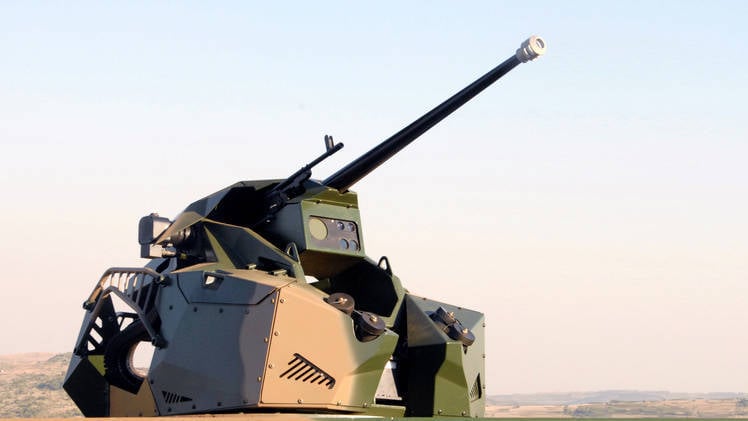 All modifications of the TRT tower, despite the different weapons, are equipped with a unified set of electronic sighting equipment. During the first demonstration in 2010, it was asserted that the unification of the combat modules in design would reach 70%, and in electronics it would reach 95%. This means that most of the elements of the complex are made with regard to the possibility of using various weapons. To create a combat module of a specific model, it is necessary to install only a small number of parts and instruments on a common base, and also to mount the corresponding equipment. This feature of the project has a beneficial effect on its economic side, and in the near future may affect the number of customers.

Shown three years ago at the exhibition in Satori, the sample of the “tactical turret” TRT was a combat module of the TRT-B25 model. An additional index after the hyphen stands for Bushmaster 25 mm. Hoping to attract the attention of developed countries of Western Europe and other regions, South African gunsmiths equipped the first version of the TRT module with an automatic gun manufactured by the American company ATK. This gun uses standard NATO projectiles 25x137 mm, which, as expected, should have attracted the attention of a number of countries that already exploit similar weapons. In addition, practically any machine gun using 7,62x51 mm NATO cartridges can be mounted on the turret.

The TRT-B25 combat module was tested on the stand and on several armored vehicles. Separately, it is worth noting that during the tests the tower with the 25-mm gun was mounted on wheeled armored vehicles with formulas from 4 XX4 to 8 XX8. This fact shows the versatility of a promising weapon system. Among other things, this versatility is due to the weight of the TRT complex. Depending on the configuration, the combat module can weigh from 900 to 1800 kg. Versions with different weights are distinguished by a specific set of weapons, protection and size of ammunition boxes.

When creating the TRT module, an interesting approach was taken to the layout of the aggregates. Part of the equipment of the tower is located in a large unit, mounted on the chase. The second unit is hinged to it, in which the gun cradle is located, the ammunition supply systems, as well as sighting equipment. The division of the tower into two parts made it possible to solve the problem of placing one or another weapon in a limited volume of the combat module: if necessary, only the upper swinging unit should be refined. The lower swivel block, in turn, remains the same. Depending on the wishes of a particular customer, units of the TRT combat module can be covered with additional reservations. 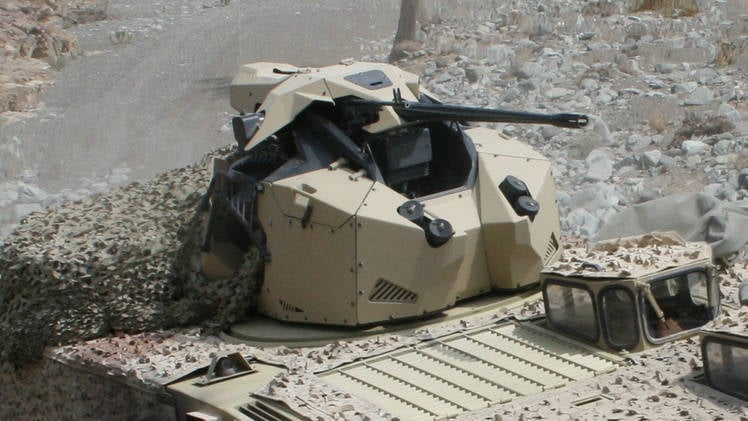 The composition of the sighting equipment may also vary in accordance with customer requirements. The recommended set of optical-electronic systems is as follows: optical-electronic sight, which allows to identify targets at a distance of up to three kilometers by day and one and a half at night; three video cameras; thermal imager with sufficient detection range and laser range finder. All this equipment is proposed to be placed on a stabilized system of fastenings on the upper block of the combat module, next to the gun. The signal from the cameras and the thermal imager, as well as the data from the laser rangefinder, are transmitted inside the armored housing of the combat vehicle to the control station. The tower operator controls the equipment and weapons, observing the situation with the help of a liquid crystal screen.

In the field of weapons for infantry fighting vehicles and armored personnel carriers, there is currently a tendency towards a gradual increase in the caliber of weapons. Trying to meet this demand, BAE Systems Land Systems South Africa created at once two variants of the TRT combat module, designed for automatic guns of the 30 caliber of millimeters.

The first of these is called the TRT-N30 (N-NATO) and is designed to install 30-mm guns ATK Mk 44 Bushmaster II. This gun is designed to use standard NATO shells 30x137 mm. A place for a machine gun allows you to install a rifle caliber weapon. The composition of the equipment of the TRT-N30 combat module is almost completely analogous to the basic set of electronics of the TRT and can also be modified to meet the wishes of the customer. The combat module version with the 30-mm Mk44 cannon is primarily intended for countries using NATO-type ammunition.

Unfortunately for some customers, the modification of the TRT-N90 tower falls under a number of US regulations for the sale of guns to third countries. Because of this, not everyone can be willing to arm their armored vehicles with combat modules with the Mk44 Bushmaster II cannon. To meet the needs of customers who do not have the ability to purchase a turret with such weapons, South African gunsmiths have developed another version of the TRT, also equipped with a 30 caliber millimeter gun.

The TRT-R30 turret (R-Russian) is equipped with a Russian-made 2A42 automatic cannon and a PKT 7,62-mm machine gun. Russian guns using 30x165 mm shells are expected to be able to provide the TRT combat module with sufficient popularity in countries that have small-caliber artillery of Soviet and Russian production. This will allow potential customers to unify weapons and ammunition with infantry combat vehicles already in use. 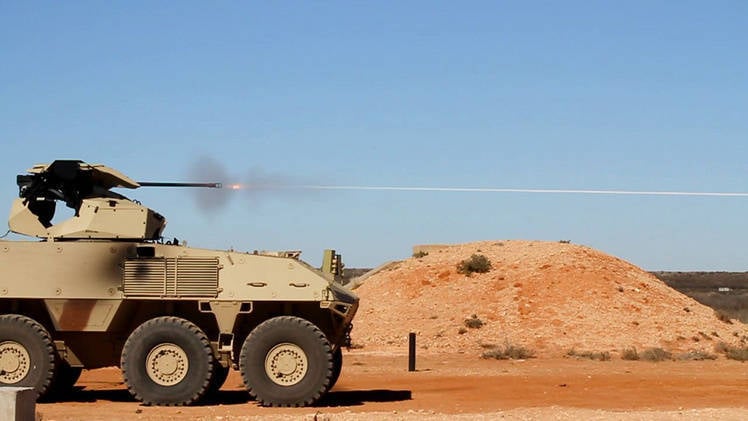 The development of the combat module with the Russian 30-mm 2A42 gun was the project TRT-R30MX (also the designation TRT-R30MK is also encountered). From the base TRT-R30 new version is characterized by the presence of anti-tank missile system. On the TRT-R30MX turret, you can install two transport-launch containers with the “Konkurs” or “Kornet-E” missiles, and the electronic equipment contains relevant components. Probably, this modification of the combat module can also use other anti-tank missile systems. However, the focus of TRT-R30 on specific customers, expressed in the use of Russian weapons, so far limits the list of possible anti-tank systems only produced in Russia.

There is information about the testing of a ready-made TRT-R30 combat module with Russian weapons. In addition, as reported, the combat vehicle with such a tower has already been demonstrated to potential customers from a certain Middle Eastern country. In the factory tests of the TRT-R30 turret, iKlwa (deep modernization of the Ratel armored personnel carrier) and RG41 vehicles were used as weapons carriers. In addition, the company Tawazun (United Arab Emirates) this year showed a new version of the armored car Nimr, armed with a combat module TRT-R30MX. It is interesting to place the units of the combat module on this armored car: the tower was installed on the rear platform, and the control system was mounted in the cockpit. According to reports, the prototype of the new machine from the UAE has already been tested and pilot operation in the armed forces. 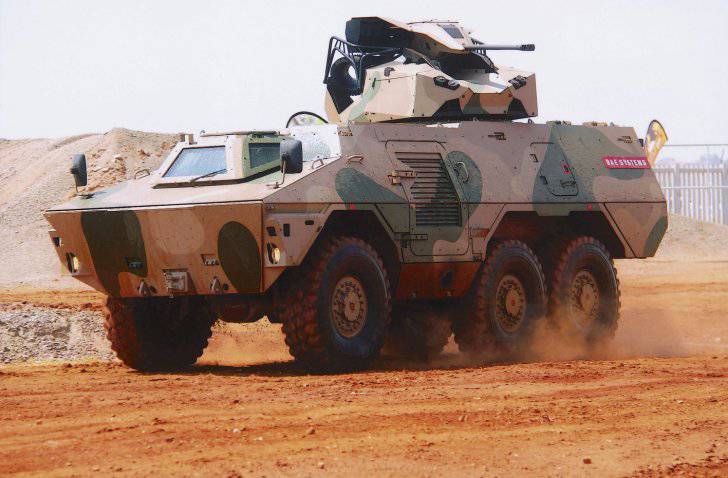 The relatively low cost, a large selection of weapons options or sighting equipment, as well as the ability to install a large number of combat vehicles promise the TRT module a great future. However, to date, even three years after its first show, the towers of the new family have not yet received wide distribution. For the time being, the use of South African Tactical Remotely Controlled Turrets is limited to experimental machines only. However, the first large orders can be signed as soon as possible.

Ctrl Enter
Noticed oshЫbku Highlight text and press. Ctrl + Enter
We are
Fire power for all occasions. Overview of combat modules and towers for cars of light and medium weight categories (3 part from 5)On the roof: status and trends in the field of remotely controlled combat modules
Military Reviewin Yandex News
Military Reviewin Google News
7 comments
Information
Dear reader, to leave comments on the publication, you must to register.