3 September 2013
69
Over the coming months, the fleet of strategic missile forces will be replenished with new-type combat vehicles. This time, the rocket men will receive not a self-propelled launcher or machine, designed to provide combat duty, but a representative of a new class for our armed forces. Combat anti-sabotage machine (BPDM) "Typhoon-M" is designed to protect mobile missile systems and bases with launch mines. 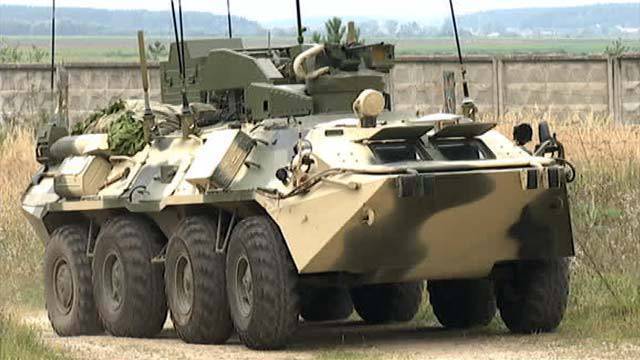 The development of a new technology project began in the late nineties, but it reached the stage of mass production development only after almost a decade and a half. During this time, the main features of the project were changed several times. So, for example, the original version of BPDM called “Typhoon” was planned to be built on the basis of the chassis and body of the BTR-80 armored personnel carrier. In the future, the development of the anti-sabotage vehicle project led to the fact that a new base in the form of the BTR-82 was selected for the Typhoon-M vehicle. However, much more changes in the course of development and updating have undergone a complex of electronic equipment.

Unfortunately, for obvious reasons, at the moment most of the information about the project "Typhoon-M" is closed. Nonetheless, some information has already been shared, which makes it possible to create an approximate picture that describes the design, equipment and capabilities of the new BPDM with sufficient accuracy.

The project of the new military anti-sabotage machine "Typhoon-M" was developed by the Tula research and production association "Strela" from 2007 of the year. According to some sources, the design work on the project was completed in 2011 year. Soon the construction of the first prototype of the promising BPDM began. Approximately in 2012, the first copy of Typhoon-M was put to the test.

The Typhoon-M car has several notable differences from the base armored personnel carrier BTR-82. Firstly, instead of the original turret of an armored personnel carrier, a relatively small remotely controlled turret with a PKT machine gun was installed on the anti-sabotage machine, and secondly, a significant part of the roof of the hull is occupied by additional equipment placed in several metal units of box-shaped and complex polyhedral shape.

In the units mounted on the roof of the armored vehicle there is a part of the equipment for observation and communication. Radio and optoelectronic complex provides confident observation of the surrounding space regardless of weather conditions and time of day. It includes surveillance systems with optical and thermal channels, as well as, presumably, a radar station. Part of the surveillance system is located on the lifting mast. According to available data, BPMD “Typhoon-M” is able to detect equipment at a distance of 6 kilometers, a person at half the distance. In addition, as reported in the media, the anti-sabotage vehicle carries a system to counter radio-controlled explosive devices. The exact composition of the equipment and its specific models have not yet been named.

Based on the available photographs and video materials, it is possible to draw some conclusions about the layout of the internal volumes of the Typhoon-M BPDM case. The troop compartment of the former armored personnel carrier was given to crew jobs and radio electronic equipment. The crew of the car, presumably, consists of three people: the commander, the driver and the operator of the detection systems. The workplace of the operator and the commander is equipped with electronic control and management systems. The signal from the optoelectronic station is displayed on liquid crystal screens. The operator or commander has the ability to both monitor the environment and attack the detected targets with the help of an existing machine gun. From the relative weakness of such weapons, we can draw the appropriate conclusion: it is likely that, if necessary, the BPRDM crew should request outside assistance.

The composition of the observation equipment of the machine "Typhoon-M" in addition to the systems that are placed directly on it, also includes additional equipment with a much larger radius of action. For observation of remote areas the crew of the BPMD "Typhoon-M" can use a light unmanned aerial vehicle. The small-sized UAV is equipped with surveillance systems and allows you to monitor the territory of a larger area and at a greater distance from the combat vehicle in comparison with the built-in equipment.

As is clear from the name of the new class of technology, the Typhoon-M anti-sabotage vehicle must find and destroy saboteurs attempting to attack the combat vehicles of mobile missile systems. In this case, the main focus is on monitoring the surrounding space and the search for potentially dangerous cars or people. Because of this, there is a clear bias towards equipping the BPDM with a large number of various equipment with the installation of only one rifle caliber machine gun.

At the end of August 2013, the first reports appeared about the training of crews for work on the Typhoon-M after their transfer to the troops. Courses for officers of the missile troops are held on the basis of the Serpukhov branch of the Academy of Strategic Missile Forces. Peter the Great. According to reports, the only existing copy of a combat anti-sabotage vehicle is used to train driver mechanics, commanders and operators.

Also at the end of August, the Ministry of Defense disclosed its plans for Typhoon-M vehicles. By the end of this year, it is planned to build and transfer to the front-line units the first serial BPDM. They will be sent to serve in the units of the Teikov Rocket Division. In the future, anti-sabotage machines will go into service with other units of the strategic missile forces. Among other units, the Typhoon-M will also serve in those units that operate mobile ground-based missile systems. It is assumed that BPDM will be accompanied by other vehicles of the complexes on the march and during launches. In addition, it is proposed to use anti-sabotage equipment to protect missile bases with silo launchers.