3 September 2013
65
Flooding in the Far East continues to break records, leaving the strongest mark not only on the economy, but also on the social sphere of a huge region. Floods and torrential rains from Blagoveshchensk to Magadan led to the flooding of hundreds of settlements, leaving thousands of locals homeless. The element has deprived people of not only housing, but also all available reserves, increased the risk of foci of infectious diseases, paralyzed traffic, led to disruptions in communication lines, deprived many schoolchildren and students of the opportunity to sit at their schools. According to the most modest estimates, the damage caused to the economy of the Khabarovsk Territory, the Jewish Autonomous Region, the Magadan and Amur regions exceeded 35 billion rubles. At the same time, the peak of the flood, as stated by Roshydromet, is still ahead. And despite the fact that in Khabarovsk, the water has already stepped over the 797 cm mark, and Komsomolsk-on-Amur flooded a measuring pole with a height of 8 meters. Such colossal volumes of water are also filled with groundwater, which add their centimeters to the level of flooding through eroded underground wells. 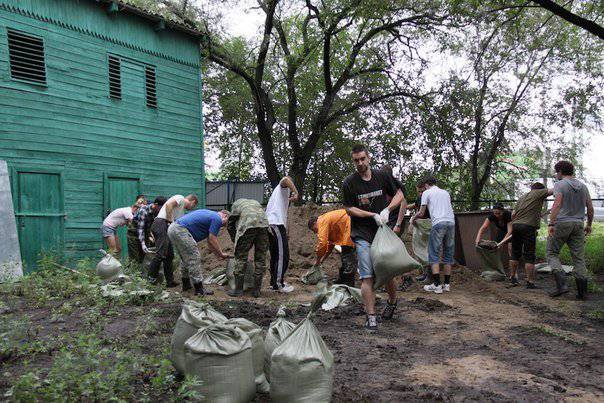 Valery Ignatenko reports (the head of one of the peasant farms, Khabarovsk Territory):

To defend their homes and farm, worked without interruption. Poured sandbags and created an artificial dam. When the sand in the village ended, they asked one of the construction companies of the Khabarovsk Territory to help us with the delivery of the material - to help not for free. We agreed to help, but only the price proposal was such that we had to refuse it. Instead of sand used construction waste that remained from the construction of the village club. While we are doing it on our own, but if the water continues to flow, it is unlikely to stand.

This short narration suggests that even in the midst of a great human tragedy there are people who are trying to extract personal benefit from it. While some people are trying to share with the flood victims, what is called the last: sending or passing warm things, medicines, food, rubber shoes, others are looking for an opportunity not to miss the "tucked" opportunity to earn. Call it disgusting - perhaps even softly.

Ordinary residents of the flooded region fear higher prices for food, drinking water and other essential goods. Khabarovsk authorities claim that such fears of citizens are in vain. The mayor's office says that the situation with prices in stores and pharmacies is under control, and if the owner of one of the outlets decides to “cheat up” the price, he is immediately summoned to the administrative carpet for an “educational conversation”. Deputy mayor of Khabarovsk Sergey Kazachenko notes that the administration conducts its own monitoring of prices in the city, and also hopes for the help of the employees of the Ministry of Internal Affairs and ordinary citizens. The press service of the regional Ministry of Internal Affairs urge residents of the city and region to share information about the unreasonable over-pricing of essential goods, using the telephone in Khabarovsk 38-73-87.

Residents of the region suffering from the flood are not only afraid of price increases, but also looting. It is because of the fear of losing the last saved property that many residents of the Amur region are afraid to leave their flooded houses. To combat marauders in the Amur Region and the Khabarovsk Territory, not only police officers and voluntary detachments from among local residents are involved, but also special technical equipment. For several days, patrols of the flooded areas are conducted using small UAVs equipped with video cameras and thermal imagers. This equipment allows you to use equipment even in the dark. With the help of the UAV, the identities of people who were involved in the theft of wires overhead power lines in the Amur region and in the Khabarovsk Territory were established.

In order to increase the intensity of the work on identifying marauders, Interior Minister Vladimir Kolokoltsev arrived in the Amur Region for a special meeting gathered by Vladimir Putin. At the same meeting, President Putin called measures to eliminate the consequences of flooding in the FEFD the most important state task. The head of state, to put it mildly, recommended the officials to break away from their easy chairs, put on rubber boots and find out on the spot what kind of help you need to give to the local population.

Putin raised the issue of feeding people who were relocated to evacuation points. Quoting the content of the letters, the president said that if food for flood victims is not properly adjusted, then he himself will have to transfer certain officials to the balanda.

Already after a short period of time, Minister Topilin reported on the task, stating that the situation with food at evacuation points was really not the best. Immediately after that, it was decided to allocate from the Rosrezerv an additional about 20 tons of products, which were urgently delivered to temporary shelters for people whose homes were flooded.

Due to the fact that the supply of drinking water to flood-affected areas is on schedule (as stated by local authorities), local doctors say that there is no point in waiting for an increase in the number of infectious diseases. At the same time, doctors call on people who are not in a hurry to leave their flooded homes, are more attentive to personal sanitation and hygiene, and also to think about urgent vaccination. The main thing, the doctors emphasize, is to use only clean boiled water and refuse to stay in the “big water” for a long time. At the same time, local residents do not always understand how to talk about careful attention to sanitation and hygiene, if water is often not enough to boil, and in order to get to the nearest store, water has to be forded.

I had to go on a rescue boat to the school, where they have now equipped a temporary accommodation center. The house in the village was abandoned because there is no opportunity to cook and just wash. Only the attic, where the children and I lived the first time, was left unburied. The garden was flooded, we still held the bird - it all died. 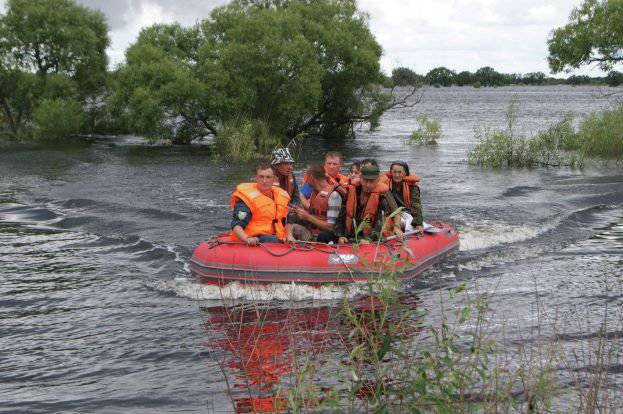 Since many schools in the region have become temporary accommodation for people who have lost their homes, it was decided to send local schoolchildren to study in those areas that were not flooded. After what time they will be able to return for their desks - a question that cannot be answered in any department.

In the strengthening of dams, the pressure on which increases literally every minute, the units of the Ministry of Defense are sent. Soldiers serving in conscription are involved in laying sandbags, helping in setting ferries, evacuating local residents to undeveloped areas.

The trouble in the Far East makes one wonder: was it possible to prepare for the flood in advance, and if yes, then why practically no measures were taken to this end? Why were many houses erected in the so-called water protection zone literally a few meters from Amur, and why did the local administration not pay any attention to this?

After getting acquainted with the information on the conditions under which the hydrological service on the Amur is forced to work (and this is a kind of semi-drum in which research equipment has a long pole and ruler), the situation with the fact that the flood has missed, by and large does not look surprising. ...

Ctrl Enter
Noticed oshЫbku Highlight text and press. Ctrl + Enter
We are
Ministry of Emergency Situations: report on the causes of flood in the Far EastEach of us can help flood victims in the Far East
Military Reviewin Yandex News
Military Reviewin Google News
65 comments
Information
Dear reader, to leave comments on the publication, you must sign in.