The first Russian Mistral will be served in Vladivostok 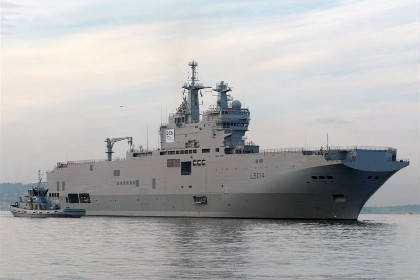 
Rogozin also said that in October 2013 of the year a meeting of the military-industrial commission will be held, at which the issues of helicopter carrier armament will be discussed. The deputy prime minister did not disclose details about the upcoming meeting, but noted that all the systems with which it is planned to additionally equip Vladivostok are incorporated into the Russian state armaments program, "and there should be no problems here."

Russia should get two Mistral-type helicopter carriers. An agreement on the construction of ships was signed with France in 2011. The deal amounted to 1,2 billion euros. The first ship ─ Vladivostok ─ should be part of the Russian fleet in 2014, and the second ─ Sevastopol ─ in 2015. The contract with France contains an option to build two more helicopter carriers in Russia, but a concrete decision on the need for their construction has not yet been made.
Ctrl Enter
Noticed oshЫbku Highlight text and press. Ctrl + Enter
We are
Rogozin visited Nizhny Tagil, shot from a tank and a gun
Military Reviewin Yandex News
Military Reviewin Google News
75 comments
Information
Dear reader, to leave comments on the publication, you must sign in.