The Tower of Babel of a New World Order 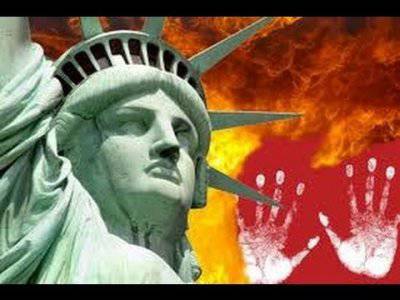 What has been happening for some time in Iraq, Libya, and Syria has one common, carefully concealed aspect - the plundering of museums by American “liberators” and the destruction of entire strata of the richest heritage of the countries of ancient culture. So, after the robbery of the museums of Baghdad by the Americans, a significant part of the production they got was thrown into the black antiques market in the West. One of the motives that leads the Yankees today to march on Damascus is the same. Illicit trade in antiques is no less profitable than drug trafficking.


However, not everything comes down to the banal robbery of treasures. There is much more at stake - control over the future by selectively destroying the priceless artifacts of the past ... Let us not forget that the capital of Syria is not only one of the oldest cities on Earth (some archaeologists give it 6-8 thousands of years), but also a city that is Islamic, Judaic and Protestant eschatology is given one of the main places.

Imagine a person who has lost his memory. He comes to another person and asks who he used to be. One who is asked can say that, before losing his memory, the questioner was his master, to whom he owes everything. Or he can say that the memory loser was his slave, who owed everything to him. And if the person who has lost his memory cannot remember who he really is, he will eventually have to follow the history imposed on him in his later life. In the same way, you can do with a whole nation: to take away his memory, destroying, for example, all the repositories of ancient knowledge (museums, libraries) or redoing their contents to their advantage.

Today, something similar is being done on a global scale. There is a preparation for rewriting the history of all mankind. This process began after the American invasion of Iraq. Experts consider the plundering of Iraqi museums (Baghdad, Mosul, etc.) to be the biggest cultural catastrophe of the century. They featured collections from prehistoric, Sumerian, Assyrian, Babylonian, and Islamic periods. After the American invasion, about 200 thousands of pieces of art and culture were stolen from museums and libraries in Iraq, most of which are of global value, including the masterpieces of the most ancient civilizations of Ur, Sumer, Babylon, Assyria and other interfluve lands - one of the cradles of human civilization.

The creation of the ideological foundation of the tower of Babel in a new world order has two aspects - the archaeological and museum.

The archaeological aspect is associated with the targeted destruction of the excavation areas both by special depth charges and armored vehicles. Natalia Kozlova, a researcher at the State Hermitage, who has repeatedly been in Iraq, testifies: “Untranscribed tablets lie in the ground in thousands. Or no longer lie. After the bombing of this place there are no signs left ... I must admit that Hussein cared for Iraqi monuments. Directly linking the glory of the ancient kings with his own rule ... Saddam not only was proud of the monuments, but also allocated a lot of money for excavation, study and preservation of cultural heritage, cruelly punishing the robbers. When he lost control of part of the territory after the 1991 war of the year, the situation has seriously deteriorated. ”

According to the report of the expert of the London British Museum John Curtis, who visited the excavation site and recorded all the damage to the ruins of ancient Babylon, 88 kilometers from Baghdad, the damage was irreparable. The culprits are US and Polish servicemen. Curtis found that most of the damage was done on purpose. For example, the Americans, unnecessarily rode on tanks along the ancient pavement street. "We, of course, guessed about the damage inflicted on Babylon, but we could not even imagine that it was so great ... The loss is simply terrible" - this is the assessment of the scale of the tragedy by the head of the British Parliamentary Committee on Archeology Lord Redsdale.

The commander of the US Marine Corps Expeditionary Force 1 in Iraq, Colonel John Coleman, officially stated that the United States is ready to apologize to the Iraqis for the destruction in Babylon by the US forces in 2003-2004. After the American invasion on the ruins of Babylon, the Fort Babylon military base was established, located directly on the ruins of ancient temples. A helipad and gas stations were also built there. Soldiers dug trenches at archaeological sites, and ancient decks, which were 2600 years old, were destroyed by tanks with tracks.

A similar situation takes place in Libya - a country that occupies the richest archaeological part of the Sahara. According to the French archaeologist Henri Lot, "The Central Sahara during the Neolithic period was one of the most densely populated centers of primitive human society."

The museum aspect of the construction of the Tower of Babel of the new world order is associated with the plundering of the repositories of artifacts of the most ancient civilizations of the planet, as it was with the museum of ancient buildings under the open sky of Garamants in Libyan Jeremiah (Garame), allegedly plundered by “rebels” who cannot even read. The artifacts are stolen, so that after some time, in a new form compiled for the needs of the priests of globalism, they are presented as “material” confirmation of the theses openly stated a few decades ago by Z. Brzezinski in the book “Technotronic Era”. Snowden and Manning have not yet been born, and Brzezinski has already written about the huge "useless mass" of people and the need to establish control over them through constantly updated computer files, dossiers:

“We are moving towards a technotronic era, which can easily go into a dictatorship ... The relevant state bodies will have access to these files, power will be concentrated in the hands of those who control information. The existing authorities will be replaced by institutions whose task will be to proactively identify possible social crises and develop programs to manage these crises ... This will lay down the development trends for the next few decades, which will lead to a technotronic era — a dictatorship in which the existing political ones will be almost completely abolished. procedures. Finally, if you look ahead, it will open up the possibility of biochemical mind control and genetic manipulation of people, including the creation of creatures that will not only act, but also reason like humans. ”

The culmination of the “technotronic era” should be the triumph of the new world order in the form of a global Empire led by a caste of “initiates” and the rest of the “contingent”, where within the inner circle they will worship the single “supreme being”.

That is why sacred relics of the peoples of the world gather in our days all over the world. The collection is a kind of research structure, which, by analogy with the Third Reich, can be called "Anenerbe" of the new world order. In Iraq, its people used the certificates of a certain “American Union for Cultural Policy”; they had information in advance about safes with exhibits of interest to them, keys to them, etc. According to the Director of the Iraqi State Department of Historic Monuments and Heritage Doni George, the Iraqi National Museum in Baghdad completely destroyed the scientific work that has been conducted over the past 100 years. When inspecting the museum, its staff found professional glass cutters left by robbers. “Not a single copy of the plaster from those stored in the museum has been touched. They took only originals, something that is of historical value ... As a result, we lost what constitutes the wealth of all mankind - priceless masterpieces of art that go back centuries to 5 thousands of years, ”said Doni George.

And in March, 2011, the media bypassed the message: Dr. Doni George, a brilliant scientist, Assyrian by nationality, died of a sudden heart attack at the airport in the Canadian city of Toronto. He was in a hurry to give a lecture to Canadian listeners on the search for treasures stolen from Iraqi museums. Beginning in 2003, Doni George’s main concern was the relentless struggle to return to his homeland the values ​​stolen by Americans from museums and stolen from archeological sites in Iraq. Doni George has never concealed that the US government was involved in the planned theft of the artistic treasures of Iraq.

You can recall some of the mysterious events that took place in Egypt during the "revolution" 2011 year. The National Museum in Cairo, located between the Mubarak residence burned during the riots and the turbulent Tahrir Square, according to media reports, was allegedly damaged and looted. In fact, something else was taking place: unknown people who appeared in the museum at the same time as the unrest began, with a great deal of knowledge, “went through” the funds of the museum. They took very little, but the most valuable, and not in the material, but in the cultural sense, without damaging a single storefront.

Similarly, during the invasion of Iraq, the first to enter the territory of this country, even before the start of hostilities of the Western coalition, were the people of Anenerbe. Something similar happened in Libya and Egypt, now the same operation is planned in Syria. These people have a special mission: finding and seizing pre-planned relics and values. Perseverance in achieving the goal of those who equip them, in no way inferior to the perseverance of the leaders of the Nazi SS with their "runic mystery", the desire to stick a flag with a swastika on Elbrus, etc. It was these people who became the first marauders who robbed museums and other state institutions with great knowledge, as well as houses and palaces with their private collections of wealthy Iraqis and Libyans. Now they want to repeat the same thing in Syria.

In addition to the banal striving for enrichment, the occult-mystical meaning is invariably hidden in the actions of these people. They do not enter the territory of present-day Iraq or Syria, but into Ancient Mesopotamia, in the capital of which, Babylon, El-Temen-An-Ki was erected - “the house of the cornerstone of heaven and earth.” This magical structure, intended, among other things, to observe the stars, is called the Tower of Babel in the Bible. Its angles corresponded to the four sides of the world, in the direction of which the military-terrorist actions of the applicants for the role of new masters of the world will now be undertaken. The plans of the occultists, capturing Iraq, Syria, Egypt, descendants of the builders of the Tower of Babel, arguing with God and scattered over the ground for it, will finally return to their cradle for the construction of the unbreakable new world order.

Ctrl Enter
Noticed oshЫbku Highlight text and press. Ctrl + Enter
We are
Ural francs - the past that did not become the futureKonstantin Syroezhkin: Transformation of China into a global power - while the myth
31 comment
Information
Dear reader, to leave comments on the publication, you must to register.