Latin America against US aggression in Syria 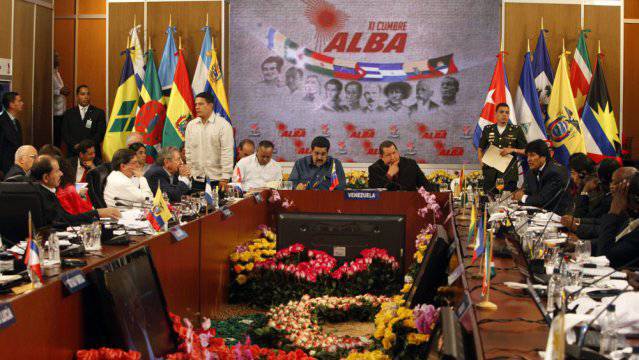 The deputy of the Venezuelan parliament Abdel al-Sabayar (Zabayar), a Syrian by birth, without losing time, left for home. Al-Sabayar explained to friends from the Arab Federation of Venezuela, of which he is chairman, that the time has come for all patriots in the Arab world to take weapon to protect Syria from threatening aggression. In Latin America, his example was followed by many people from Arab countries. Without advertising their plans, they come to Syria by different routes. The formation of the first battalion of volunteer fighters from Latin America is already being completed ...


The Latin American media write a lot these days that the Obama administration has become the main instigator of aggression against Syria. They emphasize that in preparing for a strike on Syria, Washington is using the sabotage and reconnaissance capabilities of its satellites, especially Israel, Saudi Arabia and Qatar, to aggravate the situation. As part of the policy of "geostrategic neutralization of hostile countries," Syria has now become the number one object for the Pentagon. A strike on this country is also planned to be inflicted because it has traditionally been an ally of Russia in the Middle East.

The belief of a potential aggressor in its own impunity cannot but be disturbed by the leadership of those countries of Latin America and the Caribbean, which value their independence. Even the governments of Colombia, Mexico, Chile, Guatemala and some other countries following in the wake of the USA are watching the revival of big stick methods in Washington’s foreign policy with alarm. For Latin Americans, the question is sharper: if the United States is ready to bomb a country in a continent far from America, then one day the turn of territories south of the Rio Grande, primarily Brazil, Argentina, Venezuela, will come?

If Presidents Dilma Rousseff and Cristina Fernandez de Kirchner speak about the situation around Syria, for the time being with restraint (we are for the resolution of the conflict through negotiation, through the establishment of a constructive dialogue between the Syrian government and the rebels), in their assessments the uncompromising President of Venezuela . The statement of the Ministry of Foreign Affairs of Venezuela on August 29 "strongly and firmly condemns any attempts of the imperialist powers to carry out an armed attack on Syrian territory, using the unidentified party 21 August chemical weapons as an excuse." Nicolas Maduro is convinced that the imperial scenario, tested earlier in Libya, Iraq and other countries and involving “taking possession of the region’s oil wealth and providing markets for Western goods” through death and destruction, was put into effect against Syria. The methods and objectives of the aggressors are clearly characterized: “The United States and NATO countries armed and trained squadrons of terrorists in Syria with the task of establishing and maintaining control over the country. The government of the Bolivarian Republic of Venezuela blames the authorities of the empire for putting the whole world on the brink of a destructive war with innumerable consequences for humanity. ”

Maduro has several times warned of a possible assassination attempt at the same time as the beginning of the US military intervention in Syria. The calculation of the American special services is obvious: against the background of catastrophic events on the Syrian front, the physical elimination of one of the presidents in Latin America will remain news second plan. The preparation of the attempt is carried out in a big way. This is evidenced by the arrest on the territory of Venezuela of two Colombian mercenaries who fought in the past as part of death squads. They have rifles with an optical sight. A leader of the group and eight more terrorists linked to centers in Miami, Colombia and Costa Rica are on the wanted list. Venezuelan counterintelligence does not exclude that the Pentagon and the CIA will use the Syrian scenario in Venezuela, taking into account the polarization of political forces in the country - pro-government (Bolivarian) and opposition (pro-American). And so that this does not happen, it is very important not to allow the defeat of the Syrian Arab Republic.

In principle, manipulators from Washington can create an environment of “controlled chaos” in any country in the Western Hemisphere, which they will target. For this reason, the member countries of ALBA - the Bolivarian Alliance of the Peoples of Latin America - unanimously come out with the support of the government of Bashar al-Assad.

Bolivian President Evo Morales constantly raises a Syrian theme at press conferences. He is confident that Barack Obama is unleashing one war after another “to capture natural resources, from oil to fresh water reserves.” Morales believes that in modern conditions the United States "cannot establish military dictatorships," as they did before, therefore they resort to a different strategy, "incite internal conflicts in some countries in order to get an excuse for intervention." This is exactly what is happening in Syria: “The United States is financing the confrontation in this country through Israel, now through England and now they are preparing for a military invasion. Such is the empire's strategy now: to push us, divide us into groups and organize intervention. We reject, condemn, do not accept. ”

President Rafael Correa agrees with Evo Morales, who does not tire of recalling the traditional peace lovingness of Ecuador, "rejecting" foreign intervention in the affairs of Syria, especially military intervention. " According to Correa, no country has any moral right and should not impose upon itself “the functions of a judge determining what is good and what is bad.” In an official statement by the Foreign Ministry of Ecuador, this position is clearly stated: “In connection with the possibility of an armed attack on the Syrian territory of foreign countries, the Ecuadorian government rejects any aggressive unilateral actions that violate its sovereignty.”

As we approach the day of the launching of rocket-bombing attacks on Syria, statements of Latin American governments, Latin American regional organizations, parties, and authoritative public figures are louder and louder than US aggression. Will Washington stop this unprecedented scale of protests, which captured far from only Latin America? If not, then the response of Syria, its ally Iran, the armed detachments of the Arab resistance will not be long in coming. In the chaos of the outbreak of war, the dramatic consequences of neither Saudi Arabia, nor Qatar, and especially Israel are not avoided: the targets on Israeli territory have long been defined, and the Syrian and Iranian kamikaze pilots are just waiting for an order for a combat sortie.

Ctrl Enter
Noticed oshЫbku Highlight text and press. Ctrl + Enter
We are
What you didn't want to know about England
Military Reviewin Yandex News
Military Reviewin Google News
10 comments
Information
Dear reader, to leave comments on the publication, you must to register.