Fidel Castro: "I admire the boldness of Snowden's act" 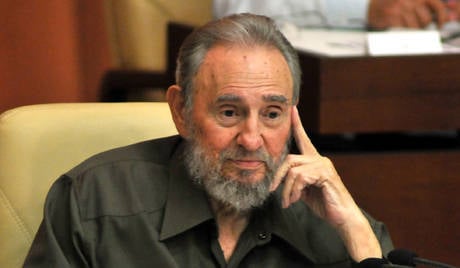 Arthur Lopez-Levy, a professor at the Denver Institute in the United States, spoke to the Voice of Russia about liberal reforms in Cuba, the Cuban leader’s reaction to the loud exposure of US intelligence by Snowden and the prospects for relations between Havana and Washington.


The leader of the Cuban revolution, Fidel Castro, came down with harsh criticism of the Russian edition of Kommersant. An article appeared in the newspaper stating that ex-US intelligence officer Edward Snowden could not fly from Moscow to Havana on June 23 due to the fact that Cuban authorities succumbed to US pressure and refused to board the plane with the whistleblower of American intelligence services on board.

“No one has the right to speak on behalf of Cuba,” he wrote to the commander in his Internet column “Reflections of Fidel,” calling the publication in Kommersant a “paid lie”.

Fidel Castro also gave his assessment of the actions of Snowden, who informed the world about global espionage from the United States:
"I am delighted with the courage of Snowden’s deed. He has done us all a tremendous service, revealing the repulsive policy of a powerful empire that lies and deceives the whole world."

Meanwhile, the main question - why Snowden did not fly to Havana and had to stay in the transit zone of Moscow’s Sheremetyevo Airport for more than a month - was left unanswered.

Spanish political analyst Paris Alvarez Martin does not exclude that Washington could still put pressure on the Cuban leadership. In an interview with the Voice of Russia, he noted:

“Undoubtedly, the Obama administration threatened Havana with further sanctions if this Caribbean country granted political asylum to Edward Snowden, and with very serious sanctions. The fact that there was no single position on Latin American leaders at that time also played a role. In no case is it a blow to the image of Havana, which is a symbol of American anti-imperialism, a situation that demonstrates that countries with common positions and goals should support each other, including le forming geopolitical blocks ".

In turn, Arturo Lopez-Levy, a professor at the University of Denver in the United States, an expert in relations between Washington and Havana, doubts that the Obama administration has threatened Cuba with sanctions. In an interview with the Voice of Russia, he stated:

“The real state of relations between the two countries makes it difficult to believe in the information published in Kommersant. Let's take a look at what is happening today in Cuba. This Latin American country has embarked on the path of reforms that pursue very pragmatic goals. Note that the ideas of the world revolution "gradually fade into the background. The Cuban leadership is more interested in partnering with the United States than it sees in its northern neighbor an enemy. It is not at all about the loss of sovereignty by Havana. It is about mutual concessions that will have beneficial consequences for Havana and Washington.

The liberal economic reforms of recent years in Cuba demonstrate that this country is ready to cooperate in a number of areas. The country is interested in investments, including from the United States - the largest economy in the world. It is unlikely that Havana is ready to spoil relations with the States because of Snowden. Yes, he is a whistleblower who informed the world really important information. In this he can be cute Cuba. But ideologically nothing connects him with the Island of Freedom, he is not the "ideological colleague" of Havana. As we see, after weighing all the pros and cons, the Cuban leadership decided not in his favor, and took it on its own. "

Arturo Lopez-Levy does not consider himself an optimist in the future of relations between Havana and Washington, preferring more the term "realist". In particular, the expert is confident that the United States should not expect a quick end to Cuba’s trade and economic embargo:

“I think that this will not happen in the three years that remained for Obama as head of the White House. However, we see that more and more countries are demonstrating their rejection of the Cuban blockade, among them serious world players. Termination of the embargo is only a matter of time , and relatively small.

Cuba is becoming an increasingly prominent player on the world stage, it has excellent relations with Russia and China, it successfully restores ties with the former Soviet republics and the Baltic countries. Havana continues to be a heavyweight in Latin America, leading the Community of Latin America and the Caribbean (CELAC) this year. It must be said that dissatisfaction with Cuba’s trade and economic blockade also exists in the United States. In particular, many entrepreneurs are interested in developing joint business projects with the republic. I am a realist, the blockade will not be canceled instantly, but we will see significant progress in this direction in the very near future. "